This week, I've decided to focus on an American Author who writes books about France and living in Provence. Oddly enough (because I'm featuring him), I DIDN'T LIKE the book I read by him! 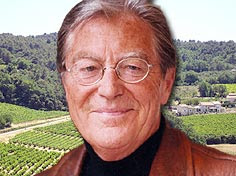 Peter Mayle was born June 13, 1939. He spent 15 years in the advertising business, first as a copywriter and then as a reluctant executive, before escaping Madison Avenue in 1975 to write educational books for children.

In 1990 Mayle published A Year in Provence, which became an international bestseller; his books have since been translated into more than 20 languages, Mayle has contributed to The Sunday Times, the Financial Times, The Independent, GQ, and Esquire.

He and his wife, Jennie, and their dogs live in the south of France. 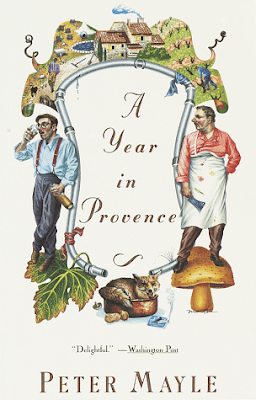 So, the one and only book I have read by him was "A Year in Provence." I read it after about 20 (possibly more) people suggested it to me as a book I would absolutely LOVE! I live in France, I love books, and I love food (vegan food, but food nonetheless), and they had all LOVED the book, so they just knew it was for me.
I unfortunately found it exceedingly boring and, well, gluttonous. It seemed like the whole book was Peter Mayle acting like an idiot then going into restaurants, eating really disgusting totally not vegan food, commenting on it (snobbishly, if I do say so myself), and then feeling full. I know there was more to it than that, but that's just how it felt to me. I also found Peter Mayle to be slightly snobby, and I can't help but wonder what France he is living in. As his descriptions are NOTHING like the France I am living in today.
With 89 5 star reviews on amazon and only 7 one star reviews, I really somehow must have missed the genius behind it. Because really, the ONLY good thing I have to say about it is that it was really well written with beautiful (and sometimes, unfortunately, grotesque) descriptions. Peter Mayle at least knows how to write. 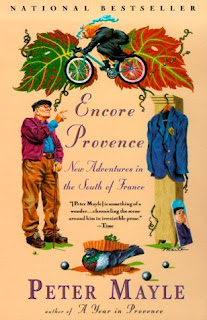 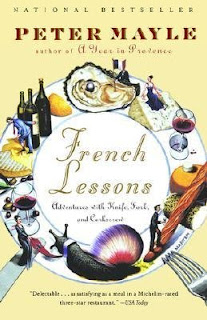 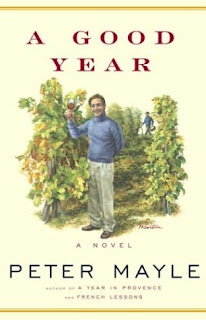 Because of my incredible distaste for this book, I was just not able to read Peter Mayle's other books about Provence, all of which my aunt had let me borrow. I just couldn't read more snobbery about food and more fiction about Provence.

So, since I disliked "A Year in Provence" so much, you might be wondering why I chose to feature Peter Mayle this week.
1)I know the book was immensely popular, so just because *I* didn't like it doesn't mean *you* won't like it. So, on the off chance you hadn't heard of Peter Mayle, I wanted to bring him to your attention.
2)I think it is important that people understand that Peter Mayle's view of Provence is exceedingly skewed. What he has presented in A Year in Provence, and probably his other books, is a fantasy about living in Southern France, not a reality.
3)It's been a very long time since I posted a review that was actually NEGATIVE, as it's been so long since I read a book I didn't like. I wanted to show you guys that I really don't love ALL books, in case you'd forgotten.
4)Sometimes I like being mean; it can be so fun to say mean things!! :-P (I'm just kidding about this one, in case you didn't get that).

And now that concludes this week's French Friday! I do hope you've enjoyed your time here! In the meantime, if I somehow peaked your interest, you can check out Peter Mayle at his website here. And don't forget to check out Charlotte's weekly French Friday Contribution at The Book on the Hill.

The biography was copied without permission from his website.
Posted by brizmus at 4:16 AM
Email ThisBlogThis!Share to TwitterShare to FacebookShare to Pinterest
Labels: ff

J'en ai entendu parlé, mais ils ne m'ont jamais tenté bizarrement... :) Thanks for the honest review, it definitely doesn't sound like something I would enjoy.

I'm thinking of trying one of Michael Sadler's books someday though, have you read his series ? There's An Englishman in Paris, An Englishman Amoureux, An Englishman à la Campagne. If you have I'd love to hear your thoughts about them.

Oups, forgot to say : I love the covers of these books !

I actually bought his A Good Year at a used book sale because I liked the movie (based on the book) starring Russell Crowe. However, after reading what you wrote, I will be sure to read it before I acquire anymore of his books just in case I come away with a similar opinion.

I'm with Charlotte. I love these covers.

I have yet to read any of these books as, unlike the 20 or so people who told you you'd love them, I've had a similar number all telling me that they are boring and I won't enjoy them. Thanks for an honest review which seems to confirm this.

You are so mean!

Just kidding. I always find it interesting how subjective our tastes are. I've had experiences when I can say that the writing in the book was good, and it's really popular, but I hated it! At least you know not to waste your time with anymore of his work. And won't either. Negative reviews are good when they explain why you didn't like the book. It' helps people like me know when not to bother. I've got a long enough TBR as it is. Thanks!

Love your honesty. I guess a person's tastes in books is as individual as they are. It's funny though because no one has ever said to me "Oh you live in London, you must read {insert book title here}, you'll love it." Weird, isn't it?

I never read these books but my mum loved them, and I really enjoyed the tv series that made of it way back when. Shame the books didn't grab you! Maybe try the tv show if you come across it. It's English rather than American--and I always thought that Peter Mayle was English!

My mother read at least some of these, and I figure I have them to thank for all those family summer holidays in the south of France. They don't sound like something I'd enjoy either, to be honest.

This sounds like a book I will avoid. The snobby quaility alone would turn me off. Maybe it was lauded because as you say it was well written with sometimes beautiful descriptions. Some people prefer wordsmithing to story telling. I'm more interested in stories.

Thanks for the honest review! His books don't sound like ones I would read and I appreciate your honest opinions!!

Great feature! His books don't relaly seem like ones I'd normally pick out, and I'm glad I'm not missing much, lol. This meme is really adorable, and I hope you continue it! :D

OK, here I am! Now I'll tear you apart for daring to not love one of my favorite books! Just kidding. I'm open minded enough to admit that others may have opinions that differ from my own.
But I will explain that the reason I love this book so much (and the rest of the series as well) is because Mayle is such an amazing author that reading his books transport me to another place and makes me feel like I'm really sharing his experiences with him and meeting all of the interesting and colorful people that he interacts with. I love his descriptions of the food and wine, and the pleasure he gets out of them, even though I'm not a drinker and I keep kosher so I couldn't eat any of this food anyways. Actually, ever since reading these books I've been longing to try truffles and I was so excited when I went to a cheese shop last week that actually had cheese with truffles in it (not common fare, in Israel) and I got to try it. Perhaps my pleasure in these books, as well as in other travel memoirs, has to do with the fact that I've never had the opportunity to do much traveling and so I appreciate authors who can make me feel like I have. So there you go!