Review: A Blue and Gray Christmas by Joan Medlicott

So I know that Christmas is over. We're now at the 12 day mark, which I'm pretty sure is the official time to start taking down Christmas decorations. But I DON'T WANT IT TO BE OVER!!!! I'm not ready yet! And besides, my boyfriend and I still haven't gotten the chance to celebrate Christmas together. I defo will NOT be taking down the decorations before then. So, to keep the spirit alive, I've got a review for you guys today of a Chrismasy book! YAY! And then when I finally DO get around to celebrating Christmas with the bf, I'll have another Christmasy review. YAY encore! :-) Then perhaps I'll let Christmas be over in the blog until next season.
So, without further ado. . . 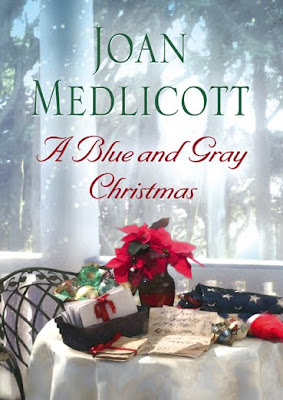 Title: A Blue and Gray Christmas

Whe Should Read It? People interested in the Civil War, people that like cute, quick stories, and definitely people that have read and enjoyed the other Covington Ladies books!

What I Have to Say: It's hard for me to really know what to say about this book. On the one hand, the premise was wonderful and the story itself was intriguing and engaging. I found myself wrapped up in the lives of the Ladies of Covington as the read through the old Civil War letters and discovered new things about themselves and the world in the process.
The letters themselves were extremely well-written, and I really felt as if I was reading things from the points of view of these two Civil War soldiers - one a confederate soldier, one a Union soldier. Joan Medlicott did a great job of giving them separate, distinct voices.
On the other hand, there was something about this book that was only so-so for me. The writing and ideas all seemed kind-of scattered, and there were a couple back stories going on that seemed to have NOTHING to do with the main story. This could have been okay, but to me it felt unnecessary, as if she was just trying to make the book longer. It's entirely possible, though, that this is because I haven't read any of the other Covington Ladies novels, so I sort-of came into the middle of it all. That aside, it also seemed like nothing ever actually happened, and when the occasional thing did happen, we heard about it several times from several different people.
So, as you can see, I'm torn. I loved it, but at the time time, I only sort-of liked it. It's heasy to say, though, that it was a quick, enjoyable, easy read.

Summary (from Amazon): In this stunning holiday story, a cache of Civil War-era letters and diaries sweeps the ladies of Covington up into a dramatic and heartwarming historical saga that inspires them to plan an unforgettable Christmas for two families forever changed by war.

When a rusty old tin box is unearthed at the Covington Homestead, longtime housemates Grace, Amelia, and Hannah discover that it contains letters and diaries written by two Civil War soldiers, one Union and one Confederate.

The friends are captivated by the drama revealed. The soldiers were found dying on a nearby battlefi eld by an old woman. She nursed them back to health, hiding them from bounty hunters seeking deserters. At the end of the war the men chose to stay in Covington, caring for their rescuer as she grew frail. But while their lives were rich, they still felt homesick and guilty for never contacting the families they'd left behind.

Christmas is coming, and the letters inspire Amelia with a generous impulse. What if she and her friends were to fi nd the two soldiers' descendants and invite them to Covington to meet? What better holiday gift could there be than the truth about these two heroic men and their dramatic shared fate? With little time left, the ladies spring into action to track down the men's families in Connecticut and the Carolinas, and to make preparations in Covington for their most memorable, most historic Christmas yet.

Disclosure: Thanks to Sarah from Pocket Books for sending me this book to give an honest review.
Posted by brizmus at 11:36 AM
Email ThisBlogThis!Share to TwitterShare to FacebookShare to Pinterest
Labels: 3 1/2 stars, Christmas

I shall keep this in mind for the next festive season but it doesn't sound like you were that sold on it.

Great review :) as always thank you for your honesty :)

good review. i've never heard of it before!

Sounds interesting...but since it involves history, and it takes me a long time to read history, (which is what's happening right now with Beautiful Creatures), I don't know if I should read this one. It sounds like a great read for Christmas, though! :)

Great review, I had never heard of this book before.

Hey Audrey...did you get my message? It might have ended up in your spam folder...really important.