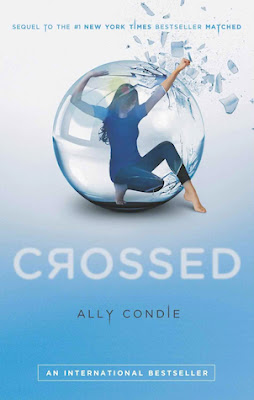 Who Should Read It? Those who can find beauty and action in the subtle, who can find dialogue to be fast-paced, who enjoy beautifully written, great stories that take their time. If you're looking for non-stop action, this book probably isn't for you. If you're a reader like me, totally check it out.

What I Have to Say:
I read Matched a VERY long time ago, and I ADORED it. I adored Crossed (almost) just as much. Crossed was AMAZING! Seriously, I loved it! I sometimes have trouble with books (and movies, for that matter) that are too action-packed. I get bored with the action, feeling like there's just never enough substance. Crossed, while being a YA romantic action adventure story, definitely has its fair share of action. It's fast-paced and non-stop. But, it's chock full of dialogue and thought and substance. To the point where I could understand if there were maybe some who found it slow.

Th world Condie has created is absolutely terrifying but totally believable. What really struck home for me is that, despite being totally horrified by what was happening, by the actions of the government, I could totally see how something like that would work, for population control, to save the human race from our impending doom. It's refreshing, though, the characters that Condie has created. Cassia and Ky are like a breath of fresh air in this crazy world, seeing through the government, finding beauty and peace in the smallest of things, finding love in places they would never have thought to look.

I thought that Crossed was beautifully written, with poise and grace and poetry in all the right places. The story is heart-warming and frightening, and the characters are lovely. The ONLY problem I had with this book was the double perspective. It was written alternating between Ky's perspective and Cassia's perspective, and I don't feel like Condie really did a great job differentiating between their perspectives.

Final verdit - while I can see why this book might not appeal to those needing constant stimulation, I absolutely adored it, and I can't wait to read Reached, the final book in the trilogy!

Summary: In search of a future that may not exist and faced with the decision of who to share it with, Cassia journeys to the Outer Provinces in pursuit of Ky - taken by the Society to his certain death - only to find that he has escaped, leaving a series of clues in his wake. Cassia's quest leads her to question much of what she holds dear, even as she finds glimmers of a different life across the border. But as Cassia nears resolve and certainty about her future with Ky, an invitation for rebellion, an unexpected betrayal, and a surprise visit from Xander - who may hold the key to the uprising and, still, to Cassia's heart - change the game once again. Nothing is as expected on the edge of Society, where crosses and double crosses make the path more twisted than ever.

Cover Story: Beautiful! I love the blue cover and the girl trying to escape the ball that is her world. It's perfect!