Review: Something About Sophie by Mary Kay McComas 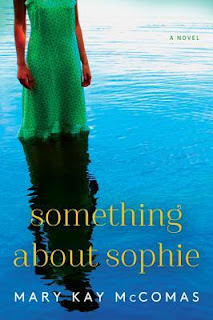 Title: Something About Sophie

Who Should Read It? Into romantic thrillers? Want a book that will keep you on edge and guessing till the end (just don't try too hard to figure things out, otherwise, you might)? This book is for you!

What I Have to Say:
Sophie is your typical small-town girl from your typical small-town. The only difference is, she's adopted. She's never really cared about her birth parents, though, so this doesn't really affect her. Until she is called to another small town by someone who claims to know something about her birth mother. But by the time she gets there, he's already dead. And that's when things get dirty...

This book was interesting in that all of the things that I liked about it were also things I didn't like. I find that often in books, characters are purposefully made to overreact to everything so that the drama can continue continue continue. And my reaction is often "NO ONE, not even a fake person, would EVER react that way." I don't like the overreactions, and I wish they would just react like a normal person. In Something About Sophie, it's almost as if the opposite is true - the drama is able to continue on in large part because the main character doesn't react. She seems perfectly at peace with herself about everything and yet bad things just keep happening. I liked this. But I also didn't like it. She was TOO at one with herself, TOO perfect, and it annoyed me sometime how she just didn't react or didn't care when it seemed like she should. It was SO the opposite of what I don't like that it ended up being equally bad.

Still, as a character, I liked her, along with all of the quirky people surrounding her. And even if SHE didn't care about her past and about why the things that were happening were happening, I cared for her.

I also enjoyed the way that the plot sometimes seemed to keep developing despite itself, if that makes sense. I had several ideas about who the culprit could be throughout (and in the end I was right), but I was never entirely sure and thus found myself dying to figure out what was going to happen! This thriller really had a thriller feel for me. Unfortunately, because of this, I was never really able to get in to the love story, which seemed totally forced and totally unreal (but then, I've never been one for books about love at first sight. I'm more into the love is a fight kind of books). It's fast and exciting with lots of twists and turns, but sometimes the twists and turns fell flat, because there seemed to be nothing provoking them.

Anyhow, all in all, I enjoyed the book, and if you're into romantic thrillers, I would definitely recommend this book. There are twists and turns all over the place, and it will keep you on the edge of your seat until the very end.

Summary: Answering a call that summons her to a stranger's deathbed, a reluctant Sophie Shepard is too late to hear what he was so anxious to tell her. What was so important that a dying man would think of her in his final moments? With the help of Dr. Drew McCarren, Sophie begins to dig into her past, setting off a chain of events that chills the quiet town of Clearfield, Virginia to its roots. With part of her wanting nothing more than to put Clearfield behind her and run back home, Sophie knows she won't rest until she discovers the truth. But growing closer to the residents also means uncovering their dark secrets: about the woman who gave her up for adoption, the mysterious part these strangers played, and the life she never knew she nearly had. Something About Sophie is an unforgettable story about the power of love...and the things people will do, both right and wrong, to protect it

Cover Story: For a (granted very very short) little while, I was okay with books that had a headless person on the cover. Then, I became annoyed. While I do, overall, think this cover is quite lovely. . .I just wish the body had a head. I really do.