Bonjour, and welcome to this week's version of French Friday, where I'm going to introduce you to an old French author that was recently introduced to me, Rene Barjavel.
Maybe you've already heard of him. 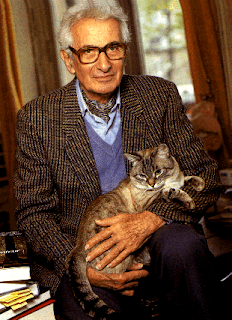 Rene Barjevel is a French author who lived from 1911 to 1985. For the most part, he is known for his science fiction, and also for being the first to write about the grandfather paradox in time travel. Basically, he is awesome. Check out Rene Barjevel's English Wikipedia page to learn more about him. 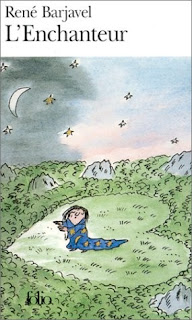 A couple of weeks ago, a friend of mine lent me a book called "L'Enchanteur," or in English, "The Enchanter," although after reading the book, I would go more with "The Wizard." I absolutely couldn't put it down. It was an entrancing version of the story of Merlin, Arthur, Lancelot, Guinevere, the Lady of the Lake, and all of the other characters of that time period.
The writing was beautifully descriptive, at times hilarious, at times devastating, and always intensely engaging. It was, without a doubt, the greatest "Arthur" book that I had ever read. It was also the only one that I had ever read that focused on ALL of the characters. I had never before even heard the love story between Merlin and Viviane (aka the Lady of the Lake), and reading about it for the first time via Barjavel's passionately beautiful prose was the best introduction to them I could have had. I'd never even heard of Perceval or, oddly enough, Galaad (apparently I am not well versed in Arthurian legend). In this one amazing book, I read all of their stories and more!
"L'Enchanteur" was told so differently than I expected, and Barjavel's way of weaving ALL of the stories together, via the search for the grail, to make them seem just one was just marvelous, as was the story itself and the world in which it took place. This book, I thought, as I was reading through the last chapter, is a book that everyone NEEDS to read. 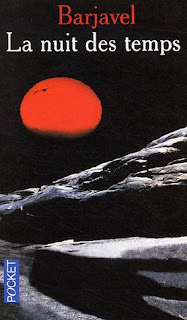 So, when I was done, I was so excited to write my review, to be able to share this amazing read with you guys, only to discover that THIS BOOK WAS NEVER TRANSLATED INTO ENGLISH! This book, written in 1984, known today is one of Barjevel's best works, was never translated into English. A modern tragedy is what I call that.

Luckily for us, though, some of his other works (5 out of the 29, it would appear). And that very same fried of mine just so happened to lend me one of the books that was translated - La Nuit des Temps, translated as The Ice People. I'm looking forward to reading and reviewing it, as if my feelings about "L'Enchanteur" are any indication of how I will feel about this book, it's going to be AWESOME!!
Some other Barjavel titles that have been translated into English:
-Ravage, translated as Ashes, Ashes
-Le Voyageur Imprudent, translated as Future Times Three
-Tarendol, translated as the Tragic Innocents
-Le grand secret, translated as The Immortals

Know that I am serious when I say - if you ever come across any of these books, you should read them without hesitation!
And don't forget to check out Charlotte's weekly French Friday post!
Posted by brizmus at 10:26 AM
Email ThisBlogThis!Share to TwitterShare to FacebookShare to Pinterest
Labels: ff

boo hoo, L'Enchanteur, has not been translated - this is the one i want to read based on your review. i'll have to see what the other books are about.

How cool. I've never heard of him before.

Wow, this awesome but I've never heard of him?! And, yeah, I was all excited to check it out, but then read it wasn't in English, lol. I wonder if it's worth the effort to learn French... ;)

I wish I payed attention in French class lol! The book sounds amazing and I will definitely be on the lookout for some of his works that were translated into English!

I enjoyed this post very much. i'm afraid I had not heard of this author either. Great photo of him with his cat.

I was so excited and ready to read "The Enchanter" when you hit me with the "not in english".. What a bummer..I would love to read this book. Do you think they will ever release in english.??
Thanks for great review.

Oh what a shame that what sounds like a great book has not made it into English. I love Arthurian legend.

IT's a great Idea! If I read anything in french I could contribute my "Quebec French-ness"
Lachez-pas les filles =)