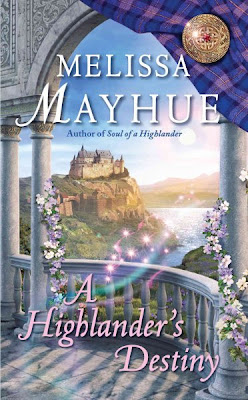 Who Should Read It: This book is definitely for people who thoroughly enjoy formulaic paranormal romance.

What I Have to Say: It's hard to explain why, but this book really just didn't do it for me. I enjoyed reading it, for the most part, and there was suspense and plot twists galore, but in the end it mostly left me indifferent. I know it was a formula romance, but even keeping that in mind, everything just seemed so. . .contrived. This could be because I've just read too many formula romances lately, but putting that aside, I still had quite a few problems with this book.

There were faeries, which I thought I would love, but really, the faeries might as well have been human for all the fairy action going on in the book. I haven't read many books about faeries, though, so maybe this is always the case?

Destiny, the heroine, seemed like a cool girl, except that her actions seemed to contradict all of the things she thought about herself. She was always saying or thinking one thing and then actually DOING something completely different.

Then there was the love story between Destiny and Jesse, which would have been sweet, except that it was totally unbelievable. These two people, both completely weary of love, both supposedly with these huge iron cases around their hearts, suddenly miraculously falling in love. . .after just spending a few days together and barely even getting to know each other. I just didn't buy it. Which made it especially hard for me to "buy" the rest of the story. Of course, Destiny and Jesse were fun together, and the way their interactions definitely got a laugh out of me on more than one basis.

I guess I should say now that this is the fifth book in the series. And that I haven't read any of the other ones. One of the things I liked about it was that I didn't feel lost at all; I never once felt like I might have missed something in one of the previous books. The story definitely stood on its own, and the story itself was quite exciting and intriguing. Some of the twists Mayhue weaved into the mix were unexpected and delightful.

In the end, I think this will definitely appeal to the people towards whom it is geared: those that love paranormal romance. And I'm guessing if you enjoyed the other books in this series, you'll probably also thoroughly enjoy this one.
Yet I'll warn you - don't be expecting anything TOO special.

Summary:The Nuadian Fae have discovered a long-forgotten path to dark powers and all that stands between them and the helpless Mortal world is Jesse Coryell. Another failed romance and Jesse's disillusioned. Even spending time in the Realm of Faerie and training as a member of the Elite Guard hasn't made him happy. Something he can't identify is missing in his life and according to his magically gifted niece, Rosie MacKiernan, that something is his destiny. When Jesse intercepts a letter from Destiny Noble, a young woman desperately searching for her missing younger sister, life and destiny collide. Not even Destiny's Faerie heritage and her ability to see glimpses of the future can protect the pair from the unknown evils they'll face. But, if they're lucky, the magic of True Love just might save them both before it's too late...

Disclosure: This book was sent to me by Pocket Books to give an honest review.
Posted by brizmus at 5:36 PM
Email ThisBlogThis!Share to TwitterShare to FacebookShare to Pinterest
Labels: 3 stars, tour

Great review! The cover is so pretty, haha. I can see where you're coming from with contrived, and it is a bit hard these days to find a very unique, flowing paranormal romance. It still sounds like a light, interesting read though, thanks. :)

Love the cover! But a formulaic type book? Eh...the fifth book and you didn't get lost? That's good! I might check this one out in the libary...

Thank for the review! :)

Hmmm...I'm thinking I'll miss this one. It sounds okay but not anything more. I like to feel passiona about a book even if I passionately dislike it. At least that is emotion. Great review!