This week, I'm going to talk about a series of French fantasy books that I absolutely LOVE! It's a series of seven books about a young witch namedTara Duncan. Tara has been referred to as Harry Potter's French little sister. They take place in a world called AutreMonde (OtherWorld). We don't really learn too much about it in the first book, although I can already tell it's a world I want to know more about! 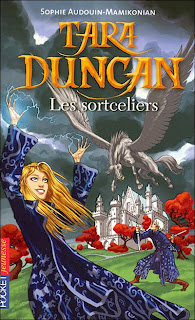 Here's what I had to say about the first book when I read it:

This book is adorable! It took me a little while to get into it, because in the beginning I couldn't help non-stop comparing it to Harry Potter. This was hard not to do because there are just so many similarities. But the fact is that, while Tara Duncan is a French female Harry Potter, as they say, she is also someone else entirely. She is quirky and fun and adorable, and in the end I became captivated by her and her friends and their adventures, and I'm looking forward to reading about the next of her magical, fantastical adventures.

If this sounds interesting to you, go check out the first three chapters in English at the website. Beware, though - the book itself is not yet released in English, and, as of yet, there is no set date that I know of. I'm sure, though, that it won't be long!
Posted by brizmus at 8:04 AM
Email ThisBlogThis!Share to TwitterShare to FacebookShare to Pinterest
Labels: fantasy, ff

J'ai entendu parler de cette série mais ne l'ai jamais lue. You made me want to read it now ! Welcome back to the French dimension. :)

If this is as good as Harry Potter, then I am 100% in. Who doesn't love a bit of HP magic? I don't really like the cover though.

My French isn't crash hot but I love the sound of this series. I'll definitely check out the translated chapters. Thanks for the heads up.

By the way, I totally forgot to tell you : my BF gave me The Graveyard Book for Christmas...! He had bought it before I received your Secret Santa gifts, and he kept his frustration secret until I opened it...! So now I've got two of those ! :)

I have a blog award for you here =D

I love it Harry Potter's French sister-I want to improve my French-I may just buy this in French-my dad bought me some cookbooks for Christmas-I chose Macarons and Best Cakes-not sure why it is called Best Cakes and written in French. Have you ever been to Chapters-Chapters downtown Ottawa has an unbelievable French book sections. (you can see them in my post from last Sunday) In My Mailbox.

Wish I could speak french, heck any old language would do. The covers are cute