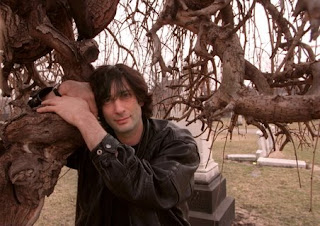 Neil Gaiman is my absolute FAVORITE author of all time (I'll actually theoretically be hosting a Neil Gaiman week some time in the near future, so keep your eyes peeled for that), so I am very excited for him! I'm also hoping this will motivate him to write another adult novel in the near future. I feel like it's been a while. The last was Anansi Boys, if I am not mistaken, and that was over 4 years ago.

They officially announced the news to the world today in Neil Gaiman's blog. Check it out here!!

Just wanted to drop by and say thanks for participating in The Saturday Network!

And best wishes to the two! :)

Very cool ...Marriage is the best.

You won some awards on my site :)

Exciting news! And LOL...I had never heard that song or seen the video...too funny! She is very attractive. He's a lucky guy and she's a lucky girl for that matter!

It is so sweet that you are so excited for him. I love being married, my hubby is just the best!

Ooh! Just wanted to let you know that you forgot a tiny important detail when you entered our contest. And I didn't want you to regret it because you've already done a lot of entries!
Anyway, you forgot to make up a dino name, which is actually required for one to enter the contest. So maybe you should go back and insert the dinosaur name you thought for yourself. That's all! Thank you for spreading word about the contest :)

Here is the link.

That is some terribly exciting news! I'm going to have to check out his original post. Thanks for the heads up.

omg! i thought he was already married with kid(s)???
I love Gaiman and wish him the best!