Okay, so I see a lot of movies (YAY!!!! I love movies! And my UGC cinema card is one of the greatest thing about France), and lately it seems like a lot of those movies were originally books.
SO, I've decided that, when I see a movie based on a book that I have already read, I will write about it here in Brizmus Blogs Books! YAY!!!! Just try telling me you're not excited!!!!

Last night, I saw "the Road," which was based on the book by Cormac McCarthy of the same title.
Unfortunately, I read the book before having a book blog, so no review to link you to. 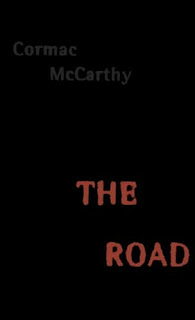 THE BOOK: I only sort-of liked this book. I thought it was beautifully written, and the relationship between the boy and his father was intense and beautiful, the kind of pure, undying love that I'm just not used to seeing. And yet, it was also slow and boring. At times when I THOUGHT it should have been intense, I just didn't feel the intensity of it, I didn't feel the stress that I theoretically should have been feeling.
So, while I enjoyed it, the overall impression that it left me with was: BORING!
I know a lot of people will hate me for saying that. 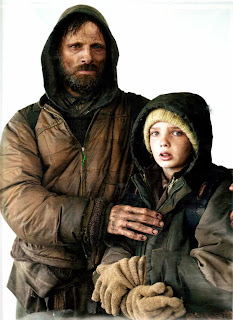 THE MOVIE: The movie was a different story, but not entirely. I really thought that there was no way a movie would be able to portray the relationship between the boy and his father with the same majesty, beauty, and intensity of the book. Cormac McCarthy's words were carefully chosen and used with grace, and it seemed to me like that might be next to impossible to transfer to the big screen.
I was wrong.
Watching the movie, I felt their relationship so much more intensely than I did while reading the book. It was confusing and unsure and yet perfect and innocent at the same time.
Seeing the images I had previously only imagined also helped me get a better sense of the tension and stress I had thought I should be feeling while reading the book. It all became so much more real to me, and there were several times in which I actually found myself holding my breath in anticipation.
And yet, it was also exceedingly slow. So slow that I at times found myself bored. Which is what I meant when I said that it was not entirely a different story. The boredom during the movie, though, was significantly less than during the book. Thus the overall impression that it left me with: INTENSE!

Verdict: the MOVIE was BETTER than the BOOK!!

Have you seen the movie? What did you think?
If you want a great review of this book by someone who loved it, check out Rhiannon Hart's review!
Posted by brizmus at 9:07 AM
Email ThisBlogThis!Share to TwitterShare to FacebookShare to Pinterest
Labels: bookstomovies

Hey! I haven't seen it or read it but it is good to know the movie is better. Maybe it's the Viggo power? ;)

(Sorry, having some troubles today.)

Hey - great post. I loved the movie, too, but I'm not sure I agree with you that the movie was better than the book. I'd be willing to concede "as good", maybe. :)

You're definitely right, though, that the movie very, very good (if a bit slow at times). Yes, it is incredibly, incredibly intense - and rather disconcerting.

I actually did a similar post about the book and movie versions of The Road - I'd be interested in your thoughts: http://thenewdorkreviewofbooks.blogspot.com/2009/12/road-sparse-but-stunning-bleak-but.html

I haven't read the book nor seen the movie. Honestly, the only reason that made me hesitate was... Viggo ! The trailer actually scared me, so I wasn't really drawn to the movie. I may give it a try when it comes out in dvd though.

The movie is NEVER better then the book. Fact. At least, in my experience. But I haven't seen the movie yet, so we'll see.

I haven't watched the movie, I think I should based on your review :)

Great review. I've been considering reading this book, but now I think I'm going to pass. I had signed up for a Read the Book See the Movie Challenge at Ready When You Are C.B, where you review both the book and the movie based on it, but I can't seem to make the time to watch the movies. I'm really bad at these challenges, though this seems like it would be a great challenge for you.

Audrey-please stop by I have an award for you.

I haven't watched the movie, but have read the book, and totally agree with what you said... and thought I was the only one because of all the positive reviews I'd read... I just thought it was slow and boring... didn't feel depressed, or hopeful, or whatever else others felt. I've just finished another book (31 hours) that I had a similar reaction to... I need to write that review.

Glad to here you say it as personally I'd find it very difficult to believe that the film could be any worse than the book - difficult? I'd even go as far as impossible.

Wow! A movie better than a book! That is amazing. I have not seen this movie or read the book. I am going to have to look into it.

Fab post! I guess it is kinda unusual for the film to be better than the book but it is also great.

I really really liked the book. I saw the film recently and was impressed how faithful they were to the book. I thought overall it was less powerful than the book, but the scene when they take the black guys clothes was totally more heart breaking on screen. The scene with the coke can, on the other hand, screamed PRODUCT PLACEMENT on screen, whereas in the book it was touching.

Also, the score. WOEFUL. INTRUSIVE. CLUMSY. What the hell was Nick Cave thinking??

Posts on the book, the film and the coke can here:

The Coke scene: The "product placement" didn't bother me in the least - in fact, it made the scene more genuine. What was it supposed to be? An Acme Brand Cola?

The scene was a great way to illustrate how different the world The Boy grew up in is from the world before the apocalypse. He's never had a Coke, and doesn't even know what it is!