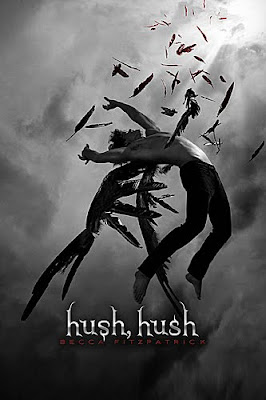 Who Should Read It? EVERYONE!!! Especially those who love YA supernatural!

What I Have to Say: Um, can I just say WOW! It is so awesome when a book lives up to the high expectations I have for it, and Hush, Hush absolutely did! After all the non-stop raving reviews I had read, I was almost afraid to read it. I shouldn't have been.

Becca Fitzpatrick easily pulled me into the world of Nora and Patch, and within the first few pages, I was hooked. Even after just the very first page, I felt like I couldn't put the book down (and I didn't!). When Patch finally made the scene, I actually felt a frisson of anticipation, of excitement.

I was afraid I wouldn't like him, as I'm not really a huge fan of the "bad boy" persona, but Patch is more than just a bad boy. He has the look and the front, for sure, but he's also sweet and sexy to the core. Really, he's mostly a good guy. And he and Nora are perfect for each other. They absolutely complement each other perfectly. The way they sort-of repel each other while at the same time being unable to stay away from each other, and Fitzpatrick's splendid descriptions of their attraction, are really what make this book. The story itself is intriguing and enrapturing, and the fact that it's about Patch and Nora and their relationship just makes it all that much more impossible to dislike this book.

The dark, scary fog that Fitzpatrick writes over their world is so creepy that the reader will experience a shiver that lasts the whole book.
While I admire Nora for her strength and presence, there was one small thing that annoyed me about this book. It was so hard to know things that she didn't. Sometimes, it seemed like things should just be so evident to her, and it was hard for me to sit back and watch when they weren't.
I can't wait for the sequel! For serious!

Summary (from Amazon.com):For Nora Grey, romance was not part of the plan. She's never been particularly attracted to the boys at her school, no matter how much her best friend, Vee, pushes them at her. Not until Patch came along.

With his easy smile and eyes that seem to see inside her, Nora is drawn to him against her better judgment.

But after a series of terrifying encounters, Nora's not sure who to trust. Patch seems to be everywhere she is, and to know more about her than her closest friends. She can't decide whether she should fall into his arms or run and hide. And when she tries to seek some answers, she finds herself near a truth that is way more unsettling than anything Patch makes her feel.

For Nora is right in the middle of an ancient battle between the immortal and those that have fallen - and, when it comes to choosing sides, the wrong choice will cost her life.

Cover Story: Just look at it in all its awesomeness! Need I say more?

This book was purchased by me.
Posted by brizmus at 12:33 PM
Email ThisBlogThis!Share to TwitterShare to FacebookShare to Pinterest
Labels: 5 stars, YA

Great review girl! I agree w/ everything u said :P

I really liked this too. i will definitely read the next one!

Awesome review, I enjoyed this one as well! :)

Great review! I totally loved it too!!

Yay! I love this book so I'm really glad to hear you enjoyed it. Angels are just the best.

Great review. I'm so glad you loved it.

This one is in my TBR. I've read reviews on both side of the fence for it - people seem to love it or hate it! I'm really looking forward to reading it.

This book was crazy addictive. It has that quality that just pulls you in from the beginning.

I loved this book too. Patch was so fun to read. My biggest problem with it was the 'best friend' Vee. I couldn't believe Nora would have anything to do with her after she blew off the fact that Nora was attacked... and still wanted Nora to go camping with the guy who did it! That seemed ridiculous to me. I would have been fine if Vee died in the end. I know, I'm bad.

Fun book and great review! And the cover - best one of 2009 as far as I'm concerned!

I've read such mixed reviews on this book that I wasn't even interested in trying it, particularly since I haven't been too impressed with most of the YA books that all the other blogs are raving about, but now I think might like to try this one after all.

Nice work there. Thanks for sharing.

I really loved Hush, Hush too! It did seem like at times Nora wasn't seeing the obvious, but I still liked the story. :D

Oh, Audrey, I don't even know where to begin. I just finished this one not long ago, and I couldn't have been more disappointed. I wanted so much to like this, but it was probably one of my biggest disappointments in awhile. I think, when I post my review, I am going to link to you if you don't mind, so that readers can get another point of view.