So, I was supposed to review Veracity by Laura Bynum here in Brizmus Blogs Books today, but unfortunately, I still haven't received it. :-( Everyone else on the tour seems to have received their copy, so I'm hoping mine wasn't lost in the mail or something. I'm very excited about it, though, so be expecting my review soon! It's supposed to be like 1984 or Fahrenheit 451, both of which I ADORED! In the meantime, a little bit about the book: 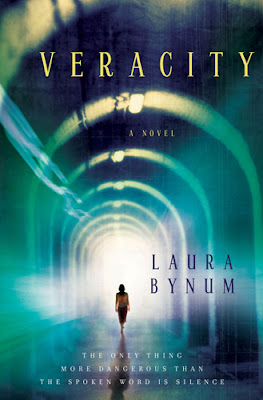 Summary (direct to you from GoodReads): Harper Adams was six years old in 2012 when an act of viral terrorism wiped out one-half of the country's population. Out of the ashes rose a new government, the Confederation of the Willing, dedicated to maintaining order at any cost. The populace is controlled via government-sanctioned sex and drugs, a brutal police force known as the Blue Coats, and a device called the slate, a mandatory implant that monitors every word a person speaks. To utter a Red-Listed, forbidden word is to risk physical punishment or even death.

But there are those who resist. Guided by the fabled "Book of Noah," they are determined to shake the people from their apathy and ignorance, and are prepared to start a war in the name of freedom. The newest member of this resistance is Harper -- a woman driven by memories of a daughter lost, a daughter whose very name was erased by the Red List. And she possesses a power that could make her the underground warriors' ultimate weapon -- or the instrument of their destruction.

In the tradition of Margaret Atwood's The Handmaid's Tale, Laura Bynum has written an astonishing debut novel about a chilling, all-too-plausible future in which speech is a weapon and security comes at the highest price of all. 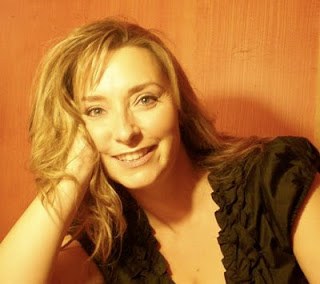 About the Author (from http://laurabynum.com: Laura Bynum was born in Springfield, Illinois in 1968. Childhood plans to be a writer of novels and screenplays and a director of films are currently underway. Laura completed her Bachelor’s and Master’s degrees in Communications at the University of Illinois at Springfield and Eastern Illinois University respectively. She’s since done some filmmaking (Ugly Girl Productions) and marketing consulting. In 2006, Laura won the Rupert Hughes Literary Writing Award at the Maui Writer’s Conference. As a result, she was signed with the Writer’s House. Her Literary Agent is Dan Conaway and her Books to Film Agent is Sylvie Rabineau of Rabineau, Wachter, Sanford & Harris. Laura’s first novel, Veracity, is due out January of 2010. In the summer of 2008, while moving from Illinois to Virginia, Laura was diagnosed with breast cancer and has since been successfully treated.

Laura’s favorite books are both by Steinbeck- East of Eden and The Grapes of Wrath. Her favorite song is Solsbury Hill by Peter Gabriel. Her favorite movie is The Quiet Man. She lives with her husband and three daughters in a small Virginia town in the Shenandoah foothills and is currently writing her second novel and first full-length screenplay.

Check back soon for a review of this book, which is being sent to me by Sarah of Pocket Books!
Posted by brizmus at 11:53 AM
Email ThisBlogThis!Share to TwitterShare to FacebookShare to Pinterest
Labels: late, tour

Can't wait to hear what you think of it! - Parajunkee

I'm wondering what you'll think of it too :)