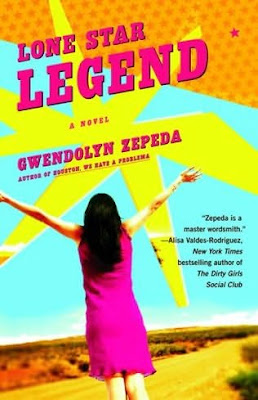 Who Should Read It? People looking for a light, funny, somewhat heartwarming read. I think this will especially appeal to people in the blogging world, since the main character is a blogger. While it is not geared at teens, I can absolutely see fans of YA appreciating this book.

What I Have to Say: This book was fantastic, really. And yet sitting here, trying to write this review, I find myself at a loss of words. It's one of those days, perhaps. I'll do my best.

All of the characters were amazing, well-thought out, likable characters, with the exception of the one you weren't supposed to like, and he was just perfect in his lack of likability. The plot was touching and exciting and lacking nothing. The language and writing style were fluid and catchy.

The book starts off when Domingua Rodriguez, aka Sandy, discovers that the online publication for which she writes has been sold. . .and will become Nacho Papi, which she basically considers trash. Sandy has to decide whether or not to sacrifice her ideals (and morals) to keep her job. Lone Star Legend is the story of Sandy dealing with this huge change in her life (and deal with the fact that her personal blog has now become food for the masses) while at the same time trying to hold onto herself. In essence, this is a coming of age story.

And what we get as Sandy "comes of age" is a delightful, witty, dramatic story that will sometimes have you hoping, sometimes have you cringing, and almost always have you laughing. Zepeda's subtle way of twisting humour with important life lessons is refreshing, uplifting, and best of all, completely realistic. It's not so in your face that you feel like you're being preached at, but there are times when this book will make you sit back and question some of the sacrifices you may have made in your life.

The biggest problem that I had with this book was Sandy's relationship with her boyfriend, which seemed extra contrived. At times, it almost felt as if she had gone back and added him in as an afterthought, just to add drama. While he did occasionally had a hilarious blog entry to the book, for the most part all of the scenes involving him just felt too forced. He didn't fit Sandy, and he didn't fit the book.

My absolute favorite part of this book was the relationship between Sandy and Tio Jaime, aka the Chupacabra, a friend of her late aunt's that she decides to use to do an advice column in Nacho Pap Tio Jaime is so good and pure, and his advice columns, while utterly hilarious, seem to go against the nature of Nacho Papi itself, just as Nacho Papi seems to go against what Tio Jaime stands for. It is only through Tio Jaime, I found, that Sandra can truly see herself, and her weekly visits with him seem to be the only thing keeping her sane as her life is thrown to shambles. To me, these scenes were a setting for everything important in the book, and, luckily, every single one of them was perfect. Each word was cleverly and lovingly picked and place so that the reader will be learning something, living something important while at the same time laughing their pants off.

So, conclusion? Read this book! It's more than just your everyday chicklit. It was really just delightful, and I would absolutely highly recommend it to anyone!

Summary (straight to you from GoodReads): When Sandy Saavedra lands her dream job with the popular website ¡Latino Now!, she can't wait to write hard-hitting pieces to combat all those stupid Latino stereotypes. While visions of Pulitzers dance in her head, her editor in chief is suddenly laid off, replaced by the infamous Dolores Villanueva O'Sullivan. Dolores has one mission: make ¡Latino Now! an internet phenomenon, no matter how many pandering puff pieces she has to pack onto its pages. Sandy doesn't see how she can keep this job without losing her soul, especially when she's sent to Middle-of-Nowhere Texas to investigate the dumbest legend her people ever created, the Chupacabra. She fears she's about to fail an assignment-and lose her job-until she meets Tío Jaime, a grandfatherly hermit who might be crazy, or might be the best thing that ever happened to Sandy's career.

Cover Story: This cover is interesting. It is vibrant and beautiful, but there's something about it that puts me off. I wouldn't see this cover and immediately think that I need to read the book. It also doesn't really seem to fit with the theme of the book for me.

To learn more about the author, be sure to check out her website and to check her out on Twitter.
And, if you're interested, you can always read an excerpt of Lone Star Legend over at the Hachette site!

Disclosure: This book was sent to me by Hachette Books to give an honest review.
Posted by brizmus at 2:19 PM
Email ThisBlogThis!Share to TwitterShare to FacebookShare to Pinterest
Labels: 4 stars, tour

With such a strong recommendation I'll have to give this book a try. I'll add it to my list of books to read when I need a break from SFF.

I really feel like I have a good understanding of what this book is about after reading your review - nice job! I have seen this book around, but hadn't realized that the main character was a blogger.

Interesting, and cool and complete review, as always ! I would've liked to read your cover story, because I feel like the cover doesn't really represent the book ? Or does it ? Meaning that if I had crossed this book in a bookshop, the cover wouldn't have attracted me, but reading your review it really gets my attention.

I've been having that "I-must-read-sad-books" phase, this will cheer me up! Great review!

Oh I simply must read this. I love Hispanic tales :0)

Ooh I can see why you enjoyed it. I'd love to read about a blogger. I guess that says something about my vanity. I can't stand the title or the cover though! thanks for spotlighting this. I have never heard of it!

Great review! The super bright, cheery cover caught me right off the bat, and I'm surprised though glad to hear it was actually a very thought-provoking book. And, lol, romance always = drama. ;)

agh! @Charlotte, I see what you mean now about wanting to read my cover story! Somehow my post reverted back to an earlier version!! I don't know how that happened.
Anyhow, it's changed now - problem solved!

Till I read your review I didnt realize that a character was a blogger. The cover put me off as it was so bright though!

I totally agree with you about the cover, I wouldn't have picked up this in a bookstore on that basis, but luckily I've read your review first, and it sounds right up my alley - will have to check it out!

The cover didn't appeal to me either - it's too neon-y bright. But the review and summary are much more promising. I especially like the part about hilarious blog entries - those would make me want to pick the book up.

I feel I need to read something light and easy so I may just give this a try.

Sometimes one just wants a fun in the sun read !

Wow. I hadn't thought this book would be good until I started reading all the great reviews like yours.

I, too, hate it when relationships in books seem contrived. It can get a little distracting.

I remember seeing a teaser tuesday for this novel a while back, and your review is making me look forward to this novel even more than I already am. =D

This book sounds really good! Thanks for the review! :)

Great review. Pulls you into story and you are pulling for Sandy to master her boss.. I would really like to read.
Thanks again for review.

Sounds great, it has a interesting plot and a pretty cover. Nice Review!

I thought it was a great review. I like the idea that it's more than chick lit, but still light.

Four Star! Sounds funny and interesting, and the cover is pretty too. I'd like to read it

This sounds like a well written but fun book I would enjoy. Especially with the irresistible attractions of a blogger and the Chupacabra!

Thank you for the recommendation.

And I agree about the cover - there is something about the colour mix which just isn't right for this book.