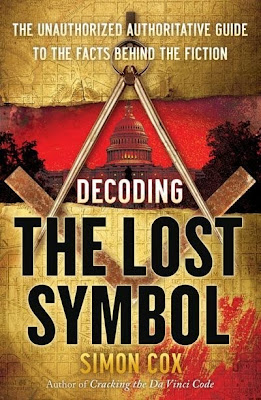 Title: Decoding the Lost Symbol: The Unauthorized Authoritative Guide to the Facts Behind the Fiction

What I Have to Say: I am an absolute fanatic when it comes to "mysteries" and Freemasons and alchemy and that sort of thing. One of the greatest classes I took in college was called "Alchemy and Transformation of Self." So, when reading the Lost Symbol, I wanted more facts, was literally thirsting for more facts. I knew a little bit about most of the things Dan Brown was talking about in his extensively researched novel, but I just needed more.

Simon Cox has given us that. In his well-organized Lost Symbol reference guide, you will find, in alphabetical order (of course!), brief descriptions of every possible thing one might have wondered about while reading the Lost Symbol. And he gives you just enough to satisfy your curiosity. As such, it doesn't get boring if you're reading a subject that's not particularly interesting, but you still get a good fill of all of the things that you find fascinating.

Still, I was so curious about some of the things he said that I'll definitely be doing a bit more research. I had never heard before, for example, that some people believe that Shakespeare didn't actually write any of his works. And that some people believe that maybe Sir Francis Bacon (whom I've always adored) did write them. I'll definitely be looking more into this.

All in all, even though it's a reference guide, it's extraordinarily easy and fascinating to read. Simon Cox has done a great job of separating Lost Symbol fact from Lost Symbol fiction while at the same time presenting the reader with enough knowledge to feel, well, knowledgeable.

Summary: Dan Brown's new novel once again features Harvard symbologist Robert Langdon, this time in the United States, racing to uncover clues and crack codes involving secrets that are perpetuated to this day. But how much of the novel is true and what is pure fiction? Simon Cox, bestselling author of Cracking the Da Vinci Code and Illuminating Angels & Demons, offers the first definitive guide to all the mysteries featured in The Lost Symbol.

Based on extensive research, this A-to-Z guide lists the real people, organizations, and themes featured in Dan Brown's latest novel, explains their histories and their meanings, reproduces and analyzes the symbols themselves, and provides insider knowledge gleaned from years of exhaustive study. From the monuments of Washington, D.C., to the secrets of Salt Lake City and the hidden enclaves in Langley, Virginia, Cox knows where the facts are hidden about the Freemasons, Albert Pike, the Rosicrucians, the Founding Fathers, and more.

This is the only resource you'll need to understand and enjoy the complex new world of The Lost Symbol.

Cover Story: While I'm not a HUGE fan of this over, I think it complements nicely the cover of the Lost Symbol, which I also, unfortunately, didn't really like at all.

Disclosure: This book was sent to me by FSB Media to give an honest review.
Posted by brizmus at 7:46 AM
Email ThisBlogThis!Share to TwitterShare to FacebookShare to Pinterest
Labels: 4 stars, non-fiction

Fab review. Sounds very interesting. I have never heard that bit about Shakes.

This has no appeal to me if I'm honest but I think hubby might find it interesting :-)

I am really interested in this one! I love conspiracies, etc.!

I have an award for you:

And I thought that I was the only one who did not like The Lost Symbol.

After reading your review and the comments here, I don't really want to read this book. I like suspense, intrigue, mystery but this just doesn't sound like my kinda of book..LOL
Thanks for the honest review.