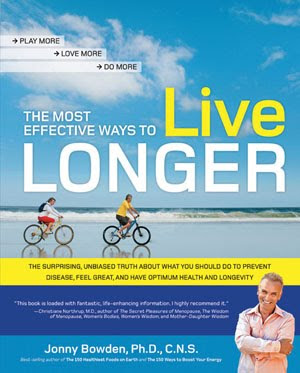 Title: The Most Effective Ways to Live Longer: the Surprising, Unbiased Truth About What You Should Do to Prevent Diseas, Feel Great, and Have Optimum Health and Longevity

Who Should Read It? Anyone interested in the way the body works and in living the healthiest, most disease free life possible. Anyone wanting to feel young for all of their life. Really, the extension of the title says it all. Really, though, I think EVERYONE should read it.


What I Have to Say:
Incredibly, amazingly, wonderfully useful. That's what I have to say about this book.
Now, I'm wondering what it says about my age that I was able to read this book from cover to back in three days, in the same way I normally devour a fiction novel.
I guess that probably says more about the books readability, though, than about me being an old 27 year old. It had so many interesting facts and so many great ideas about how to use those facts to live a healthier longer life that one might think it would be easy to occasionally get bogged down by facts. This didn't happen. Everything was presented in such a way that even the layman would easily get maximum benefit.
The book was separated into sections that will make it easy to go back and re-look up something I might later forget or be wondering about. The beautiful, glossy color pictures were a great addition to the words that made it easy to visualize everything he was saying. Bowden's "Four Horsemen of Aging:" free radicals, inflammation, glycation, and stress, are a humorous and realistic way of looking at the things that actually cause disease and then figuring out what we can do about them.
I highly recommend this book to anyone and everyone. I think it is VITAL that people not only know how to lead healthy lifestyles but also understand the benefits and therefore have the motivation to do so. A book like this provides the motivation and the know how. It occasionally made me laugh, which in no way took away from the seriousness of the message. The power and beauty of the chapter on emotional intelligence is something I think will stay with me for life. The power of friends and community is, indeed, amazing!
That's not to say everything was perfect with the book, though, and there were actually a few things with which I had trouble.
And thus, my little rant, which you can choose to read or not: Okay, Dr. Bowden, I get it. You like wild salmon. No, you love wild salmon. Especially from Vital Nutrients. We can find this Vital Nutrients salmon via your website, and you recommend that, to live healthily, we eat A LOT of it! He might have overstressed this point just a little bit. I almost wish I had counted the number of times he mentioned it.
It might have been less annoying for me if he had also mentioned vegan alternatives to the omega-3s and health benefits of salmon, but every time he mentioned flax, it was in parentheses, as an afterthought.
Because the fact is, SO MANY STUDIES have shown that a vegan diet with B12 (because, studies say, the supplement is actually better for you than the meat from which you can get it naturally) is pretty much the healthiest diet there is. I understand that he doesn't believe this, and that's fine. The thing is, he has so many arguments that make is seem like a salmon-eating vegan would be the healthiest way to go that it seems odd of him to disregard veganism entirely. It would have been awesome if he had given vegan alternatives (which I know exist, and to which he occasionally alluded) that give the same nutrients as the things he was suggesting.
He also goes a little overboard on the supplement advice. It seems like I would be taking about a thousand pills a day. In "The China Study," I read that there are several studies that have shown that taking supplements of certain vitamins and minerals can often have the opposite effect of what we are hoping. In this book, I've now read the opposite. Does this mean studies are showing these two contradictory things, and if so, what am I supposed to believe? In any case, it seems logical to me that getting my vitamins and minerals from natural, food sources is the most effective way to go. I therefore think that a great addition to this book would have been this: each time he suggested a supplement, he could have also given a short list of foods that would also give the desired nutrients.
I'm also not entirely sure how I felt about the section on hormones. But this has nothing to do with what he was saying or his way of saying it; it has more to do certain beliefs of my own about living a more natural life. So I've decided not to go there.
Note: he does address some of these things in the conclusion, but it almost seemed a bit like 'too little, too late' for me.

Okay, rant over. What makes these things okay, I suppose, is that he was very clear about what was his OPINION and what came from studies and could be considered fact. In the end, like I said, despite my occasional negative thought about it (and the fact that my rant is longer than the actual review), I actually loved this book. I'm looking forward to reading some of Jonny Bowden's earlier books that he talked about in this one. They sound like they will be just as interesting and informative. And on that note, I'm off to exercise using some of the awesome methods he gives in his book. He makes exercising seem so doable! And while he in no way made me think I should stop being a vegan, he did make me think that I've got to find a way to start loving blueberries!

Summary:Author Jonny Bowden looks at what he calls “The Four Horsemen of Aging”—free radicals, inflammation, glycation, and stress—and shows how they can harm your health and shorten your life. Bowden then unveils an arsenal of anti-aging strategies culled from cutting edge research and lessons learned from the longest lived people on the planet. He examines how the major organs, such as the heart and the brain, age and how you can prevent damage to these vital parts of the body. In total, readers learn what they can eat, do, and take to feel great, avoid illness, and live a long life. 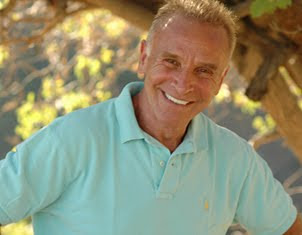 If you are thinking about reading this book but would like to know a little bit more about Jonny Bowden beforehand, be sure to check out his website, http://www.jonnybowden.com/. It's full of fun facts and information about how to lead a healthy life!

Disclosure: Thanks to Dorothy at Pump Up Your Book for providing me this book to give an honest review. If you click on my Amazon link and buy something, I will make a small profit.
Posted by brizmus at 8:23 AM
Email ThisBlogThis!Share to TwitterShare to FacebookShare to Pinterest
Labels: 4 1/2 stars, health, self-help

Whoa...what an unusual book to review. I don't go in for this sort of read. You can get so over anxious about what you get etc. I believe in a balanced diet and gentle exercise. So far, it hasn't done me any harm.

I agree that it's confusing to know which studies we should believe when so many of them contradict each other. =]

Hey, you can delete this comment if you want, but please please check your email. I really need your help with something.
<3

Thanks for participating! And, lol, I think I'd rather die unhealthy than eat salmon for the rest of my life. Though great review! Wow, three days? Must've been awesome. :D

Opinion overload...hmm I know he has a right to his beliefs and thats the point of his book...plus to make money. I just dont see myself reading this