Who Should Read It?
People that still like the TV show despite Dexter's newfound anxiety. A good book, I think, for people that love a good but easy mystery, especially if it involves a little bit of gore. As this book does.

What I Have to Say:
I was a little bit disappointed with this book, and it's hard to say why. I watched the first two seasons of Dexter, and I liked them, but by the end of the second season, I was feeling so bored (and so annoyed with all of the characters) that I didn't keep watching for the third season.

What I had liked so much about Dexter was his calm stoicism, his lack of anxiety and stress, his lack of reaction in the face of possible discovery. And slowly, over the course of the first two seasons of the show, that started to change. Until I felt like Dexter was just one big ball of nerves. And that annoyed me. Enough to stop watching.

The book was even worse, when it came to that change. It was a short, somewhat fluffy, easy read, and as such, the change from calm, stoic Dexter to ball of anxiety Dexter seemed to happen immediately. In the first chapter, he was the Dexter I loved. And then, suddenly, he wasn't anymore.

It's hard to say if this would have annoyed me so much if it hadn't already annoyed me in the TV show, but the fact is - it did, and this made reading it very frustrating for me. Honestly, if it hadn't been so short and easy to read, I probably wouldn't have finished it. And that's saying a lot for me, because I finish EVERY book I start. Seriously.

So that's what I have to say. It wasn't actually a bad book. The story was funny and interesting, and if I hadn't had weird expectations and preconceptions from the TV show, I might have actually liked it.

So, if it seems like it might appeal to you, I definitely wouldn't let me change that for you.

Summary:Meet Dexter Morgan, a polite wolf in sheep's clothing. He's handsome and charming, but something in his past has made him abide by a different set of rules. He's a serial killer whose one golden rule makes him immensely likeable: he only kills bad people. And his job as a blood splatter expert for the Miami police department puts him in the perfect position to identify his victims. But when a series of brutal murders bearing a striking similarity to his own style start turning up, Dexter is caught between being flattered and being frightened -- of himself or some other fiend.

Cover Story: Well, it's Dexter. I don't know if I've even seen the other cover. Just a typical TV novel cover; nothing special.
Posted by brizmus at 8:08 AM 3 comments:
Email ThisBlogThis!Share to TwitterShare to FacebookShare to Pinterest
Labels: 3 stars, mystery 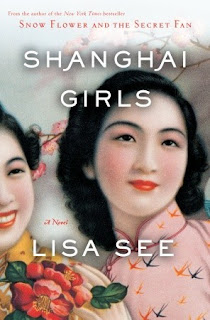 Who Should Read It?
Lisa See is a gifted author, it's just a fact, and Shanghai Girls and Dreams of Joy are no exception. If you've ever been won over by Lisa See in the past, definitely check these books out. If you have any interest in Asian history, these books are for you. 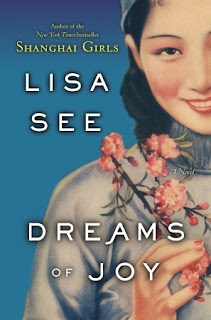 First of all, I went back and forth as to do this as a double review or to review them separately. Dreams of Joy, while being the sequel to Shanghai Girls, is also, fundamentally, a totally different story. Shanghai Girls is the story of sisters. Sisters leading a privileged life, growing up together in China, and then clinging to each other when everything starts to go wrong, in their lives and in China, and they have no one else. Dreams of Joy is the story of a twisted relationship between a "mother" trying to raise her daughter to be a good Chinese girl in America. Shanghai Girls is the story of China, while Dreams of Joy is the story of China in America.
Really, these two books are both so beautifully written and poignantly touching that they deserve their own separate reviews. But after reading Shanghai Girls, I was so enthralled by the story of these two sisters that I immediately picked up Dreams of Joy and just kept reading. I couldn't stop. As such, they're so tangled in my head that they're practically the same book, and I wouldn't even know how to separate them for a review.

So, in order to not give anything from the second away while writing about the first, I will stick to feelings. I cried, I laughed, I was horrified, I was disgusted, I was overwhelmed by beauty, I was annoyed. . .I can't think of any feeling I didn't feel. To summarize - I was moved.

Lisa see has written about the plight of China and of Chinese Americans during (and before) World War II in a vivid, heart-capturing way. Shanghai Girls becomes one of those books that you literally CAN'T put down - the story will be twisting around so much in your head that you'll find you have to pick it back up.

And then, it has no ending. Whatsoever. If I hadn't had Dreams of Joy right on hand, I think I would have been annoyed. But because I did, I was able to smoothly transition into the rest of the story, and I wasn't as disappointed. The story of mother and daughter was just as well-written and beautifully touching as the drama-filled yet loving relationship of two sisters.

I loved these books, and they are totally deserving of the 5 stars I've given them. Only as a pair, though. They need each other. And despite them being so deserving, it was still hard to give them 5 stars, because, as wonderful and as readable as they were, they were still now "Snow Flower and the Secret Fan."

Summary: Shanghai Girls: May and Pearl, two sisters living in Shanghai in the mid-1930s, are beautiful, sophisticated, and well-educated, but their family is on the verge of bankruptcy. Hoping to improve their social standing, May and Pearl’s parents arrange for their daughters to marry “Gold Mountain men” who have come from Los Angeles to find brides.

But when the sisters leave China and arrive at Angel’s Island (the Ellis Island of the West)--where they are detained, interrogated, and humiliated for months--they feel the harsh reality of leaving home. And when May discovers she’s pregnant the situation becomes even more desperate. The sisters make a pact that no one can ever know.

A novel about two sisters, two cultures, and the struggle to find a new life in America while bound to the old, Shanghai Girls is a fresh, fascinating adventure from beloved and bestselling author Lisa See.

Dreams of Joy: In her beloved New York Times bestsellers Snow Flower and the Secret Fan, Peony in Love, and, most recently, Shanghai Girls, Lisa See has brilliantly illuminated the potent bonds of mother love, romantic love, and love of country. Now, in her most powerful novel yet, she returns to these timeless themes, continuing the story of sisters Pearl and May from Shanghai Girls, and Pearl’s strong-willed nineteen-year-old daughter, Joy.

Reeling from newly uncovered family secrets, and anger at her mother and aunt for keeping them from her, Joy runs away to Shanghai in early 1957 to find her birth father—the artist Z.G. Li, with whom both May and Pearl were once in love. Dazzled by him, and blinded by idealism and defiance, Joy throws herself into the New Society of Red China, heedless of the dangers in the communist regime.

Devastated by Joy’s flight and terrified for her safety, Pearl is determined to save her daughter, no matter the personal cost. From the crowded city to remote villages, Pearl confronts old demons and almost insurmountable challenges as she follows Joy, hoping for reconciliation. Yet even as Joy’s and Pearl’s separate journeys converge, one of the most tragic episodes in China’s history threatens their very lives.

Acclaimed for her richly drawn characters and vivid storytelling, Lisa See once again renders a family challenged by tragedy and time, yet ultimately united by the resilience of love.

These books were sent to me for free, but this in no way affected my review.
Posted by brizmus at 6:29 PM 4 comments:
Email ThisBlogThis!Share to TwitterShare to FacebookShare to Pinterest
Labels: 5 stars, china, lisa see
Newer Posts Older Posts Home
Subscribe to: Posts (Atom)