Since, for the time being, I'm living in France, I thought I would try to participate.

A while ago, Lenore at Presenting Lenore posted some German covers of YA books. I thought this was a great idea and wanted to do the same thing for some French book covers. So, I made my way over the fnac and took some pictures, and was all excited about posting them.

And then I never did.

One thing I found interesting was that, well, when it comes to YA, the French are. . .boring when it comes to their YA covers (oops! Don't tell them I said that!). For the most part, they just steal from us Americans. 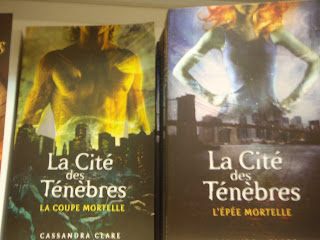 (sorry about the glare; my camera sucks)
Notice how the only thing different about these two Mortal Instruments books is the titles.

Occasionally, they do change the covers. 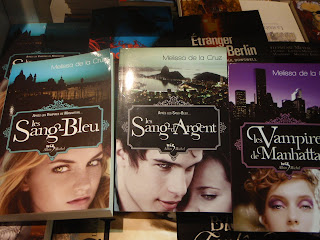 (did I mention my camera sucks?)
But when they do, it's like they've forgotten creativity exists. Maybe it's just me, but I find the original Blue Blood covers infinitely more interesting. I guess maybe, just MAYBE, I could say that I rather like the cover for "the Vampires of Manhattan."

I guess I shouldn't be judging, though - I haven't actually read the books yet. Maybe the French ones fit better what is going on.

That's all for now, folks! I'll try to think of something more interesting for next Friday. :-)
Posted by brizmus at 10:04 AM
Email ThisBlogThis!Share to TwitterShare to FacebookShare to Pinterest
Labels: ff

One thing I've noticed with translations is that the titles seem to be slightly different sometimes.

I *love* seeing the different covers that other countries use for books. Even if they're not that different. I'm vaguely tempted to buy some for my bookshelves to make me look more intelligent.

Yay ! Your first French Friday ! I agree with you on the cover thing. French covers tend to be less attractive than the originals (did you see the one for Graceling by Kristin Cashore ?! I'm going to post about that next week, I was so disappointed...). It's funny, I went to the FNAC yesterday and as always had fun checking the differences in the YA section.

I'm so glad you're participating ! If you're ok with it I'll post a link for your French Fridays in my friday posts ? :)

I didn't know you lived in France too! So cool! And I love that you picked up this meme as well. I have to admit, I really do love American covers for the most part (Garth Nix's Abhorsen Trilogy UK edition is really cool though. I actually bought those international).