I've been having a little bit of trouble getting through the book I am presently reading. Unfortunately, it turned out to be a book of short stories (I should really do at least a LITTLE research on a book before I decide to read it), and since I'm not that into short stories, two books of short stories in a row is a little hard for me. So yesterday I decided to pick up a copy of this book that I had lying around and reread it. I loved it the first time around, and I was pleased to love it again. So here you go. 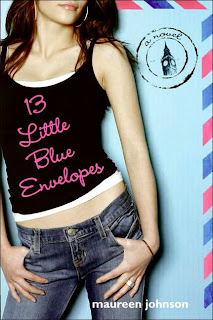 What I Have to Say:This book is an absolute pleasure to read. Ginny is a fun and likable yet shy character. Following her on her quest to self-realization and self-actualization is a whirlwind ride to places you've never been and some places you've been but might not want to remember.
I feel like this book gets a bad rap, and I can understand what the critics are saying, but I still feel like the bad rap is undeserved.
This book is NOT about the final destination but instead about the trip there and the lessons learned along the way. It's true that several times throughout the book, subjects are touched upon and made to seem important only to never been seen again. Just dropped.
Normally, this would annoy me, but in this book, it almost seems necessary. Through Maureen Johnson's writing style, we really understand one of the lessons that Ginny learns - that sometimes in life, things might seem important, but they are not. Sometimes in life, you just have to let things go.
In "13 Little Blue Envelopes," Ginny travels through Europe on a voyage that her favorite dead aunt has prepared for her. She sees some amazing places, meets some very cute boys, and has some ridiculous experiences. The focus, though, is on GINNY herself, and what she learns, not on what she sees in these amazing places. There is very little spotlight on the places that she goes. Some say this is because Maureen Johnson has never been to those places and thus cannot write about them.
While I have no doubt that this is true (is there actually a subway in Rome? I don't remember noticing one. . .), it didn't seem important to me.
The experiences that Ginny has and the lessons that she learns are important - the places that she goes are only important insomuch as they show Ginny learning how to step out of her comfort zone. They are teaching her to break out of her shy shell and to learn to be brave. In a sense, the countries in which she finds herself could be a metaphor for the places and the person that she finds within herself.
In the beginning, Ginny has trouble taking things into her control, instead blindly following instructions. I have read some say that this makes her an annoying and hard to follow or believe character. I think this makes her a teenager. I remember being that way. And in the end, the instructions that she blindly follows teach her how to step back, be brave and take control of things herself, take control of her life.
Maybe Maureen Johnson didn't do it on purpose, but I thought that her lack of clarity on so many things and her fairly regular lack of follow up on certain subjects added to the experiences that Ginny was supposed to be having and helped the reader to really understand what she must have been feeling.
And of course, Maureen Johnson's quirkiness can't help but have the reader laughing and smiling for the entirety of the book.
Conclusion: A well thought out, fun to read book full of deliciousness and fluff and the occasional metaphor and perhaps a slight attempt at depth.

Summary (thank you Good Reads):Inside little blue envelope 1 are $1,000 and instructions to buy a plane ticket.

In envelope 2 are directions to a specific London flat.

The note in envelope 3 tells Ginny: Find a starving artist.

Because of envelope 4, Ginny and a playwright/thief/ bloke–about–town called Keith go to Scotland together, with somewhat disastrous–though utterly romantic–results. But will she ever see him again?

Everything about Ginny will change this summer, and it’s all because of the 13 little blue envelopes.
Posted by brizmus at 6:42 AM
Email ThisBlogThis!Share to TwitterShare to FacebookShare to Pinterest
Labels: 5 stars, YA

Thanks for reviewing this - I read my first Maureen Johnson book last week, *loved* it, and was wondering whether I should check out another... I'm now thinking yes, definitely.

I can't wait to read this one! Awesome review. Very thoughtful and excitement-inducing!

I have this in my TBR pile - I love the whole concept - I'm always drawn to a book about self-actualization.

Great review! I loved this book, and it's my favorite of hers. :)

I JUST picked this one up last night - I am soo excited after reading your review to read it! :) it sounds awesome!