I decided that I wasn't going to post reviews on graphic novels that I read, but since I'm taking a bagazillion years to finish my present book, and since I can't bring myself to read two books at once, I thought I would write this up. 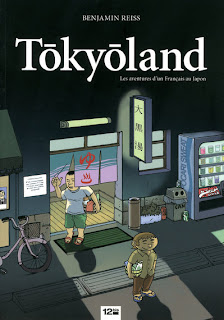 What I Have to Say: This graphic novel had two things and only two things going for it. First, most of it takes place in Japan. And Japan is awesome. Second, aside from our sympathetic narrator, all of the French people are drawn to be hideously ugly with weird, deformed noses. This made me laugh since I find that, in general, that is probably what they look like on the inside. I'm not a huge fan of Parisians.
The story itself was slow and aimless, as if it was going on and going nowhere just for the sake of exisiting. Which, I suppose, is also what life does. But don't we all read to escape that?
There was no beauty in the pointlessness, no beauty in the narrative or the art. The narrator was plain, as was the story he had to tell and the words he used to tell it.

Summary:After years of separation, a Frenchman is called back to Japan, the country where he spent several years of his youth. In this graphic novel, he reminisces to his present day daughter about lost loves and his experiences in Japan.

I've just discovered that this graphic novel has never been published in English. Only French (and perhaps Japanese and other non-English languages?).
Since the review's already written, though, I've decided to post it anyway for those of you out there that can potentially read in French.
Posted by brizmus at 10:14 AM
Email ThisBlogThis!Share to TwitterShare to FacebookShare to Pinterest
Labels: 2 stars, graphic novel

I hate graphic novels that are drawn like that :( They just seem yucky...can never get into them.

And yes Japan is awesome...I went there once...aw, yummy food :D But of course Taiwan is my first love (that's where my fam is from!!)

Oh yeah, here is another clip of Show Luo...there are just random clips of him from his show (lol pun!) called Yu Le Bai Fen Bai (it's a variety show and the eng name is Entertainment 100%) he is soo funny and his sidekick Xiao Gui is there too. Oh and FYI his nickname is Xiao Zhu (Little Pig-cuz he used to be fat)

The song's How Do You Do? By Cascada.

I'm only just getting into graphic novels myself, but I can't imagine reading one that doesn't really have a point to it!