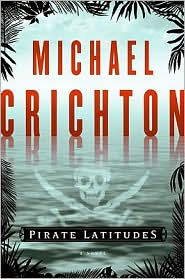 This week's pick is "Pirate Latitudes" by Michael Crichton. I haven't read EVERYTHING that he's written. Just almost everything. And what can I say - I LOVE him. I felt like crying for days and days when he died. :-( I'm just psyched that he left at least one book behind. :-)

Pirate Latitudes by Michael Crichton
Publication Date: November 24, 2009
Publisher: Harper
From the Harper Collins Website: From one of the best-loved authors of all time comes an irresistible adventure of swashbuckling pirates in the New World, a classic story of treasure and betrayal.

The Caribbean, 1665. A remote colony of the English Crown, the island of Jamaica holds out against the vast supremacy of the Spanish empire. Port Royal, its capital, is a cutthroat town of taverns, grog shops, and bawdy houses.

In this steamy climate there's a living to be made, a living that can end swiftly by disease—or by dagger. For Captain Charles Hunter, gold in Spanish hands is gold for the taking, and the law of the land rests with those ruthless enough to make it.

Word in port is that the galleon El Trinidad, fresh from New Spain, is awaiting repairs in a nearby harbor. Heavily fortified, the impregnable harbor is guarded by the bloodthirsty Cazalla, a favorite commander of the Spanish king himself. With backing from a powerful ally, Hunter assembles a crew of ruffians to infiltrate the enemy outpost and commandeer El Trinidad, along with its fortune in Spanish gold. The raid is as perilous as the bloodiest tales of island legend, and Hunter will lose more than one man before he even sets foot on foreign shores, where dense jungle and the firepower of Spanish infantry stand between him and the treasure. . . .

I actually haven't read it yet, as I want to know NOTHING about the book when I start reading it. YAY! I am so excited!
Posted by brizmus at 7:19 AM
Email ThisBlogThis!Share to TwitterShare to FacebookShare to Pinterest
Labels: WoW

Great pick! award (edited, i forgot to put you!) http://the-bookologist.blogspot.com/2009/10/awards.html

lol, I had this as a WOW pick earlier too...and just like you I have no desire to read what it's about! I'm assuming pirates and that's it :)

Waiting on this at my house too!

Sounds like a great wow pick! I've never read anything by the author but now I think I'll have to :)

I can't wait for this - Michael Crichton and pirates - it has to be good.

This was one of my WoW picks. I can't wait to read this book. Have a great day :)

I like Michael Crichton, too - haven't read everything he's written, but every time I pick up one of his books, I'm always amazed by how easily and quickly he draws me into the story.