Review: Odd and the Frost Giants by Neil Gaiman 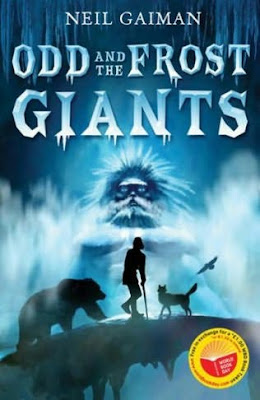 Title: Odd and the Frost Giants

Recommended: Absolutely; and because it's such a quick read (I think I read it in half an hour), I think I would recommend it to ANYONE. While I don't see how someone couldn't enjoy it, at least if you don't you won't have really wasted your time.

What I Have to Say: This short story for children is basically everything I love about Neil Gaiman broken down into a quick 90 pages. The writing is fun and fluid with a knack for description that leaves just enough up to the imagination. The way he weaves the Norse Gods into his story is fun, exciting, and realistic. It gives just a little taste of what the Norse Gods are like, thus invoking curiosity about them in any reader (and what a better way to learn more about them than to go read Neil Gaimain's other books - American Gods, to be specific!) - which I think is exactly what is needed in a children's book. Any book that makes kids curious and inspires them to learn gets an A+ in my book.
In general, I find that Gaiman does adult novels and comics better than he does children's books. At least, I used to feel that way until the awesomeness of the Graveyard Book. This book aims at a younger audience than that of the graveyard book and still manages to be fantastic for an adult audience.
With Odd and the Frost Giants, Neil Gaiman shows that he is, indeed, able to take the awesomeness of his ideas and make them accessible to children. And yet, through it all, he throws in the occasional reference that children may not understand (and don't need to understand to appreciate the book) but that leave the adult riveted through the entire epic journey.
All in all, this book ends up being the perfect read for a mother or father to read to their child. Or for a child just getting into books. Or for an adult with a quick half hour in the waiting room.
It was just wonderful.
I don't think any more needs to be said. :-)

Summary:After the death of his father, Odd's life has been stuck in a downward spiral. However, his luck begins to change after he frees a trapped bear in the woods. Discovering that the bear is actually a Norse god, twelve-year-old Odd embarks on a perilous quest to save the other gods from evil frost giants.
Posted by brizmus at 11:15 AM
Email ThisBlogThis!Share to TwitterShare to FacebookShare to Pinterest
Labels: 5 stars

I read this a while ago. I really enjoyed it too. Such a quick but brilliant read. Great review.

I have not yet read a book by this author but I have been hearing great things of him.

I am always looking for a great book to share with my son and this seems just right. And being only 90 pages makes it easier for us to get through it together. I think I will put this on a list to do with him.

Thanks for the great review!

I wanted to leave you a note to let you know I have an award for you. http://melissa-melsworld.blogspot.com/

Oh sounds cool, I do love Gaiman, he is so fun