My First Awards and an Interview Chez The Bookologist!

I don't know how, but I totally forgot to mention this before. On Tuesday,

interviewed me as a new blogger in something she's doing called Tuesday's Chatter. You should go check it out!
Not just the interview, but also her blog. :-)
She has some great reviews, giveaways, and interviews happening!

Other than that, I was just awarded MY VERY FIRST AWARD from Gofita's Page!

I'm just getting to know some of the other blogs out there, so this is going to be hard for me, but I'll do my best!

Now for 10 honest things about me:
1.I sleep with a stuffed dog named Eva.
2.I hate Paris, France.
3.I much prefer baths to showers.
4.I HATE CIGARETTES (and think they should be illegal).
5.In my life, I have turned tons of people on to reading and somehow managed to convert most of them to veganism. YAY! :-)
6.I am a vegan, and it is very important to me.
7.I get sad if I go a day without chocolate.
8.I can count to 10 in at least 10 languages.
9.I have always wanted a collection but could never stay obesessed long enough with anything other than books (or stuffed animals, I guess) to be able to form one.
10.I am ridiculously life-changingly afraid of death (I sort of stole this one from Gofita).

Okay, hopefully that was slightly interesting.

Gofita's Pages also passed along to me the Super Commenter Award, which I am particularly excited about! 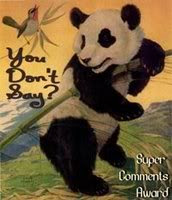 I love comments!!!! And I love commenting.
I would like to pass this award along to
Spiggy, who unfortunately does not have a blog but has been following mine from the beginning. Without her support, I really think I would have given up a while ago. :-)
Also, I think everyone who has ever commented in my blog is deserving of this award. So thanks everyone!

Up later today:Review of Maureen Johnson's "13 Little Blue Envelopes"
Posted by brizmus at 5:59 AM
Email ThisBlogThis!Share to TwitterShare to FacebookShare to Pinterest
Labels: award, interview

Ditto to nine. I've considered child-bearing merely so I can amass a collection of My Little Ponies, but it wouldn't seem right somehow.

Thanks so much for the award, and congrats for yours

Thank you so much for thinking of me! And congrats on getting the award yourself :)

I have learned to say "Today, like always, I think of you" in ten languages!!

This is wonderful and so thoughtful. Thank you thank you! :)

You hate Paris? Wow. That's kinda cool because I've never heard anyone say that. Might I ask why?

Thank you so much for the award! I can't wait to pick people to pass it on to!

Aw thanks so much for the award :)

And I sleep my with stuffed dog too! She's a dalmation :D

Thanks for sending me this link, Audrey! I loved reading your random things. I just mentioned French Milk to you, and now that I've read your list, what struck me about French Milk was how smoking was so common there in Paris! Around here (Toronto, Canada) you can only smoke outside in the great outdoors, or in your own home. :)