So, it's Sunday, which I guess technically means that Banned Books Week is over. And, for some reason that I can't really fathom, I didn't blog about it once.
This does not mean that I do not care. 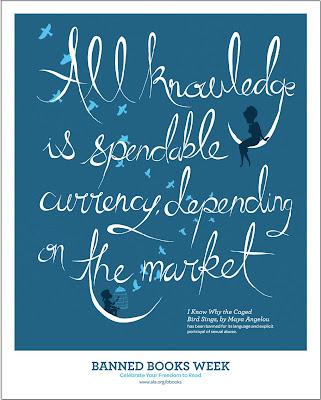 Frankly, the banning of books is just one of those things that turns me off so much I don't really want to even think about it. Which I suppose is that unfathomable reason for which I didn't blog about it. I'd like to believe that the banning of books is just something that doesn't happen, especially in the United States of America, where freedom of speech (which, when it boils down to it, also means freedom to read and write whatever we please) is one of the key elements of the constitution. The unfortunate fact of it is, though, BANNING OF BOOKS HAPPENS! And, as readers, we have to protect our freedom to read. In order to do that, though, we have to know what's going on.

I am ashamed to admit that, probably because my lack of desire to think about book banning, I really knew little about it. So when trying to figure out what this whole banned books week thing was all about, I was SHOCKED to discover that some of the most amazing, life changing books have been challenged and banned. Not only that, but that IT'S STILL HAPPENING!!!! A LOT!!!! And not just by Sarah Palin. And I couldn't help but think ot myself "WHAT IS WRONG WITH PEOPLE?!?" Sometimes I can't help but lost faith in humanity (side note: this is also how I felt last night after seeing District 9). Books I loved like "the Kite Runner" and "Gossip Girl" and "His Dark Materials" and "I Know Why the Caged Bird Sings" and "Bridge to Terabithia" and seriously, I repeat again, WHAT IS WRONG WITH PEOPLE?!? Some of the reasons why these books are challenged are just ridiculous!

Which has of course inspired me to try to get out there and read as many of these banned books as possible.
More than that, though, it made me understand the importance of having something like a Banned Books Week, to celebrate our first amendmant right to read what we like and to write what we like and to say what we like. It is something I for one take for granted on a regular basis, and Banned Books Week helps remind people that unless we speak up, it's a right that might be taken away. That is, on a regular basis, challenged.

So speak up, people, and do everything you can to make sure that this right remains ours and that those who challenge it fail. Don't just celebrate your right to read once a year, for a week; celebrate it everyday. And if you hear of books being banned or challenged, no matter where it is, doing something about it. Even if that means just sending an e-mail to remind them of our first amendmant right. Let people know on a regular basis how important it is to you.

And here's hoping that this post made sense. I'm feeling a little bit passionate (and passionately annoyed) right now, so I sort of feel all over the place. If not, check out this really cool article for something a little more coherent.

In the meantime: Do you have a favorite book that has been banned or challenged? I would love to hear about it!

I mentioned some favorites above, but "Bridge to Terabithia" and "Fahrenheit 451" are two banned/challenged books that have influenced my life in amazing ways!
Posted by brizmus at 12:12 PM
Email ThisBlogThis!Share to TwitterShare to FacebookShare to Pinterest
Labels: Banned Books Week

I totally hear you on the Banned Book week... I didnt know a lot about it either and looking at the list I was shocked. I mean, all the Judy Blume books I grew up with? Are you kidding me?

I apparently was a rebel from an early age...LOL

I applaude you for your passion on this! There are just some folks that want to get attention or gain control other people. It's in all of our interests to keep that from happening.

Banning books is just so wrong for so many reasons.
It comes down to trying to prevent people thinking for themselves.