Okay, so I've decided to try to add a new feature to my blog.
You see, music is very important to me, playing as much a role in my life as books. So I thought - why not feature a band I love every Sunday. A band might get featured twice if they have a new song out that I think absolutely HAS to be heard.

So that's it, Sunday's Rock Stars is a feature in which I talk a little bit about a band I love.
(I am SURE that this is also done in other blogs, but I have never actually SEEN it being done, so I can't give credit to anyone. Sorry!)

The band I will be featuring this week is one of my absolute FAVORITE bands of all time, THE UNLOVABLES!!!! Don't let their name fool you, because they are absolutely loveable. 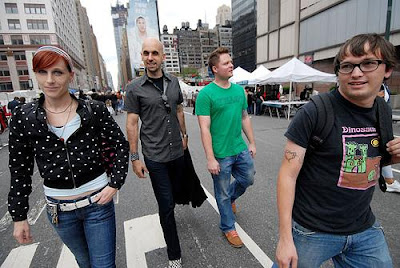 The Unlovables are a New York City based pop-punk band with two full-length releases on Whoa Oh! Records (which is also NYC based). They are comprised of Hallie Bullit, Unlovable Frank, Mikey Erg (who is also front-man of another AMAZING Whoa Oh! Records based band, the Ergs!), and Mat, all of whom are basically the coolest punk rockers in the business (that's just my opinion, though).

Both of their albums, "Crush, Boyfriend, Heartache," and "Hearsickle" are a miraculous blend of bubblegummy harmonies, gritty punk, and catchy pop hooks that will knock your socks right off. Listening to the Unlovables is like living through an eternal sugar high. Like eating cotton candy while riding the Tilt-A-Whirl at the fair. Frankly, it doesn't get any better than this. Every song is so catchy it will have you singing along within minutes. 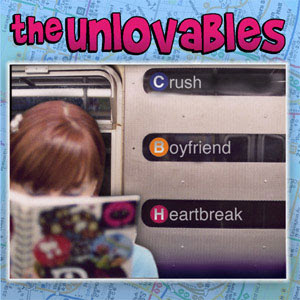 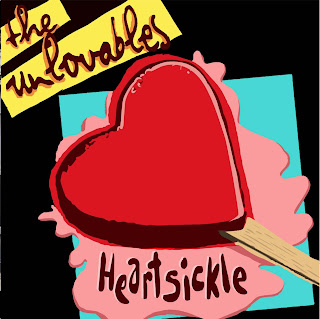 As Billboard.com said, "The Unlovables are now pretty much the gold standard of pop-punk."
What can I say? It's just a fact.

Okay, you listened to the song now, right? And now that you've heard them live with bad sound quality, you want to hear them recorded in a nice studio, right? So get on it! Go check out their myspace page!!!!
I <3 the Unlovables!
Posted by brizmus at 10:49 AM
Email ThisBlogThis!Share to TwitterShare to FacebookShare to Pinterest
Labels: Sunday's Stars

A little too pop-y for me, but they're cute. If that makes sense. Thanks for sharing! :)