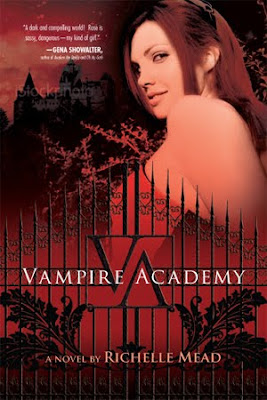 Recommended? To all YA Vampire lovers out there; this book is great!

What I Have to Say: This was super cute, fast-paced read with likable main characters and a fantastic, addictive plotline. Add in the fact that it's all about vampires, and we've got ourselves a winner of a book.
Richelle Mead's vision of a world in which vampires exist in the underground, unknown to MOST humans (except the feeders - um, ick!), is vivid and unique, something different from the typical vampire world most YA readers have been getting used to recently.
The Moroi are the living vampires, who are protected by the half-human half-vampire Dhampirs from the Strigoi, the dead vampires. In the beginning, it was a little bit difficult to keep all of this straight, but as the story continued, her world became as natural and real as the world I am living in today.
Honestly, I was amazed and awed with the way in which Mead populated a world full of the good guy vampires we have come to love, but without letting go of the evil undead blood-sucking vampire image.

Moroi = good but weak. Strigoi = bad and vicious. Dhampir = good and loyal.
And loyal the Dhampir are. Rose, a Dhampir and our narrator, is so loyal to her protege, Lissa, princess of a dying Moroi line, that it could almost be considered a fault. Rose's relationship with Lissa, while being paranormal, is also something all teenagers can relate to, either because they have a best friend or they dream of having a best friend as loyal as Rose. I know that I personally have sacrificed much for friends. I can be loyal to a fault, and so, while I think it's extreme how Rose would sacrifice EVERYTHING for Lissa, how her entire life is about protecting her, I can also understand.

Mead brings this loyalty to a whole new level, though. Because it's not just about two people, about Lissa and Rose. It's also about two races of people (vampire?). The relationship between the Moroi and the Dhampir, in general, is horrifying in that an entire race is willing to sacrifice their lives and happiness for another, weaker race. And yet, because Mead has written the story from Rose's point of view, it also seems completely natural. Like the only way things could possibly be.

And that was one of the greatest things about this book. It was written from Rose's point of view; Rose the protector, Rose the bodyguard. The character who rarely has a voice was allowed to express herself loud and clear.
This book was dark yet fun; easy to read yet with a whole slew of deeper meaning.
This book had me neglecting everyone and everything in my life while I was reading it, unable to stop turning the pages, unable to put it down for even a second.
In other words, I liked it. :-)

SummarySt. Vladimir’s Academy isn’t just any boarding school—it’s a hidden place where vampires are educated in the ways of magic and half-human teens train to protect them. Rose Hathaway is a Dhampir, a bodyguard for her best friend Lissa, a Moroi Vampire Princess. They’ve been on the run, but now they’re being dragged back to St. Vladimir’s—the very place where they’re most in danger. . . .

Rose and Lissa become enmeshed in forbidden romance, the Academy’s ruthless social scene, and unspeakable nighttime rituals. But they must be careful lest the Strigoi—the world’s fiercest and most dangerous vampires—make Lissa one of them forever.

Final Question:To whom in your life are the most loyal? Are you more loyal to your family or your friends? How do you feel about loyalty in general? What does it mean to you?
Posted by brizmus at 9:33 AM
Email ThisBlogThis!Share to TwitterShare to FacebookShare to Pinterest
Labels: 4 stars, vampire

This really sounds good! I checked it on Amazon to see if it's available on Kindle. And this is just the first book in like a 5 part series. I'm going to give it a try!

Hello Brizmus – I’m a British author and a fellow member of Bookblogs, and I wanted to invite you (and your readers) to participate in my Blogsplash – there’s more information at http://www.fionarobyn.com/thawblogsplash.htm. Thanks for listening!

I have been curious about this series. I really like your review, you have helped explain this book better than I have seen yet. Thanks for the great review on the book and helping to clarify the book some for me.

This seems to be a really poular read - everywhere I look someone has a copy of it clutched in their hands. I dont like the cover though. Is she supposed to be a vampire? Just isn't how I picture a vampire looking somehow.

I love this book and this whole series! It's one of the best out there and my favorite vampire book by far. I like what you said about it being from Rose's perspective and not Lissa's too. I realize at first I didn't feel like reading it because Lissa would be the natural POV character and is in a lot of books, but Rose is awesome and I'm so glad Richelle Mead used her as the narrator.

Great review! VA rocks. It definitely is huge on loyalty, and I still can't wait to see what happens in Blood Promise!

ooh i need to read this! Great review

I've never really considered this series, because I'm not a big fan of vampire books, but since I've been reading so manu good reviews of it, maybe I should try it. Is it as goos as Evernight by Claudia Gray? I loved that. So much better than Twilight.