This is where we write about French bookish things. Don't hesitate to go check out Charlotte's. Hers is always way cooler than mine.

Anyhow, this week I wanted to talk about something I noticed last week when I was scouring the French book stores for Halloween books. And didn't find any.
You see, the thing is, I am totally obsessed with Japan. And it would appear that the French are as well. I always give the French, especially Parisians, a hard time. But in this I am going to have to say, go the French!!!! For while there were no Halloween books in sight in the children's section, there were about a bagazillion Japanese books. Many of them that don't even seem to have been translated into English.

The first one I noticed was Tokyo Sanpo, which is Japanese for a walk around Tokyo (look at me putting my Japanese lessons to use!). 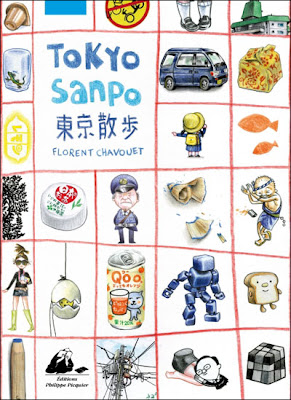 It is the most adorable book that you follow on a walk around Tokyo. There are just the cutest images of all of the things that you would see. 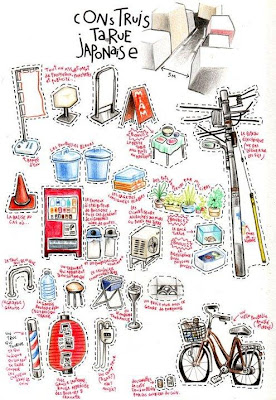 And it's full of activities, such as the one above!
Construis ta rue japonaise = Create your own Japanese street.
And it gives you all the pictures necessary to do just that.
It was written by French author/illustrator, Florent Chavouet, who evidentally spent 6 months in Japan. This is her picture journey through those 6 months. And frankly, it's one of the cutest books I've ever seen. I'm thinking I have to pick myself up a copy.

Other than that, there were also these two adorable pictures books by Annelore Parot. 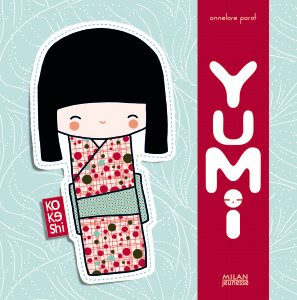 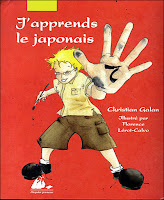 And not to be forgotten is J'apprends le japonais! (I'm learning Japanese!) This book is HANDS DOWN the most efficient book I have ever seen for learning beginning Japanese. Not only that, it's cute and fun and funny and everything anyone needs to motivate themselves to study on their own.

So let me just say something I don't say often: GO FRENCH PEOPLE FOR DOING SOMETHING RIGHT FOR ONCE!

I guess my French Friday this week could have also been French and Japanese Friday. I hope you enjoyed it nonetheless. :-) And don't forget to go check out Charlotte's contribution!
Posted by brizmus at 5:23 PM
Email ThisBlogThis!Share to TwitterShare to FacebookShare to Pinterest
Labels: ff, Japan

Those are so cute! (I am in love with Japan as well). I really hope that second one is available in the US. And really, that smiling toast with legs is so Japanese. :)