So once again my French Friday post is happening on Saturday. Oops! So much for the Friday part.

This week, I've decided to post about some books that I absolutely LOVE that I read in French, because they came out here in France before coming out in the good ole USofA.
What books are these, you ask? Well, that would be the Millenium Trilogy by Stieg Larsson. I'm pretty sure they're not called the Millenium Trilogy in English, though. Does anyone know if there is an English name for this trilogy? 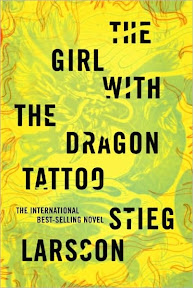 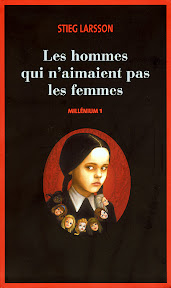 Unfortunately, I read this book before I started my blog. So no review. I will tell you, though, that I would have given it the full

! It was amazingly fantastic!
As for the covers, this is the only one of the three for which I actually prefer the American cover. Still, I am partial to the French cover as it is what attracted me to these amazing books to begin with. For the titles, while the Girl with the Dragon Tattoo is catchy, I find the French title to be just a little bit more catchy. And it seems more suited to the book to me. 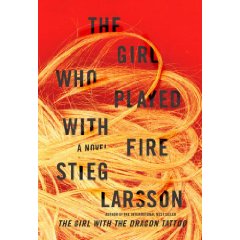 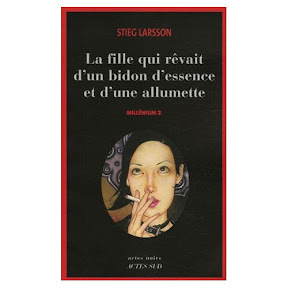 English Title: The Girl Who Played With Fire
French Title: La Fille Qui Revait d'un bidon d'essence et une allumette
Translation: The Girl who Dreamed of a tank of gas and a match

My review of this fantastic second book in the trilogy can be found here.
I hate anything to do with cigarettes, but isn't that French cover just so dark and gothic and amazing? These two titles are actually similar, but, like with the first one, I find that there is something in the French title that just suits the book a little bit better.
N.B. This book made #7 on Amazon's Editor's Picks for the Top 100 Books of 2009. Yes, it's that amazing! 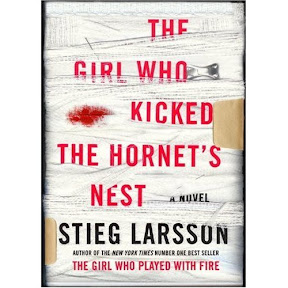 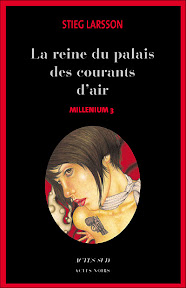 My review of this amazing book can be found here.
Okay, so in French the title sounds beautiful, but I'll admit that, when translated to English, there are some things lost in translation.
Once again, the dark, gothic-style French cover just seems far more suited to the book to me. I LOVE it!
N.B. This book will be released in the United States on May 25, 2010. Keep your eyes open for it!

These are some of the only books for which I actually like the French covers and titles better than the American covers and titles. Let me know what you think! And if you've read them, I'd love to hear your thoughts.

That's all for now, folks!
Posted by brizmus at 5:56 AM
Email ThisBlogThis!Share to TwitterShare to FacebookShare to Pinterest
Labels: ff, millenium

The girl on the French cover of The Girl with the dragon tattoo looks like Christina Ricci as Wednesday Adams. I called my sis last week to tell her she has to lend me her copies of this series.
Love this feature!

Those title translations are kind of amusing. I wonder how they decide whether to translate or just make up something different altogether...

To respond to Susisunshine, it is Wednesday from the Adams Family. On the information page (edition, printed where, blablabla...) they say that the illustration represents her.

Like SusiSunshine, I was thinking that the girl on the cover of Les Hommes Qui n'aimaient Pas Les Femmes looks *exactly* like Wednesday Adams. I haven't read the book though, so I have no idea whether it's intentional?

It's interesting seeing the different covers. If you haven't seen the UK covers yet you should check them out.

Oh and re: your comment on my blog - I am in the UK. London girl through and through!

I've heard these are good...I agree with Susi that the girl looks like Christina Ricci from the Addams Family!

I read The Girl With The Dragon Tattoo, but didn't like it at all... it totally creeped me out. So I'm not daring to come near the second of the third book, lol. The title of the thrid book in Italian is similar to the French one, "The queen of paper castles", which I think sounds a lot prettier than kicking hornet's nests, lol.

Haven't read these but heard they were wonderful. I love seeing the covers from different countries. This is a fun post. Thanks!

I haven't read any of them, but the French covers are very intriguing. I am going to check them out on Amazon and who knows they might wind up on my TBR list.