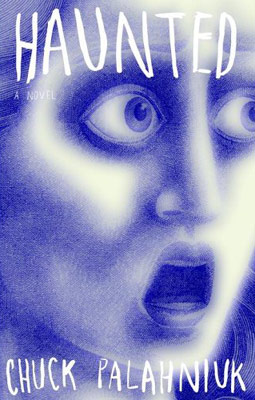 Who Should Read It? This book is for those that are NOT weak of stomach and that are ready to see the horrific, disturbing side of humanity.

What I Have To Say: In Haunted, Chuck Palahniuk has brought together the most horrifically horrifying and horrifyingly repulsive cast of characters imaginable. They are all attending a three month writer's retreat, a basis to bring all these crazies together, that has gone awry. He takes these characters and uses them to cross every social boundary in existence. He has created a collection of stories that could only be created by Chuck Palahniuk himself; no other author would dare.
Haunted is, hands down, the most hauntingly disturbing book of short stories I have ever in my life read. Really, short stories aside, it's the most disturbing book I have ever read. I would say that each story is more extreme than the next, except that this wouldn't be true - he starts with a bang, throwing it all out there in his very first story, the most cringe-worthy of them all. There were seriously points during this story in which I had to stop reading for a moment, for fear that I might throw up. I think if I had kept reading, I actually would have thrown up.
After this first story, which evidentally regularly made people faint during readings, we go on to hear stories told by each and every one of the screwed up participants in the writer's retreat. They are all freakishly fascinating in their own unique way. They're each way beyond the boundaries of believable and yet, somewhere in the back of your mind, you can't help be wonder if it's based on some psycho reality. He then ends it all with a science-fiction, Martian Chronicles esque story that I found to be the most horrifying of all. It was the perfect ending for this mash-up of craziness.
This book is absolutely terrifying, not so much in that it will scare you, but in that you have to cross your fingers and pray (or whatever you do) that people like this don't actually exist in the real world. Because if they did (and they do, unfortunately) - well, that would make for one ridiculously frightening world.
In case you didn't get it from this review, I absolutely loved it.

Summary (from Goodreads):Haunted is a novel made up of twenty-three horrifying, hilarious, and stomach-churning stories. They’re told by people who have answered an ad for a writer’s retreat and unwittingly joined a “Survivor”-like scenario where the host withholds heat, power, and food. As the storytellers grow more desperate, their tales become more extreme, and they ruthlessly plot to make themselves the hero of the reality show that will surely be made from their plight. This is one of the most disturbing and outrageous books you’ll ever read, one that could only come from the mind of Chuck Palahniuk.

Final Question: Have you read any other Chuck Palahniuk? What is your favorite? In general, do you like him, or do you find him to be too extreme?

Posted by brizmus at 8:24 AM
Email ThisBlogThis!Share to TwitterShare to FacebookShare to Pinterest
Labels: 4 stars, chuck palahniuk, horror

Definitely not one for me. I fall into the faint hearted category or otherwise known as a complete wimp. Great review for brave people though!

Interesting review - although I'm not sure I would like it, my partner is a Palahniuk fan and definitely would. So I'm thinking - possible Christmas book choice. Thanks for this!

We do have a few of his books at home but I haven't tried any out yet. I'm quite tempted by Lullaby though.

I have this but haven't read much of it. i skimmed it when i first got it. Disturbing!!

I'm not so good with 'in your face disturbing' so haven't read any of Palahniuk. I find that the majority of the people know that read him are male which is interesting. I might try another one of his at one stage but doubt I'll use this one as my initiation ;)

Never read a book by him. But I'm intrigued now and have to try him!
Any suggestions with what to start?

I did try - honest - but it was too extreme for me. Like Becky, I think I'd include myself in the complete wimp category. Even the cover of this book makes the hairs stand up on my arms, spooky.

I can't get past the creepy cover! This might be one for Jake.

You have peaked my curiosity! Thanks for linking this up...I enjoyed reading your review.