I have FINALLY, a week after the fact, recovered enough from the read-a-thon to actually WANT to spend time in front of my blog again. Which means I can get to reviewing the books that I read during the read-a-thon. (Plus it's NaNoWriMo, so I have to procrastinate.) Yay! 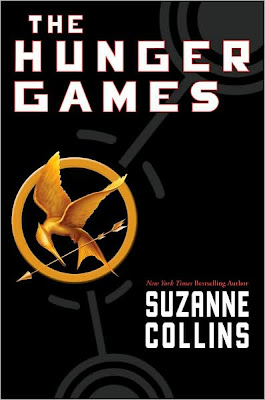 What I Have to Say: I feel like "whirlwind" and "rollercoaster ride" are two very overused phrases when it comes to reviews. It's thus a good thing that I don't want to use them here, because they are far from describing the sheer awesomeness of this book. They're just not enough. It was more like Charlie's ride in the elevator at the end of "Charlie and the Chocolate Factory." It starts going up, and it's interesting and cool and getting more and more exciting. And just when you think it can't be more awesome than that, the elevator explodes out of the ceiling into an infinite space and new realms of unknown coolness and awesomeness.
In other words, this book was GOOD. VERY GOOD. The futuristic dystopian world that Suzanne Collins has created so believable and horrifying that at times I forgot she was talking about a place that doesn't actually exist. And thank god. It is frightening and violent and gripping and disgusting and yet you just can't keep turning the pages. Because even though you know that what comes next will probably make you cringe, you have to know. This book sucks you in and doesn't spit you out until well after it's over, after you've spent several days or even weeks thinking about what you've just read.
It also manages to contain within all that gore and non-stop action a teenage love story that breaks all norms and doesn't fit in with the typical YA romance. It is something entirely new and entirely different that fits perfectly with the book and the world and the plotline that Suzanne Collins has created.
I know everyone has already read this or at least read a thousand reviews of this, so I won't bore you by saying the same things all over again.
Just remember this - this book surpasses genre. It is YA, yes. It is dystopian fiction, yes. But oh, it is also SO much more than that. Be prepared for the game of a lifetime.
Think Battle Royale but less complex and, dare I say it, far more gripping and awe-inspiring.

Summary:Katniss is a 16-year-old girl living with her mother and younger sister in the poorest district of Panem, the remains of what used be the United States. Long ago the districts waged war on the Capitol and were defeated. As part of the surrender terms, each district agreed to send one boy and one girl to appear in an annual televised event called, "The Hunger Games." The terrain, rules, and level of audience participation may change but one thing is constant: kill or be killed. When Kat's sister is chosen by lottery, Kat steps up to go in her place.
Posted by brizmus at 5:14 PM
Email ThisBlogThis!Share to TwitterShare to FacebookShare to Pinterest
Labels: 5 stars

So glad you loved it! I FINALLY got my boyfriend to read it after months of begging. He read it in a day, nodded and said, "It was good." Which, coming from him, is the equivalent of a 13 yo girl jumping up and down say "Squeeeeeeeeee!"

Awesomeness! I have not been able to come up with the words to describe how great this book and Catching Fire are. You did a wonderful job with the review. I can't wait to hear what you say on Catching fire. We have been discussing these books over at Barnes and Nobles Fantasy thread as well. Wow kind of books.

Great review. I see how much you enjoyed this. Glad to hear I am not the only Nano procrasinator! What's your Nano username? I could be your Nano avoidance buddy ;)

Oh my. I think I have to read this right away! Your review is awesome :) It makes me excited to read it.

It's wonderful isn't it? I love this book.

I'm picking this one up soon! Great review!

I have an award for you! http://gofita.blogspot.com/2009/11/one-lovely-blog-award.html

Glad you made it through the read-a-thon.

This is a wonderful book and you're review did it justice!

Oh, so glad you've joined the dark side. :D Amazing book and now I'm dying to get my hands on the third one.

It seems like EVERYONE who reads this book loves it! I will have to track it down ASAP.

I love this one too (and haven't really met anyone who doesn't love it)!

AHHH! I'm so glad you liked this one. I had an experience very like Rhiannon's, but with my brother. I mean, I liked this book so much that I told absolute strangers about it. And then my brother (well, one of them) refused to read it. I begged him to read it. And finally I read the first two chapters aloud. He finished it the next day and told me how he got 'sucked in.'
I love it when there's a book like this that appeals to just about everyone. Great stuff.

loved this one too! i'll be reading battle royale soon so it sounds like i may like it too.