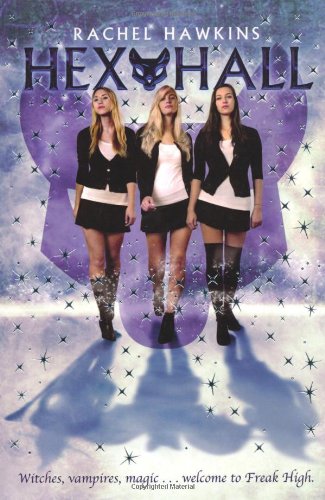 Who Should Read It? lovers of witches and fun, fluffy, magical paranormal who are looking for a short escape from the world!

What I Have to Say:
Wow! That's what I have to say about this. I have been super mega crazy busy lately balancing full time school work with what feels like a full time job, and this book was really just what the doctor ordered. It was fun, it was fluff, and it was full of mean witches and nice witches and, most importantly, MAGIC!

Hex Hall has a very typical plot: a witch who doesn't know about her background finds herself in a boarding school where there are mean people and nice people, an especially hot but taken guy, and some extra suspicious and creepy things happening. It is written with such humour and pizazz (I really can't think of a better word), though, that that's where the comparisons to other books end, and Hex Hall ends up coming across as fun and fresh and unique.

First of all, Sophie Mercer the witch is a teen that everyone can like. She's so sure of herself and of being good that it was sometimes hard to believe that she was actually a teenager. She came across as a very Meg Cabot-esque character, which, to me, can be nothing but good. She was adorably witty and quirky, and an absolute pleasure to read.

I loved this book. It was totally Sabrina the Teenage Witch meets Meg Cabot - throw in any number of other mythical creatures and a bit of scary intrigue, and you've got Hex Hall. It's nothing serious, but it really is a marvelous escape from the world for a few hours! If that's what you're looking for, definitely pick this book up!

Summary: Three years ago, Sophie Mercer discovered that she was a witch. It's gotten her into a few scrapes. Her non-gifted mother has been as supportive as possible, consulting Sophie's estranged father--an elusive European warlock--only when necessary. But when Sophie attracts too much human attention for a prom-night spell gone horribly wrong, it's her dad who decides her punishment: exile to Hex Hall, an isolated reform school for wayward Prodigium, a.k.a. witches, faeries, and shapeshifters.

By the end of her first day among fellow freak-teens, Sophie has quite a scorecard: three powerful enemies who look like supermodels, a futile crush on a gorgeous warlock, a creepy tagalong ghost, and a new roommate who happens to be the most hated person and only vampire on campus. Worse, Sophie soon learns that a mysterious predator has been attacking students, and her only friend is the number-one suspect.

As a series of blood-curdling mysteries starts to converge, Sophie prepares for the biggest threat of all: an ancient secret society determined to destroy all Prodigium, especially her.

Cover Story: I think both the British and American covers are awesome, and they both totally make me want to read the book - the British one because it reminds me of that totally rad movie the Craft and the American one because it looks magic and innocent at the same time. And yet, I don't really think that either really fits all that well with the book.
Posted by brizmus at 4:37 AM
Email ThisBlogThis!Share to TwitterShare to FacebookShare to Pinterest
Labels: 4 stars

You're so right. In most witchy books they always have some sort of restriction. Great review.

Sounds fun, and I totally love that US cover, so pretty. But this one sure makes me think of the craft too

Looks and sounds like a fun kind of read, thanks for the recommendation.

I enjoyed this one and it made me laugh. THanks for the review.

I loved this book! I need the 2nd one. team Archer :D

I had this out from the library a while back but got busy and had to return it unread. Now I'm off to put another hold on it! Sabrina meets Meg Cabot sounds very very good to me.