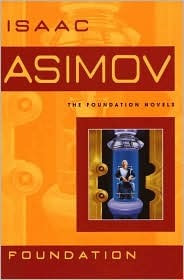 Who Should Read It? all lovers of science fiction

What I Have to Say:
Foundation is a reread for me (I read it way back when I was in high school), and to be honest, I can't decide if I liked it more then or if I liked it more now. Which probably means that I felt the same way about it both times.
Which is that it is a well-written, intriguing work of thoughtful science fiction.
When it comes down to it, Foundation is the type of science fiction that I SHOULD love. It takes place in a believable, scary future, Earth isn't remembered or maybe doesn't even exist, the entire galaxy is populated, and there are lots of cool future gadgets. More than that, it is filled with intelligent people who have to think in interesting, convoluted ways to make the things that happen happen. It even starts off with a mathematician - brilliance!

And that is why I DID love this book - I loved trying to figure out how the people were going to think or how they were thinking and what conclusions this would lead them to. It was like a mystery, but one in which you just have to unravel intelligence. The narrative flows beautifully, and the plot is just complex enough to keep you exited and thinking without feeling like Asimov was trying too hard.

When it comes down to it, Foundation really is the perfect science fiction novel, and it's no wonder that it won the Hugo and was named "Best Science Fiction Series of All Time."

But (you knew there was a but coming), I'm not the hugest fan of short stories, and Foundation is, essentially, a series of short stories. Granted, the short stories are so well-linked that you sometimes forget, but when it comes down to it, each chapter is a new story. In each chapter, at least 50 years have passed since the last one, entirely new characters are introduced, and the old ones, for the most part, are rarely mentioned again. The thing linking them is Harri Seldon and the Foundation that he created. It is because of this that, even though I loved it, I can't say that I LOVED it.

Still, Foundation is one tight piece of work, and I would recommend it to any and all lovers of science fiction. I mean, when it comes to science fiction, this is it! And I know I'll be rereading the others in the series as well!

Summary: For twelve thousand years the Galactic Empire had ruled supreme. Now it is dying a slow death from entropy and corruption. Only Hari Seldon, creator of the revolutionary science of psychohistory, can see into the future - a dark age of ignorance, barbarism, and warfare. Knowledge will decay and order will vanish. Interstellar wars will be endless; interstellar trade will come to a halt. Populations will suffer catastrophic declines and worlds will lose touch with the main body of the Galaxy." "So to preserve the accumulated wisdom of the ages and save mankind, Seldon gathers the best minds in the Empire - both scientists and scholars - and brings them to a bleak planet at the edge of the Galaxy to serve as a beacon of hope for future generations. He calls his sanctuary the Foundation." But soon the fledgling Foundation finds itself at the mercy of corrupt warlords rising in the wake of the receding Empire. Mankind's last best hope is faced with an agonizing choice. They can either submit to the barbarians and live as slaves - or take a stand for freedom and risk total destruction.

Cover Story: Frankly, not a fan. It seems plain and slightly boring even for this book. And the color? Hideous! So not my thing!
Posted by brizmus at 5:23 AM
Email ThisBlogThis!Share to TwitterShare to FacebookShare to Pinterest
Labels: 4 stars

While I've certainly heard of this book I never actually knew what it was about. The fact that you like it so much makes me want to read it but I'm also not enthusiastic about books that are told in a series of loosely related stories. Plus I'm still a bit nervous about trying such a hard core scifi book. But who knows, maybe I'm ready for it ;)

on our shelves, I may well dust this one off and give it a read.

I am such a newbie when it comes to sci.fi, perhaps cos I always end up lining strange sci-fi. No should not say strange, just not shooting, ships, and stuff, so could like this one