This is my first Nihon no Kinyoubi using one of the new buttons, and I'm psyched! I hope you guys like it as much as I do!

Anyhow, this week, since the release of Mockingjay is so recent and the story so fresh in my mind, I thought I'd share with you guys the Japanese cover of the Hunger Games. 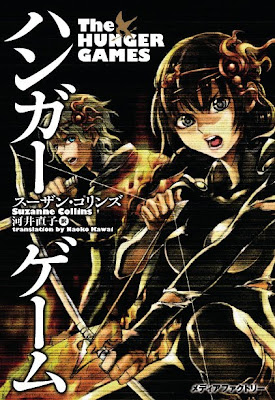 It's SO different from the US, British, and Australian covers, isn't it? It's really super cool, though. I actually kind of love it.
With the drawing and with Katniss looking so hardcore on the cover, it really seems VERY Japanese to me. The Japanese title is ハンガーゲーム, which, sounded out, is HungaaGeemu. They like to take English words in Japanese and keep then, just a little Japanesified.

Anyhow, what do you guys think? I would post some of the other covers, but I think we've all already seen them by now. And this is the only one released in Japan so far (the poor Japanese having to wait so long!).
Posted by brizmus at 7:36 AM
Email ThisBlogThis!Share to TwitterShare to FacebookShare to Pinterest
Labels: ff, jf

I agree with Blodeuedd, very manga! But I do like it. It looks so good. A story with a lot of action!

I love it too!

You're telling me, this is a novel, not a manga?! Ok I love that cover, I can't wait to see their cover for Catching Fire and Mockingjay!

They used the same colour as the US cover too! Black and gold-ish colour. :D

Loving the button. Sadly though I seem unable to view the book cover - I've been back several times hoping to see it but to no avail, there is just an empty box where it should be.

Yes! Finally! I have seen the cover. Not too sure if I like it or not, the jury is out on this one.

Oooooh...my button up in lights! I'm so glad you're loving it...it looks good with your JF post!

I received my book too...thank you so much!

I LOVE that cover! Very awesome!

Awesome! I still have not read this. LOL I am working on it.