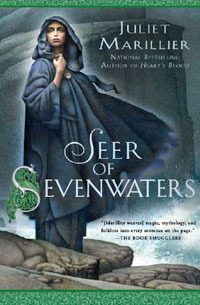 Seer of Sevenwaters by Juliette Marillier

Summary:The young seer Sibeal is visiting an island of elite warriors, prior to making her final pledge as a druid. It’s there she finds Felix, a survivor of a Viking shipwreck, who’s lost his memory. The scholarly Felix and Sibeal form a natural bond. He could even be her soul mate, but Sibeal’s vocation is her true calling, and her heart must answer.

As Felix fully regains his memory, Sibeal has a runic divination showing her that Felix must go on a perilous mission—and that she will join him. The rough waters and the sea creatures they will face are no match for Sibeal’s own inner turmoil. She must choose between the two things that tug at her soul—her spirituality and a chance at love…

So, this is the fifth book in a series that I haven't started yet. Mostly because I had never heard of it before. But I've been reading a lot of epic fantasy lately, and while I don't think it exactly fits the bill, it looks AMAZING! Five books in already, but I'm thinking I might start this series!
Posted by brizmus at 8:03 AM
Email ThisBlogThis!Share to TwitterShare to FacebookShare to Pinterest
Labels: WoW

Good choice, I really loved one of her books..but the rest kind of depressed me

I didn't realize this series was still ongoing. I loved the first book but can't actually remember if I read the second one. I keep meaning to go back and read the whole series.