The Nobel Prize for Literature and Picking Books Based on Winnings

For someone who adores books as much as I do, I really spend VERY little time thinking about which book is going to or has one what award.

You would think that this should be something that would interest me - as someone who reads books of pretty much every genre, I have to be fairly picky about the books that I choose to read, and winning an award SHOULD be a marker of quality. And yet, every time I have read a book because it won some award or another, I have been disappointed.

Clearly my definition of quality is not the same as that of the award givers.

Man Booker, for example, has done very little other than disappoint me. While I do think that, in general, the Hugo Award and the Nebula award are a great way to find some quality science fiction, they aren't always consistent. And every time I have decided to read a book because they HAVE won this award, I have been disappointed. 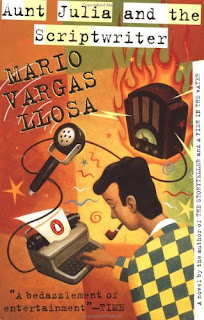 As such, when I heard that Mario Varcas Llosa had won the Nobel Prize for literature this year, I'd never heard of him or any of his book, so I said "eh" and moved on with my life, not giving it a second thought. I mean, in 2008 and 2009, the books picked were "poetic," which is usually NOT my thing.

The last time I took an interest in the Nobel Prize for Literature was in 2001, when V.S. Naipul won the prize, and that's only because I already love him. In 1998, Jose Saramago won the prize, and while I adored Blindness, I didn't actually know that the author was a Nobel Literature Laureate until AFTER reading the book.

Choosing to read books because they've won a prize - so not my thing.

And yet, since hearing the announcement this year, I find myself consistently checking out the goodreads and amazon pages for "Aunt Julia and the Screenwriter," and the more I look at the cover and read the summary, the more I want to read this book. And staring at it long enough has of course also led me to the pages for "Death in the Andes" and "Bad Girl" and I'm seriously thinking about giving in reading at least one of his books based on a Nobel recommendation.

So what do you guys think? Do you often pick books based on the prizes they have won? Are there any prizes that you particularly trust?
Posted by brizmus at 9:46 AM
Email ThisBlogThis!Share to TwitterShare to FacebookShare to Pinterest
Labels: book prizes, Man Booker, nobel

I don't even looks at the symbols and seals that cover books. I personally don't give a hoot.

I'm the same way; awards don't really impress me, and books with awards are sometimes highly overrated and fall flat. Take the Oprah Seal of Aproval for example. I'v never been attracted to a book that bore that insignia nor have I had my socks blown off by one.
BTW, BOO!

I really don't pay any attention to these book awards. If I'm looking for a recommendation I'll turn to people that I know and whose opinions I trust. On the other hand, I do feel happy for authors whose books I've enjoyed and who win these awards because they deserve the recognition for all their hard work.

I don't. But if I hear lots of positive things about a book from my book blogging buddies, then I will check it out :)

Like you I'm not generally too aware of which books are up for which prizes. Last year was the first time I ever bought all the books that were up for some prize or other (the Booker or Orange I think)and that was only because they were on special offer and very cheap.