Review: Acacia: The War With the Mein by David Anthony Durham 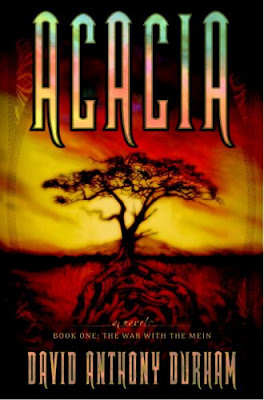 Title: Acacia: the War With the Mein

Who Should Read It? If you love epic style fantasy, then this absolutely the book for you. It is super good, for real!

What I Have to Say:
So, I'm a HUGE fan of fantasy, but it's been an extraordinarily long time since I last read an epic fantasy like Acacia. To be honest, I think I've always been a little bit afraid of them - I mean, they tend to be SO long, and there are SO MANY other books that I want to read that I'm sort-of afraid to "waste" my time with such a lengthy book. But then, when I read one, I NEVER feel like it was time wasted.

Acacia, the beginning of the Acacia Trilogy was no exception to this. It was long, but it was in no way time wasted. And it's funny - because of how extraordinarily engaging and awesome it was, I found that I read it more quickly than the typical shorter book that I read. Acacia was a true case of "I can't put this book down!"

Acacia is separated into three different books, and it almost seems as if each one of them should be reviewed separately despite the way they so easily flow one into the other.

In the first book, we learn about the Empire, how it was formed, and the horrrible evils of slavery and the Mist that are associated with the empire. Most importantly, we get to know the four Akaron children as children of the kind king, members of the Empire, and we begin to get to know the Mein. What was so interesting about this was that, while the Mein were so clearly supposed to be the bad guys and the Empire the good guys, it was really hard for me to pick anyone out as a real good guy or a real bad guy. Durham did a masterful job at allowing us to see how evil really is in the eye of the beholder. More than that, we saw how people can remain truly good while promoting and being a part of something extraordinarily evil.

In the second book, the Akaron children are all carted off to four different corners of the Empire, and while things don't go exactly as planned, they all find themselves in completely unique situations that allow them to mature into strong but very different people. The fact that they each grew up in a different race, surrounded by different beliefs and different cultures allowed the reader to really get a grasp for this world and the ways in which it parallels the world in which we live today. It also allowed him to continue with his theme of good versus evil. This second book was, by far, my favorite of the three. It was easily the most solid and most well written of the three, and I found it so exciting to get to learn about all these different cultures while still knowing that it was leading up to something big and exciting. It was interesting and fun to compare these fictional, fantasy worlds with those that we know today or have known in the past.

In the third book, well, I don't want to give too much away, but Durham ends us off with an absolute BANG! Things come to a climax with a boom, mixing the unexpected with the expected, the good with the evil, and ideals with treachery. It has you feeling utterly satisfied while still craving more, more, MORE!

The characters are extraordinarily well-developed, living, breathing beings, and this in no way takes away from the aliveness and realness of the worlds he created. No word was wasted, everything was beautifully described and played out. Durham has a way with words that, in the epic fantasy, had room to flourish. I've never read anything else by him, but I would say this is his genre. This book was great! And I am SO psyched to have the second one waiting. I would be much disturbed if I had to wait.

Summary: Leodan Akaran, ruler of the Known World, has inherited generations of apparent peace and prosperity, won ages ago by his ancestors. A widower of high intelligence, he presides over an empire called Acacia, after the idyllic island from which he rules. He dotes on his four children and hides from them the dark realities of traffic in drugs and human lives on which their prosperity depends. He hopes that he might change this, but powerful forces stand in his way. And then a deadly assassin sent from a race called the Mein, exiled long ago to an ice-locked stronghold in the frozen north, strikes at Leodan in the heart of Acacia while they unleash surprise attacks across the empire. On his deathbed, Leodan puts into play a plan to allow his children to escape, each to their separate destiny. And so his children begin a quest to avenge their father's death and restore the Acacian empire–this time on the basis of universal freedom.

ACACIA is a thrilling work of literary imagination that creates an all-enveloping and mythic world that will carry readers away. It is a timeless tale of heroism and betrayal, of treachery and revenge, of primal wrongs and ultimate redemption. David Durham has reimagined the epic narrative for our time in a book that will surely mark his breakthrough to a wide audience.

Cover Story: It's weird - I read this book on my kindle, and I had never actually SEEN the cover until right now when I was looking for a picture of it to put in the post. I can't even remember the last time when a cover in NO WAY affected my desire to read a book. My afterimpression of the cover is no more than a noncommittal "eh."
Posted by brizmus at 9:27 AM
Email ThisBlogThis!Share to TwitterShare to FacebookShare to Pinterest
Labels: 4 1/2 stars

I tried reading this one in Swedish but gave up :( Honestly Swedish translations of fantasy usually suck

3 for the price of one. That's neat

I had started this book last year after hearing great things about it but I didn't get too far in. I think it was just too dark for the mood I was in at the time. I've been intending to try it again though, since I already own it, but I forgot about it. Thanks for the reminder. I'm glad to see that you enjoyed it. Gives me even more of an incentive to give the book another try.