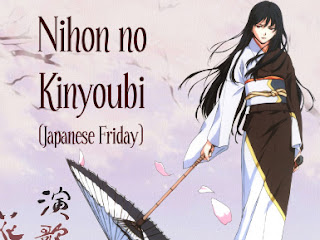 This week I thought I would treat you guys to a review of a book of Japanese stories that I absolutely loved! Since it's close to Halloween, I think it's especially appropriate!! 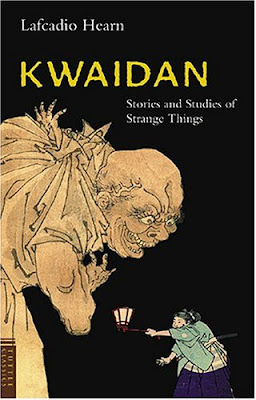 Who Should Read It? This is a fabulous book for anyone interested in ghost stories or Japan!

What I Have to Say:
Kwaidan is a beautiful selection of Japanese ghost stories; some of them are horrifying, some of them are touching, and all of them provide an intricate look into the many subtleties that make up the Japanese culture. I am greatly enjoyed each and every story in this book, and each of them I enjoyed for different reasons. Some of the stories were translations of old Japanese texts wheras, for others, this book was the first place they were ever written. The author heard them while traveling through small-town Japan and enjoyed them so much that he transcribed them. Because of this, it is somewhat difficult to write a real review. The stories are not his; they aren't even retellings, but the author does an amazing job of transcribing/translating them and making them his own. Obviously, some things are lost in translation, but the author did a great job of minimalizing this loss, and I really feel like I got the full effect of what was originally being said.

At the end of this book, there was a brief study of insects in relation to Japanese culture which I found absolutely FASCINATING. I found the sections on ants and butterflies to be especially enjoyable (though I should perhaps note that I am slightly obsessed with ants). The chosen poems and texts along with the author's observations and commentary gave me great insight as to the roles that insects played (and insects are VERY prominent in Japan) in ancient Japan.

I GREATLY enjoyed this book (and learned a lot!), and, for the first time in a very long time, I found myself so enraptured that I couldn't stop myself from staying up into the wee hours of the morning reading. I highly recommend this selection of stories to anyone who is even remotely interested in Japanese culture.

Summary: KWAIDAN is a collection of weird, ghostly legends and beliefs of old Japan. Hearn spent 14 years in Japan, translating into English with superb effect the atmosphere of the tales which he avidly collected.

Based on Japanese literature and folklore, KWAIDAN contains 17 stories. The stories of Loichi, the blind biwa player who was called to perform for the dead; of Muso, the journeying priest who encountered a man-eating goblin; of the samurai who outwitted the ghost of a dead man. All these plus 14 other spooky tales are included in this collection.

Cover Story: It's so creepy and Japanesey and perfect! I absolutely LOVE it! With a capital heart! :-)
Posted by brizmus at 8:55 AM
Email ThisBlogThis!Share to TwitterShare to FacebookShare to Pinterest
Labels: 4 1/2 stars, ff, jf

I keep getting notices that comments are posted but nothing is there and when I posted a blog last night...

O that does sound fascinating!

The art on this is amazing. I don't know why I am so mesmerized