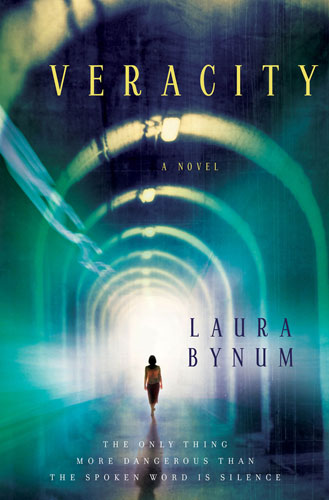 Who Should Read It? Lovers of dystopian fiction, young and old alike. Anyone looking for an exciting, fast-paced sci-fi read that doesn't mind a little bit of politics added into the mix.

What I Have to Say:
ve-rac-i-ty: habitual observance of truth in speech or statement; truthfulness; conformity to truth or fact

Veracity is one of the most believable dystopian fiction novels I have read, because it is so closely based on what seems to be happening in our world today. Slowly, all of their freedoms are taken away for the sake of "security." Over half of the population is killed from a huge pandemic (in real life, "they" keep announcing that one is going to happen any day now). The government slowly takes more and more liberties with the peoples' lives in the name of making their lives more easily livable. Slowly, their world becomes socialist, which slowly and easily turns into totalitarianism. Hmmmm. . .sounds very familiar to me, and I can easily imagine what is happening in the United States today turning into this book. We'll still be allowed to smoke cigarettes, killing everyone around us, and eat meat, thus torturing the animals of the world, but words will be Red-Listed, and if we say them, the slates implanted in our necks will give off an electric charge, quite possibly killing us.

Laura Bynum's "Veracity" was so spine-chilling and frightening because IT COULD HAPPEN. It makes you grateful for the world you live in while at the same opening your eyes to the fact that the path on which we are presently might lead us to such a devestating freedomless world, in which you can't even say the word "democracy" unless you are willing to risk possible death from slate-shock.

Her descriptions of this future dystopic world were vivid and gruesome, and the characters with which she peopled her world were well thought-out and brutal, from the moniters with their extra-sensory abilities to the Blue Coats who raped and tortured without a second thought to the resistance who stayed strong and believed in truth and freedom through it all.

Harper Adams is a very interesting protagonist, and in a way, she sort of makes the book. She's a complete walking contradiction - strong yet weak, bold yet timid. At times she's a leader, and at other times it seems like circumstances have her following a course that she might not otherwise have followed. If it weren't for her daughter, would she ever have found the courage to do what she did? Would she ever have had the desire? She was an amazing protagonist, and it was an absolute joy reading her story.

There were, of course, a couple problems that I had wwith this book. It jumped time periods with regular consistency, and since the time periods were always so close together, it was sometimes hard to follow. I kept having to look back to see if the previous chapter also took place in 2045, and if so, in what month. Also, I wanted to know SO MUCH MORE! There was so much more background information that I wanted, but it just wasn't there. And it would have been hard to put it there because there was alreay SO MUCH INFORMATION! I think that the book could have been a good 100 pages longer, but at the same time, if it had been this might have been overwhelming for some.

These problems, though, in no way dampen the impact and enjoyability of this book. It will have you turning pages in a frenzy and thinking for days. I highly recommend it to all lovers of dystopian fiction!

Summary: Harper Adams was six years old in 2012 when an act of viral terrorism wiped out one-half of the country's population. Out of the ashes rose a new government, the Confederation of the Willing, dedicated to maintaining order at any cost. The populace is controlled via government-sanctioned sex and drugs, a brutal police force known as the Blue Coats, and a device called the slate, a mandatory implant that monitors every word a person speaks. To utter a Red-Listed, forbidden word is to risk physical punishment or even death.

But there are those who resist. Guided by the fabled "Book of Noah," they are determined to shake the people from their apathy and ignorance, and are prepared to start a war in the name of freedom. The newest member of this resistance is Harper -- a woman driven by memories of a daughter lost, a daughter whose very name was erased by the Red List. And she possesses a power that could make her the underground warriors' ultimate weapon -- or the instrument of their destruction.

In the tradition of Margaret Atwood's The Handmaid's Tale, Laura Bynum has written an astonishing debut novel about a chilling, all-too-plausible future in which speech is a weapon and security comes at the highest price of all.

Cover Story: Okay, so I don't like this cover. I like the color, but it doesn't really feel like the book to me at all. It seems to be a complete misrepresentation.

Disclosure: This book was provided by Pocket Books, which in no way reflected my review.

Posted by brizmus at 10:57 AM
Email ThisBlogThis!Share to TwitterShare to FacebookShare to Pinterest
Labels: 4 1/2 stars, late, pocket books, tour

With this review, you've taken a book I may have passed on and convinced me I must read it. Thank you for the awesome review :)

I like the premise for this but I'm hesitant now because of the time switches. I don't think I like moving backwards and forwards in time based on my recent reads. Great interesting review.

Very good review. I havent read any dystopian fiction novels, but I keep hearing such great things about the subject. It does sounds very interesting. I agree with you on the cover. :)

It sounds like a really good book and I agree, It wouldn't surprise me if some of the things talked about happened. Hitler managed it...maybe someone else could. Thanks for the review.

Love the cover. Sounds like my kind of book :)

Gosh, it seems like dystopia is really taking off lately! I wonder if that is a reflection of our world today- I often think that literary trends tie into what we fear (like the whole superhero thing of the 1940s and 1950s). This sounds like a really hard-hitting book!

Darn, I should have reviewed this one. It sounds pretty fun to read.

Sounds promising. Though not a huge sci-fi fan this appeals to me because of what you had to say about the main character - I love reading novels with complex women characters.

I agree with Petty Witter, this book does sound promising. This book does appeal to me and I believe I would enjoy reading. Thanks for your great review.

I have this one sitting here to read. Thank you for the great review. I may have to shuffle my pile around again. lol. This is getting hard. I want to read them all!