Interview: Peter Bognanni, Author of the House of Tomorrow 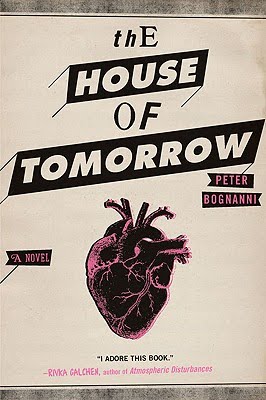 As those of you that read my review know, when I read Peter Bognanni's the House of Tomorrow, I absolutely fell in love! Which is why I am more excited than ever that Peter agreed to answer a few questions for Brizmus Blogs Books. Let's get started!

Brizmus Blogs Books: Hi Peter! Thank you SO MUCH for taking time to answer a few questions for Brizmus Blogs Books. I absolutely ADORED the House of Tomorrow, and I am so excited to be hosting an interview with you. My first question is just this: Buckminster Fuller? He just seems like such a random basis for a book. Could you please talk a little bit about your relationship to him, how he came to be such a major part of the book.

Peter Bognanni: To be perfectly honest, I started the book knowing very little about Bucky. I had seen him on a postage stamp once (great stamp by the way) and I knew a little about geo-domes. But everything started after a conversation my wife had at a party. Someone at this party told her, pretty much out of the blue, that he lived in a dome with his grandmother. My wife related the conversation to me in the car on the way home, and the next day I started to become dome-obsessed. I must have looked at domes for four hours the next morning. This obsession led me to R. Buckminster Fuller, inventor of the geodesic dome. And the more I read about him, the more I became fascinated. Such wild ideas. Such enthusiasm. Such large glasses! He wanted to encase all of Manhattan in a giant climate-controlled dome. He wanted humans to live in floating dome cities that would migrate around the globe. He firmly believed in telepathy. How can you not love this guy? I started to imagine what it might be like for someone to grow up living Bucky’s principle to the fullest. That’s how the protagonist of my book, Sebastian, was born.

BBB: Where did you get the idea to write about a boy who had had a heart transplant? Was it something that just happened over the course of the book because you needed Jared to be sick, or did you set out with this idea in mind? 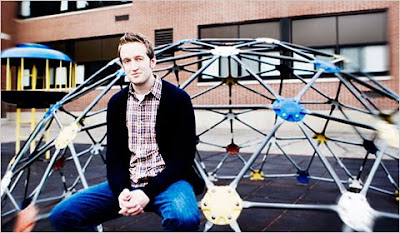 Peter: Jared was actually a character that I kind of air-lifted from another novel that was going exactly nowhere. He’s loosely based on someone I knew growing up, or at least the detail of the transplant is. I really knew a chain-smoking transplant recipient. Only he played the drums, not guitar. Jared’s personality is much different though, a kind of amalgam of a lot of funny and caustic people I hung around with in high school. I never really thought of the transplant as a “fictional device” per se; it was just always the way I envisioned the character. But from the beginning, I liked the idea of writing this enigmatic person who was both vulnerable and abrasive at the same time. Also, I think his affliction allowed him to be both delightfully immature, and wiser than his years, sometimes on the same page.

BBB: I read that you were in a (bad) punk band in high school, and I’m very curious about this. What were you called, did you ever record anything, and is Jared and Sebastians‘s punk band experience based on your experiences?

Peter: The band I played with in high school had about ten different names, if memory serves. We could never decide on one. And it might be unfair to call us a punk band. We were more a play-as-loud-and-out-of-tune-as-you-can-until-you-get-tired kind of band. Some ungodly brand of noise rock, I suppose. But if you’d asked us if we were punks, we might have nodded. And yes, that experience acted as an influence on Sebastian and Jared’s band. Undeniably so. I can still remember learning my first power chords, plugging into an amp for the first time, and many other small moments that pretty much ended up in the book wholesale. Despite my lack of talent, music was enormously important for me growing up. It was a way to imagine other lives, other selves. It was transformative. And it made me feel better about my bad haircut and large dental apparatus.

BBB: Are you working on anything else right now? Can we expect more YA from you in the future?

Peter: I’m working on two things right now and they are currently battling for supremacy in my laptop. As far as YA goes, this book is being cross-listed as adult and young adult and I love the idea of reaching both readers. I really like writing teenage characters, so I’m sure they’ll continue to appear in my books, but I might go a little older with my next protagonist. I turned 31 this year. I probably have an expiration date on my ability to write from the perspective of a profane teenager. But it helps that there’s one locked inside of me.

BBB: Okay, last question! Give me some quick one-word answers!

Favorite geodesic dome: The Botanical Center in Des Moines, Iowa. This is a clear geodesic dome in my hometown. I went to a Homecoming Dance here and suffered humiliations similar to those of my characters. 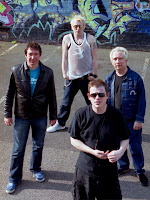 Favorite punk band: The Buzzcocks. I can’t get enough of them. They’re funny. They rock. They make me feel angry and bemused simultaneously.

Literary Idol: Ah, torturous question to answer. I absolutely devoured Kurt Vonnegut in high school, and no matter how many more literary heroes I have and will amass, I always feel a little dishonest when I don’t mention him. He made me want to be a compulsive reader. Which, in turn, made me want to be a writer.

Favorite music to listen to while writing: Can’t really do this. Too distracting. I’ll start writing the lyrics of a song right into the prose. The night was like a…Blitzkrieg Bop. For this book though, I would stop here and there to listen to songs I was writing about. It’s nice to take a break from trying to write something literary only to listen to a Ramone shout about sniffing glue.

Favorite food to eat while writing: Get ready for the least Punk Rock answer of all time. You ready? Yoplait Yogurt. That’s right, I said it.

BBB:Back to me now - what a GREAT interview! Again, thanks SO much Peter for answering a few questions for me, especially with such fabulous answers! I laughed on more than one occasion. For those of my readers that haven't read Vonnegut or listened to the Buzzcocks, I highly recommend you do so now!
I also highly recommend that you check out this awesome trailer for the House of Tomorrow.

Posted by brizmus at 7:54 AM
Email ThisBlogThis!Share to TwitterShare to FacebookShare to Pinterest
Labels: interview

Great interview! I seemed to have missed your review of The House of Tomorrow, which I've never heard of before, so I'm going to check it out now. It sounds really interesting.

This was such a fun interview! I love the sound of The House of Tomorrow :)

Great interview!
Have not read Vonnegut or listened to Buzzz..but shall remedy that
And this one does sound cool