Nihon no Kinyoubi (Japanese Friday) is a weekly (or at least I try to make it weekly, though mostly I fail) feature here at Brizmus Blogs Books inspired by French Friday, which is a weekly feature hosted by Charlotte at the Book on the Hill. Charlotte features French bookish things, and I plan on featuring Japanese bookish things, though I won't limit myself if I find something non-bookish that I think will interest you guys. 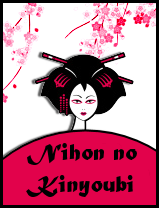 Who Should Read It? This is a fabulous book for those that geniuinely enjoy Japanese literary style. It is slightly whimsical, slightly fantastical, and conveys more meaning than what is actually said, than what could actually fit in a book this size. Think Haruki Murakami's simpler works or Kazuo Ishiguro.

What I Have to Say:
It felt really obvious to me that this was Banana Yoshimoto's first book. It seemed through the entirety as if style was being developed and ways to express ideas were being learned. And yet, it is fabulous. It's written in that unique Banana Yoshimoto style that I have grown to love over the years, with vague, simplistic ideas that always manage to contain so much more than it initially seems. And with time that passes so indistinctly that it almost feels like you're slowly floating in a bubble from one time to another without ever realizing that you're actually moving. Kitchen is separated into two parts, "Kitchen and Moonlight Shadow," and they both deal with a deep, painful sense of loss.

Kitchen is a beautifully touching story about how two people, Mikagi and Yuichi, learn to come together through their losses. It beautifully uses the concrete place of a kitchen to show how people can find comfort and solace in the most interesting, simplistic things. Touching kitchen utensils, listening to a refrigerator. . . It is a heartbreaking story about loss, yes, and throughout the story, the loss never once ends, but it is also a heartwarming story about family. After Mikagi loses her grandmother who raised her, she finds an odd kind of comfort and a new family when she is invited to live with Yoichi and his transsexual mother, Eriko. What is so amazing about this story is the way Banana Yoshimoto is able to evoke emotion with just the slightest play on words, the smallest description. If you're looking for something that resolves itself perfectly and leaves you feeling content, this book might not be for you. Loss never ends, and Kitchen, through its lack of resolution, will leave you remembering that, while also giving you hope that, eventually, life does go on, if we make an effort.

Moonlight Shadow has gotten some bad reviews, and this sort of makes me sad. It's so short that it can't stand alone, but I feel like if it hadn't been right after Kitchen in the book, people might be more open to it. It's sort of science fictiony, which some people say makes it feel wrong after Kitchen. Being another story about loss, though, I think it is perfectly place, and, despite its short length, I actually liked it more than Kitchen. As opposed to dealing with loss in a concrete way, via family and a kitchen or a couch, Moonlight Shadow seems to emphasize the importance of being able to properly say goodbye while still holding on. I don't want to say too much about it, because this story is so short that I feel like saying anything could give too much away. Just know that it is beautifully written and slightly whimsical. Moonlight Shadow is more compressed than Kitchen and slightly more resolved, but, as Banana Yoshimoto shows through her stories, loss never ends.

Summary: When Banana Yoshimoto's Kitchen was first published in Japan in 1988, "Banana-mania" seized the country. Kitchen won two of Japan's most prestigious literary prizes, climbed its way to the top of the best-seller list, then remained there for over a year and sold millions of copies. With the appearance of the critically acclaimed Tugumi (1989) and NP (1991), the Japanese literary world realized that in Banana Yoshimoto it was confronted not with a passing fluke but with a full-fledged phenomenon: a young writer of great talent and great passion whose work has quickly earned a place among the best of twentieth-century Japanese literature. Banana Yoshimoto's Kitchen is an enchantingly original and deeply affecting book that juxtaposes two tales about mothers, transsexuality, kitchens, love, tragedy, and the terms they all come to in the minds of a pair of free-spirited young women in contemporary Japan. Told in a whimsical style that recalls the early Marguerite Duras, "Kitchen" and its companion story, "Moonlight Shadow," are elegant tales whose seeming simplicity is the ruse of a masterful storyteller. They are the work of a very special new writer whose voice echoes in the mind and the soul.

Cover Story: I think the cover is elegant and simple, just like the book itself. And while I don't see it and immediately think "I want to read that!," it really is incredibly appropriate.
Posted by brizmus at 8:37 PM
Email ThisBlogThis!Share to TwitterShare to FacebookShare to Pinterest
Labels: 4 stars, ff, Japan, jf