Review: the Legend of the Caryph by Lynn Moyle

NOTE: I haven't received a single address for Pay It Forward. If you want to receive a gift, please comment on this post and send me your address. The first three addresses I receive will be participants. Thank you! 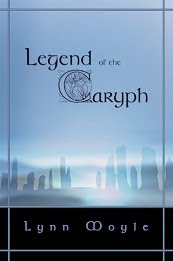 Title: the Legend of the Caryph

Who Should Read It? This is a great read for all fantasy lovers, though I would say it's geared more towards an older audience because of one sex scene.

What I Have to Say: "The Legend of the Caryph" was a pleasant, creative surprise that totally caught me off guard. Going into the book, I had no idea what a caryph was, and I just assumed that it was some kind of ancient amulet and that this book was the story of the legend come to life. I'm glad I didn't read the summary more carefully, as my ignorance on the subject left me awed and excited as I watched the story unravel, as Moyle introduced me to a world full of demons, with caryphs being the witches fighting to maintain the balance between good and evil.

In a way, this book reminded me of a slightly more hardcore "Buffy the Vampire Slayer." Only Regan seems to fight exclusively demons (where Buffy, not just slaying vampires, is sort of all over the place), and her powers far outweigh anything Buffy could ever dream of having. As Regan develops her powers and learns what it means to be a caryph and to live in a part of her world about which she had previously never even suspected the existence, the reader won't be able to stop themselves from loving her gutsy, independent, straightforward, and sometimes goofy character. Her interactions with everyone around her absolutely brought this story to life and helped to unveil the personalities of all of the secondary characters.

Regan reacts so well to all of the changes in her life which, as opposed to seeming unrealistic, just serves to reinforce her caryph nature. And when things start to really not go well for her, she totally steps up to the plate. I was rooting for her all the way. And the twist at the end, well, I was unprepared. I was so busy worrying about Regan that I never thought to think that the bad guy might, well, be the bad guy.

I really only had two problems with this book. The first is that the humor occasionally seemed forced and unnatural. Even when the humor seemed somewhat wrong or out of place, though, I did find myself laughing. The second is that, towards the end, there was a totally unnecessary, irrelevant, and lude sex scene. It was disturbing and, more than anything, it seemed out of place. The love story was adorable, and the sex just made it seem more like lust than love. It felt wrong. Without this scene, I would have wholeheartedly recommended this book to any and all fantasy lovers, young and old alike. Unfortunately, though, because of this scene, I'm going to have to say that this book is for the adults.

I greatly enjoyed this read, and I am super looking forward to the next installment in the story of Regan the Caryph and the gang.

Summary (from GoodReads): Centuries ago, an Order was formed to protect a select group of women who possessed powerful magic. These witches, known as Caryphs, were called upon to fight demonic forces released on the earth in an effort to enslave humanity. Regan Thompson is an inexperienced young college student whose life is suddenly ripped apart when she discovers she has inherited the powers of the Caryph. Like the others before her, Regan must somehow learn to harness the pure, raw magic that is buried deep within. But when a demon is set loose upon the earth, it is up to Order members Wendell and Alec to help Regan overcome her sheltered ways and quickly master her abilities in order to protect herself, her friends, and humankind. Lynn Moyle grew up in Humboldt, Iowa and now lives with her husband, Troy, and their children, Autumn and Archer, in Des Moines. When not writing or spending time with her family, Lynn works as a personal property claims adjuster for Allied Insurance. Legend of the Caryph is her first published book and she is currently working on the next installment.

Cover Story: I think this cover is beautiful, and it is a nice change from all those covers with butt-kicking women that I have been seeing lately. I find those to be a turn-off, where as this circle makes me think of stonehenge and definitely inspires me to open the book.

Disclosure: This book was sent to me by the author.
Posted by brizmus at 8:06 AM
Email ThisBlogThis!Share to TwitterShare to FacebookShare to Pinterest
Labels: 3 1/2 stars, fantasy challenge

I know where you're coming from. Read this book a while back, the love was so cute and nice, then suddenly a lovescene that was so out of place and out of character. It ruined the feel of the book for almost the rest of the book

I've never heard of this book before but it sounds great. I've recently come to the conclusion that I enjoy books more when I know very little about the plot, it makes the reading a lot more exciting when you really have no idea what will happen.
I generally find it disturbing how so many books these days ruin a good romance with unnecessary sex scenes.

Thanks for the review. Check out my blog at http://caryphchronicle.blogspot.com if you want any more information about the series or would like to provide suggestions.

My Expression
thanks for the blog very interesting
I've never heard of this book before but it sounds great. I've recently come to the conclusion that I enjoy books more when I know very little about the plot, it makes the reading a lot more exciting when you really have no idea what will happen.
thanks you!
gclub casino
golden slot mobile
gclub