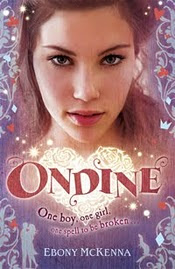 Title: Ondine: The Summer of Shambles

Who Should Read It? This is a great book for anyone who loves retellings of classic fairy tales. I think most YA and middle grade readers will absolutely get a kick out of it, but I would also recommend it to adults with a penchant for YA or adults just looking for a brief, funny escape.

What I Have to Say:
Ohman, this book was so absolutely quirkily and wittily fantastic. It starts off when Onine De Groot, native of the fantasy country of Brugel, accompanied by Shambles the ferret she just recently met, runs away from psychic summer camp and returns to her home, which just so happens to be in a bar. With a psychotically overprotective father.

On her way home, she discovers that Shambles can actually talk. Why? Because he's not a ferret, but a cursed prince. What follows is a laugh out loud hilarious retelling of the classic fairy tale, with Ondine the princess and Shambles the frog (don't tell Shambles I compared him to a frog, though - I'm sure he would be mightily offended). Shambles, with his Scottish accent and expressions (thank goodness there were footnoted translations, otherwise I would have been helplessly lost) and his quick-witted humour, absolutely made this book. His interactions with Ondine and the rest of her family had me laughing out loud on more than one occasion.

Ondine herself was funny, and she was very much your typical teenage girl. Her "falling in love" and "imagining hot guys" reminded me so much of my high school years that it made all those other books seem like they've got teenagers all wrong. Which at times made her ridiculous and annoying but was also slightly refreshing. We never really got to know her family too well, but what we did see added nicely to the image I had formed of Ondine, and their interactions (especially with her father and mother) were sometimes nearly as funny as the scenes with Shambles.

My biggest problem with this book? I would really like to know what Ebony McKenna has against vegetarians. There were so many references in here that made it seem like she thinks that vegetarians are unhealthy wusses. Which is ridiculous, because healthy vegetarians are by far healthier than meat eaters. And how is it wussy to choose a lifestyle that doesn't promote torture? It was weird, and it bothered me on more than one occasion.
I also had trouble understanding the whole "falling in love" part of the book. Of course it had to be there, but I didn't really feel like it was developed as well as it could havae been. It just seemed to happen, and in a way, didn't make sense to me.
Oh, and we never really got to see what makes Brugel so awesomely different. I wanted to know more about Brugel.

Still, Ondine was an absolute pleasure to read, and if you've got an hour or two in which you want a good laugh without having to think, I absolutely recommend picking up a copy of this book!


Summary: This is a brilliantly witty fairy tale with a mystery that is as surreal as it is sinister. One girl. One boy. One spell to be broken. Ondine de Groot is a normal fifteen-year-old who lives with her family in the European country of Brugel. She has a pet ferret called Shambles. But Shambles is no ordinary ferret...He's Hamish McPhee, a boy cursed by a witch. A witch who happens to be related to Ondine. When Shambles turns back into Hamish t

emporarily, Ondine knows that she has to help him break the spell. He is the most gorgeous boy she has ever met and her one true love! He just can't remain a ferret forever. Can he?

Cover Story: I absolutely love this cover. It's sort of enchanting, in a way, which totally goes along with the feel of the book, which is, after all, about an enchantment. I actually like the Australian cover (which you can see all small-like to the left there) even more. It focuses more on magic and enchantment and less on Ondine's face! I like! :-)

Now, Becky from the Bookette knew how much I wanted to read this book, so she was so kind as to pass along to me an uncorrected bound proof. So nice, right? Well, since I immensely enjoyed this book, I want to pass along the love to one of my followers! Enter the form below to win a copy or click here to access the form on another page.

Posted by brizmus at 8:14 AM
Email ThisBlogThis!Share to TwitterShare to FacebookShare to Pinterest
Labels: 4 stars

This sounds really good! Nice review and thank you and Becky for the giveaway!

Loved your review. My 13 yr old grandaughter will enjoy reading this one and so will I. Thanks for the opportunity to enter.

This one sounds cute, oh and looks so cute.

Great review! This sounds great and I love both covers :)

Thank you very much for your review, and for hosting a contest to give away a copy!

Thank you also for showing both covers - I am so lucky to have two fabulous covers for the book.

Isn't it funny what a subconscious can create when you're not looking? I hadn't noticed how much meat they ate in Brugel - but it might explain their high rate of heart disease! I'll have a chat with Henrik the Chef to see if he can broaden the menu :-)

Thank you again, I am so pleased Ondine and Hamish gave you a good laugh.

Love this cover and I love your review. I love witty reads.

I love fairy tales! I would love to read this book!

This sounds like a good light read when one has a few hours to spare.
If the humour is as good as you say then one can read it just to up the happiness factor and probably not be too critical about the flaws.

I think my daughter would probably like it and I would as well.

This book sounds great! The plot sounds interesting and it seems like something I would really enjoy. Thanks for the giveaway!

I am an adult and love YA reads. Thanks for the sugestion, I love finding new authors and stories.

Thanks for the contest! Love the book cover. :)

Great review! This book sounds really interesting! Btw, doesn't the girl on the cover look a bit like Leona Lewis? (Or is that just me? :P)

This is not a book I would normally read, but your review makes it sound like a fun read!

You know, that observation that the author might just "not like" vegetarians makes me just slightly not want to read this book :(

Thanks so much for the post and giveaway. Yahoo.

Aaahh.. if it wasn't for your review, I wouldn't have known and wanted to read this book. Thanks! Sounds like a book I'd enjoy!!! Hope I win :)

Thanks for holding this.

It looks and sounds really fun

This book seems really interesting. I like funny books, and this one with a cursed prince turned into a ferret seems a good option to spend an afternoon laughing.

I really like fairy tales, I hope that I can read the book! :) I love yor review.

Ondine sounds great! I've seen it around a few times and the cover had me interested, but this is the first review I've read. And I'm pleased to say you've intrigued me :) I think the vegetarian remarks will frustrate me a bit too (being a vegan) but I deal with things like that in everyday life, so I won't pass up a good book. Awesome contest, thanks!

Ondine sounds like a fun and pleasurable read! You just made me add this to my wishlist. Aww, now I really wish I could win!