Interrupting this regularly scheduled French Friday program to present to you a blog tour. Be sure to check back tomorrow, as if things go as planned, French Friday will be posted on Saturday this week! 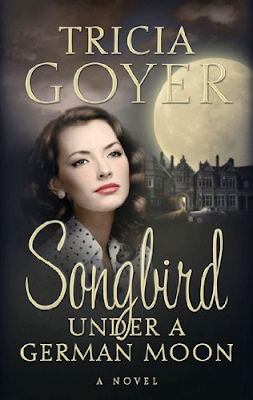 Title: Songbird Under a German Moon

Who Should Read It? If you like a little bit of historical fiction mixed in with your suspense novels, and you don't mind a little Christianity in the mix, this fluffy, fabulous read is absolutely for you!

What I Have to Say: Songbird Under A German Moon is one of those fluffy, feel-good mysteries that, despite the horrible things that happen along the way, leaves you with a warm, fuzzy feeling in your heart. It's nice to think that there are some good people amidst all the bad ones out there.

Betty, a singer in a canteen during the war, is psyched when she hears that she will be going to Germany to sing for the troops. She is glad to finally feel that she is doing her part. But when she arrives, she discovers that the war being over does not mean that things are all just fine and dandy. Betty is so sweet and pure and innocent and good; she will leave you wishing that everyone else in the world could be more like her.

Frank, a combat photographer during the war, has managed to come out clean and pure on the other side, but he's a little upset with his newest assignment - taking pictures of girls singing in Festpielhaus in Nuremburg, Germany. The upside of his mission is the beautiful Betty.

Frank and Betty together are just wonderful. They fit together like, well, like two peas in a pod. And it was so exciting following along with them as they tried to solve the mystery of Festpielhaus (even if I had already solved it before they even realized there was a mystery to solve). I would love to see them cracking cases again in future books.

What I liked most about this book, though, was all of the historical detail. I switched high schools at a weird time, and as such, I pretty much missed World War II history straight up. It was cool getting to learn a little bit about how things were in Germany after the war, learning about Wagner. I didn't know that a Wagner opera had supposedly "inspired" Hitler to start a mass genocide. Any book that makes me curious enough to want to read some non-fiction gets an A+ in my book, and this book absolutely did that for me.

In Songbird Under A German Moon, Tricia Goyer has created a beautiful love story combined with a historical and suspenseful mystery that will keep you turning pages even if you have already figured everything out. If you don't mind a little Christianity mixed in with your fiction, this is a fabulous read!

Summary (from Amazon): The year is 1945. The war is over and 21-year-old Betty Lake has been invited to Europe to sing in a USO tour for American soldiers who now occupy Hitlers Germany. The first nights performance is a hit. Betty becomes enthralled with the applause, the former Nazi-held mansion theyre housed in and the attention of Frank Witt, the US Army Signal Corp Photographer. Yet the next night this songbird is ready to fly the coop when Bettys dear friend, Kat, turns up missing. Betty soon realizes Franks photographs could be the key to finding Kat. Betty and Frank team up against post-war Nazi influences and the two lovebirds hearts may find the answers...in each other. But will they have a chance for their romance to sing? The truth will be revealed under a German moon. \

Cover Story: Bah, I don't dislike it, but I don't like it, either. I suppose I feel slightly indifferent.

Be sure to check out the rest of the tour here.

AND, if you want to win a copy, leave a comment on Tricia’s blog or send an email through her website CONNECT page and answer this question: What era in history do you wish you'd lived in and why?

Earn extra entries by signing up for Tricia's newsletter , becoming a Fan on Facebook or Tweeting about the contest on Twitter (use hashtag #songbird)!

You’ll be entered to win one of three signed copies of Songbird Under a German Moon.

Disclosure: This book was sent to me by LitFuse Publicity in exchange for a review.
Posted by brizmus at 11:44 AM
Email ThisBlogThis!Share to TwitterShare to FacebookShare to Pinterest
Labels: 4 stars

Sounds good, and I do like historical fiction. I usually finished the historybooks the week we got them ;)

Hrmmm.. It sounds good but not a grabber.

Excellent review. You have me considering it.

Liked your post. Someday I hope to write a book where the royalties will pay for the copies I give away.
:-)
Nikki

sounds good, works for me

sounds as a good read. history comes out well with Christianity. infarct Christianity is history so both blend just fine. we will look out for the read. coralspiritseo@gmail.com or www.coralspirit.com