Review: Once a Witch by Carolyn MacCullough 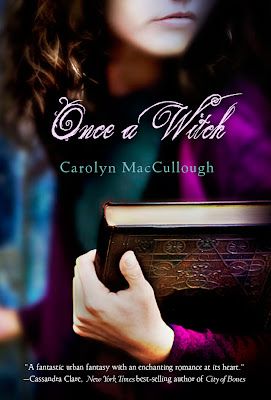 Title: Once A Witch

Who Should Read It? This is a light, quick-to-read urban fantasy for those who like reading about witches.

What I Have to Say:
This was really a cute story. I think that reading about witches is so much fun because they are exactly the same as us. . .just magical. We can wish to be them and imagine being them and dream that maybe someday we will be them because they are so close to how we actually are.

Carolyn Macullough's version of a witch story was even more translatable to our daily lives because of Tamsin's status as an outcast, something slightly different, from her family. Okay, so maybe none of us are actually witches (sadness!), and maybe none of us feel outcast by our families, but I think we can all relate to feeling as if we don't fit in, feeling as if we are just ordinary compared to a group of wonderfuls.

It is for this that Tamsin's story sat so well with me. She was just so real, so someone that every teenage girl can look to as she is going through that difficult, awkward phase in life. This is why, even though the story sometimes became ludicrous, and even though she wasn't extremely well-developed as a character (none of the characters really were, actually), I still found Once A Witch to be refreshingly delicious, packed with suspense, romance, action, and, best of all, MAGIC!

Now we go on to my one major complaint. I was totally loving this book up until the third chapter, when the main character became a smoker. Totally unnecessarily. It didn't fit with her at all, it didn't move the plot along, and all it did was annoy me. Especially later on when she was going between chain smoking and pacing when she could have just as easily paced all the time. I have trouble with books that portray people that I am supposed to like as smokers. If anyone has to be a smoker, it should only be the bad guys.

Given that that has very little to do with the story, though, I feel like I shouldn't really even be mentioning it. Tamsin is, in general, a typical teenage girl and a totally likable character. Her extended family is hilarious and fun, her relationship with Gabriel is awkward and expected, and the messes into which she gets herself are just ridiculous. This is one of those books, though, that it's easy to pick up, read in one or two sittings, enjoy while you're reading, and then immediately forget about. It's enjoyable and fluff, but it has no real staying power.

Summary: Tamsin Greene comes from a long line of witches, and she was supposed to be one of the most Talented among them. But Tamsin's magic never showed up. Now seventeen, Tamsin attends boarding school in Manhattan, far from her family. But when a handsome young professor mistakes her for her very Talented sister, Tamsin agrees to find a lost family heirloom for him. The search—and the stranger—will prove to be more sinister than they first appeared, ultimately sending Tamsin on a treasure hunt through time that will unlock the secret of her true identity, unearth the sins of her family, and unleash a power so vengeful that it could destroy them all. This is a spellbinding display of storytelling that will exhilarate, enthrall, and thoroughly enchant.

Cover Story: This cover, for some reason, doesn't really speak to me. I like the colors, and I like the idea of the old book, but there's something about it that seems lacking to me.
Posted by brizmus at 9:00 AM
Email ThisBlogThis!Share to TwitterShare to FacebookShare to Pinterest
Labels: 4 stars, IBBMP

Great review :) I love reading about witches too :)

Loved your review, this sounds like a great book! Such a shame I have to wait until september for it to be released here!

I liked this quite a bit. i can't wait toread more about Tamsin. I don't like the cover either but I read it on my Kindle

Nice review! This book sounds good! That smoking thing sounds unnecessary though. Come to think of it, I've read very few YA books where the main character smokes...