Review: the Elf of Luxembourg by Tom Weston 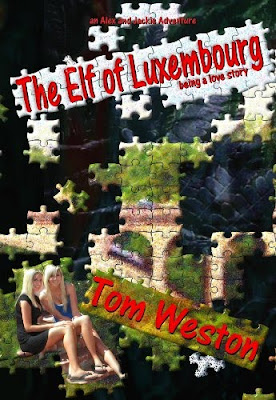 Title: the Elf of Luxembourg

Who Should Read It? Readers who are more interested in plot based stories than character based stories. This is a great book for those who love mysterious, magical stories that are full of history!

What I Have to Say:
The Elf of Luxembourg takes place in the present and the past simultaneously. In the present, we follow two very different, American sisters, as they visit their aunt and uncle in Luxembourg. They (very) slowly come to discover that there is quite a bit more to Luxembourg than they ever could have thought. In the past, we follow Cuchaquicha on his quest to refind his wife and give his message to the gods, after he has been taken into slavery by the Spanish and the vampires (aka the Germans).

What ensues is a story of magic, mythical creatures, mystery, and betrayal. And what's more: history. While I wouldn't go so far as to call this historical fiction, Tom Weston weaves historical fact after historical fact into his telling. He combined it with so much magic and folklore that I was left curious as to what was actually true and what wasn't - and as I always say, any book that makes me want to learn something can't be bad.

The best part of the book (in my humble opinion) was the story of Cuchaquicha. The things that he goes through to try to find his wife and get his message to the gods are exciting and mysterious and will have the reader turning page after page, wondering whatever is going to happen. The story of Alex and Jackie was also suspenseful and exciting - I spent the entire book wondering how the two stories were going to intertwine.

The writing style of this story was also very unique. The title "the Elf of Luxembourg: being a love story" really says it all. It's not outwardly a love story at all, except, through his style, it is obvious that the author loved his book and put a lot into it. It also has subtle undertones of love being something entirely different than what we think about on the surface, and through this new idea of love, it really is a love story. His style is poignant and to the point, and very thing descriptive. I think if you like the cover and the title, you will most likely enjoy the style.

Unfortunately, though, I found the characters lacking in development. I never really got to know any of the characters. Sure, I understood that Cuchaquicha was a good man, and I was able to see the kind of person that he was, but I never really got to know him. And Jackie and Alex, I felt like I knew them even less. They were two flaky, slightly annoying girls who supposedly loved to shop (though we never saw them shop), and that was all I ever felt that I knew. I never was able to get into their heads and see how they saw things. I have no idea how they reacted to the twist, and since I didn't really get a feeling for them, I couldn't even imagine. I also never really understood what made them special and unique. We were given just one word to explain it, and that word was never really explained. I found this frustrating.

Because of this, though the story was quite good and engaging, I felt as if it was lacking in a way. Because the characters could have been anyone, and I like to engage with the characters, to care about them.

Overall, though, I loved this book, and on the whole I had trouble putting it down. If you like magical, exciting stories and don't mind uninteresting (or, rather, slightly underdeveloped) characters, then this book is definitely for you. It's full of vampires and elves and and magic and even a mermaid. It takes an already exciting city and turns it into somewhere even more mysterious. Readers will enjoy his unique writing style and the massive amount of history thrown in!

Summary: What's an older sister to do? It's not all fun fairs and ice-cream. Well, it is - but that's beside the point. When one is in Luxembourg, there is a certain standard to maintain, and vacationing with Elves and Vampires is just so old school. But can Alex convince her younger sister, Jackie, of that? No, of course not, so she may as well get used to it. But deep beneath the ancient city of Luxembourg there lies a secret. The Vampires believe it is protected by the Elf. The Elf believes it is protected by a prophecy concerning Alex and Jackie. And the sisters? They believe shoes in Luxembourg are too expensive. Why are the Vampires going toe-to-toe with an Elf for the pleasure of the sisters' company? Why does the Elf think Alex and Jackie can sing? And just who let Sir Walter Raleigh and the Conquistadors into this story? To answer these questions will take all of the sisters' cunning, bravery and imagination, as well as some souvenir shopping. Because this is the Elf of Luxembourg and this is an Alex and Jackie Adventure.

Cover Story: I am a HUGE fan of puzzles, and I therefore love this cover! It's super cool, and it fits with the book wonderfully, as I spent a lot of time trying to puzzle all of the different pieces together.

Disclosure: This book was sent to me by Pump Up Your Book! for review. This in no way affected my review.
Posted by brizmus at 11:27 AM
Email ThisBlogThis!Share to TwitterShare to FacebookShare to Pinterest
Labels: 3 1/2 stars, pumpupyourbook

Thank you for this insightful review.

On a related note, for those who share our love of puzzles, we have a monthly giveaway for my facebook fans (http://www.facebook.com/tom.weston.readers), and the prize for the drawing on July 1st, 2010, is, in fact, a 756 piece jigsaw puzzle, based on the cover and original color photographs featured in The Elf of Luxembourg.

This is a unique, one of a kind puzzle (Well two of a kind really, I’ll have one and the lucky fan will have the other). The only eligibility requirement is that the winner be a facebook fan when the drawing is made.

Oh how lovely to get a comment from the author. It is so nice when that happens.

This sounds like an interesting book. The title is so original. I love the sound of the fantastical elements and the historical touches. I'm not so keen on the lack of characterisation though. I do need a strong character to lead me through.

More into character rather than plot based books I think I'll give this one a miss. Loved the puzzle cover though, very unusual in design I thought.

A good plot is very important to me as a reader however characters and their development make or break stories for me.

I do find the premise interesting though =)

Thank you for the review!