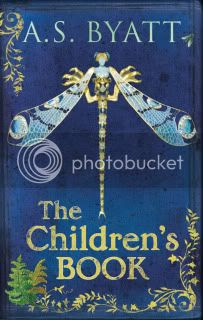 Who Should Read It? If you're a patient reader and you like beautiful language, this book could be for you! It's a long book that will make you think, and you need to treat it as such, taking the time to really understand what's underneath the surface of the families involved.

What I Have to Say:
Those of you that have been following my reviews for a long time know that I have a very interesting relationship with the Man Booker Prize. Occasionally I read something TOTALLY awesome that won this award, but in general, I find I'm just disappointed. Man Booker and I don't get along.

I had heard, though, that the books that are short-listed for the Man Booker prize have a tendency to be awesome, almost as if they choose the worst of the bunch to win. I was therefore able to overlook the words "Man Booker Shortlisted" on the cover of the Children's Book when I started it. It looked awesome, and that was enough for me.

Well, let's just say, I can see why it was nominated. It was full of quite a few of the things I have come to associate with winners of the Man Booker prize: flowery language that is sometimes beautiful but sometimes seems as if it is there just to confuse you, so many redundancies and repetitions that you often feel as if you must be having deja vu, and an incredible lack of any semblance of a plot.

That said, if those are things that indicate a Man Booker WINNER, I can also see why this book didn't win. The language is incredibly complicated and flowery, but it's also so beautifully written that, if ever you feel confused, it doesn't really matter. It's just so nice to be reading her fluid, gorgeous prose. And then there is the fact that, coupled with this is the occasional portion of a children's story, written in a completely different but equally magnificent style. I think it is a testimony to Byatt's talent as a writer that she is able to write skillfully in two completely different ways and have them mesh together so seamlessly and fluidly.

As for the lack of a plot, while it sometimes made the book a bit difficult to read, as I didn't always care about what was going to be happening, it wasn't important. Because "the Children's Book" wasn't so much the telling of a story, but the telling of a family, an intricate look at their relationships, their lives, and children growing up. Their story itself is the plot, and it spans over almost a lifetime. Following the characters, especially the children, as they grow up and react to the things that happen in their lives and the lies and truths that their parents tell them, can be intriguing and engaging for any reader. I think there is at least one story line for everyone.

But then there are too many story lines. I feel like Byatt tried to do more with this book than was possible in just one book. There were so many characters and so many subplots, and it left me feeling overwhelmed. Especially because, while most of these subplots were interesting, there were some that left me completely indifferent. They weren't well-developed, they were slightly uninteresting, and I often forgot about them when they weren't being told, which made it hard for me to follow. In the end, some of my favorite story lines weren't concluded, loose strings were left untied, and it was almost as if Byatt herself forgot about some of the story lines.

Because of this, the redundancies and repetitions were, in a way, actually a good thing. Because SO MUCH was going on that it was sometimes hard to remember what had happened or who was who, that having it occasionally repeated was helpful. But the redundancies also occurred on a smaller level. Sometimes I felt like there were three sentences in a row saying the same thing, and it just seemed totally unnecessary.

Then there were the setups. First, politics. I feel like maybe I was missing out on something, like there was something I should be getting that I just didn't because of some sort of political ignorance. I mean, in the 1800s, did anarchists and socialists get along? I tend to think of anarchy and socialism as being on two totally opposite ends of the political spectrum, and I feel like Byatt referred to them so easily and nonchalantly in the same sentence that it made it seem as if they're almost the same thing. Other than that, I feel like she spent SO MUCH time setting up background information, giving us an idea of what was happening at the time so that we could understand the characters and how they were and their reactions to things. It was good in that it did help me to have a better understanding of WHO all of the characters were and why they were that way, but it was also too much. So much of the story got lost in the endless backstory that had very little to do with the actual story, and it was hard to filter out what was necessary and what was only there to seem interesting. Her detailed summaries of British history were fascinating and well-written, but they did sometimes seem out of place.

Overall, this was a beautifully well-written book, but I wouldn't say it is for your average reader. It's a challenge to read, and it will make you sit up and think just when you were thinking you could stop thinking. In the end, I would say that I did enjoy this book (though I would have liked for more things to be tied up and for the overwhelming sadness I felt at the end to have SOME compensation), and I'm glad that I took the time to really savour it as opposed to trying to rush through it. If you're planning on reading it, I advise you to do the same.

Summary: A spellbinding novel, at once sweeping and intimate, from the Booker Prize–winning author of Possession, that spans the Victorian era through the World War I years, and centers around a famous children’s book author and the passions, betrayals, and secrets that tear apart the people she loves.

When Olive Wellwood’s oldest son discovers a runaway named Philip sketching in the basement of the new Victoria and Albert Museum—a talented working-class boy who could be a character out of one of Olive’s magical tales—she takes him into the storybook world of her family and friends.

But the joyful bacchanals Olive hosts at her rambling country house—and the separate, private books she writes for each of her seven children—conceal more treachery and darkness than Philip has ever imagined. As these lives—of adults and children alike—unfold, lies are revealed, hearts are broken, and the damaging truth about the Wellwoods slowly emerges. But their personal struggles, their hidden desires, will soon be eclipsed by far greater forces, as the tides turn across Europe and a golden era comes to an end.

Taking us from the cliff-lined shores of England to Paris, Munich, and the trenches of the Somme, The Children’s Book is a deeply affecting story of a singular family, played out against the great, rippling tides of the day. It is a masterly literary achievement by one of our most essential writers.

Cover Story: This cover is one of the most beautiful covers that I have seen in a long while, and if the aspect of the book from which the cover was taken has been more of a major plot line, I think I would have ADORED this book.

Disclosure: This book was sent to me for review by the publisher, which in no way affected my review.

Posted by brizmus at 2:11 AM
Email ThisBlogThis!Share to TwitterShare to FacebookShare to Pinterest
Labels: 3 stars

I must admit that I'm often disappointed by the books that win this prize but this does sound as if it could be worth the read. A patient reader though I tend to take things at face value rather than dwelling too deeply, I may well add this to my library list.

I think this was the most interesting review Ive ever read of a book--not sure Ill read this one though, it doesnt seem like the book for me and I had a hard time getting through Possession, though her writing was fabulous.

I read some very positive reviews of this book when it first came out but since then all the reviews have been pretty mixed, leaving me uncertain about this being the right book for me. After reading your review I've decided that I'll probably want to read it someday, but I'm not currently up for a book that requires too much effort. Thanks for the review!

Ah, this sounds delightfully postmodern. I've never been brave enough to try Byatt - of course, she's really well-known for Possession, which I've heard is equally difficult - and I think I'll probably skip this one, too.

I don't think you're alone in thinking it overwrought (even if you're into that kind of "flowery prose" and hard-to-find plot). Several professional critics kinda pooped on The Children's Book as well - though clearly, the Booker folks seemed to dig it.

As for the socialist/anarchist thing - that's really perplexing. You're definitely right that they're on opposite sides of the spectrum, but maybe simply because they ARE both extremes, they get along - though that makes even less sense. ;)

Sounds like a pass. Thanks for the awesome honest review.

I saw this at the bookstore at Christmas and have been wanting to read it.