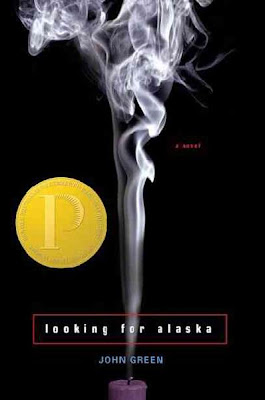 Who Should Read It? Teenagers of all shapes and sizes and adults who remember being teenagers!

What I Have to Say: This book begins with a boy who goes off to boarding school and starts smoking; I really thought there was no way I could like it. It was so immensely real and powerful, though, that disliking it was just an impossibility. Even with all the high school smoking.

before: Boarding school. If you've ever wondered what it's like to attend a merit-based boarding school, read this book. This is it. This is what my junior and senior years of high school would have been like if we had had as much freedom at my boarding school as they had at Culver Creek. The bond so immediately formed between Pudge, Alaska, and the Colonel is something that can only exist between high schoolers living in such close proximity; who spend all of their time together by default, by circumstance. It doesn't matter if they have anything in common. They are basically obliged to grow to know everything about each other so that their lives are literally cemented together. What happens to one happens to all; what matters to one grows to matter to all.

I was shocked and impressed by just how right on John Green's descriptions of their boarding schools lives and their relationships were. Reading, I almost felt like I was in boarding school all over again. Pudge, the Colonel, Takumi, Alaska, and Lara were all just so right, so real, so emotional and deel and intense and screwed up and wonderful. Discovering them and their lives and the bond they formed was like making friends. Alaska is practically bipolar, and it's exciting to guess what she might do next. Pudge, with his obsession with last words; the Colonel with his no BS attitude, Takumi with his raps - they all brought something to the group which, in a way, was more important than the individuals themselves.

after: I sobbed. And most likely, you will, too. Like it says in the summary "nothing will ever be the same." It won't. Not just in the book, but in your life. Because what happens and the way of dealing with it WILL affect you in a deep and profound way. It's edgy and gritty, and from it you'll learn a new way of coping, which in one sense is universal and in another sense is something that could only exist in a boarding school setting. After, the individual becomes key while still stressing the importance of the group.

Days after reading this book, I once again find myself crying while writing and re-thinking about what happened. I think it moved me so deeply because of my boarding school experiences, but I don't want to downplay the power of this book. I think if it doesn't move you in some way, you must be unmovable.

This was my first experience reading John Green, and let me assure you, it won't be my last. Read this book. Now!

Summary: Sixteen-year-old Miles Halter's adolescence has been one long nonevent - no challenge, no girls, no mischief, and no real friends. Seeking what Rabelais called the "Great Perhaps," he leaves Florida for a boarding school in Birmingham, AL. His roommate, Chip, is a dirt-poor genius scholarship student with a Napoleon complex who lives to one-up the school's rich preppies. Chip's best friend is Alaska Young, with whom Miles and every other male in her orbit falls instantly in love. She is literate, articulate, and beautiful, and she exhibits a reckless combination of adventurous and self-destructive behavior. She and Chip teach Miles to drink, smoke, and plot elaborate pranks. Alaska's story unfolds in all-night bull sessions, and the depth of her unhappiness becomes obvious. Green's dialogue is crisp, especially between Miles and Chip. His descriptions and Miles's inner monologues can be philosophically dense, but are well within the comprehension of sensitive teen readers. The chapters of the novel are headed by a number of days "before" and "after" what readers surmise is Alaska's suicide. These placeholders sustain the mood of possibility and foreboding, and the story moves methodically to its ambiguous climax. The language and sexual situations are aptly and realistically drawn, but sophisticated in nature. Miles's narration is alive with sweet, self-deprecating humor, and his obvious struggle to tell the story truthfully adds to his believability. Like Phineas in John Knowles's A Separate Peace(S & S, 1960), Green draws Alaska so lovingly, in self-loathing darkness as well as energetic light, that readers mourn her loss along with her friends. - Johanna Lewis, New York Public Library

Cover Story: I find this cover intriguing and slightly beautiful, and it actually took me a little while to figure out how it tied in with the book, which of course made me love it even more.
Posted by brizmus at 8:33 AM
Email ThisBlogThis!Share to TwitterShare to FacebookShare to Pinterest
Labels: 4 1/2 stars, YA

It was fascinating to learn a bit more about you. This sounds like a moving read. Thanks for the fantastic review.

I remember being a teenager - just.
I'm waiting for the teenage children of my friends to finish with this book so that I can read it. A very moving story by all accounts, I've heard a lot about it.

I really want to read this book too! It would be a profound read since you said that it sort of captured real boarding school life. Yes, I wanna read it!

I'm glad to see you liked this book! I just recently bought it and can't wait to read it :)

What a book, huh? I actually read AN ABUNDANCE OF KATHERINES first and then literally dashed to the bookstore to pick this one up. The last line makes me tear up every time I think of it.

A lot of people say that John Green writes beautiful and so real. I am curious for this book and the other books that he wrote. Going to check if the library has them. :) Thanks for the wonderful review.

Wow, awesome review! I've seen this book a lot at my local library, but I always dismiss it. Maybe I should borrow it the next time?