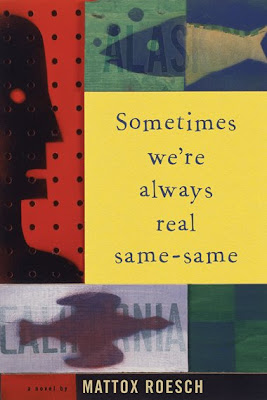 Who Should Read It? This is NOT a YA novel, and it couldn't be even if it tried. There are themes and language, etc. that I really don't think would be suitable for the YA crowd.
However, I think the majority of adults will thoroughly enjoy this book, as long as they're not hoping for an action packed adventure.

What I Have to Say: I'll admit it - the only reason I wanted to read this book was because the title sounded cool, and I liked the author's name, Mattox. But make no mistake, this book was powerful. It's also not about what you think it's about; the story is not the story you expect it to be.

It starts off when Cesar, an L.A. gang member, moves to small town Unalakleet, Alaska with his mom, a native Eskimo, when his brother is sentenced to life imprisonment for murder. When he arrives, he befriends his cousin, Go-Boy, and their relationship, along with Unalakleet, or rather, Unk, changes his life. One might even say it saves his life. And maybe it saves Go's life, too.

Go-Boy and Cesar are such well-developed, emotionally real characters that I wouldn't be surprised if I ran into them if I ever find myself in Unalakleet. The idea that the descriptions and reactions and emotions of these two people without them actually existing is just baffling to me. Even the lesser characters, some of whom we only saw once or twice, were so real, as were their struggles. I've read that some find these characters flat and undeveloped, but I disagree. I just found them REAL.

I think when it boils down to it, Sometimes We're Always Real Same-Same is the story of the importance of being loved, of feeling needed, of feeling connected to other people. It is also the story of hope. Roesch gets the feeling of living in a small, disconnected town down to a T, and each of the characters represents some different aspect of what it must be like. Go-Boy with his craziness and his idealism, Cesar's mom with her desire to be Native, Cesar with his desire to fit in, Kiana with her NEED to get out,. . . It moved me in such a way that I find myself desperately wanting to move to a small town like Unk, to live the life that I experienced so vividly through this book.

It's hard to really explain why, but there was something about this book that jumped out at me and screamed "Live life to the fullest! Be grateful for every moment!" Normally, I can tell if the feeling a book gives me is the feeling intended by the author, but in this one I really just can't. And that's a good thing here. Let people take whatever positive message they choose from it.

Mattox Roesch's debut novel is gripping and enchanting, and any reader will without a doubt find themselves wildly caught up in the emotions and the follies of all of the characters. This book is an extremely enjoyable read that comes highly recommended by Brizmus Blogs Books!

Summary (from GoodReads): Cesar leaves his gangbanging life behind in Los Angeles to help his mother reconnect with her estranged family in rural Alaska, where she hopes they both can get a fresh start. When Cesar arrives, he meets his college dropout cousin, Go-Boy, who believes he s part of a good world conspiracy and who bets Cesar he will stay in Alaska for a year. Here is Cesar ex-gangbanger from Los Angeles, seventeen years old, younger brother of a convict getting off a small bush plane, walking the gravel tarmac, meeting his rural Alaskan family for the first time. Here is Cesar, meeting his cousin Go-boy big hair, Eskimo Jesus tattoo on his forearm, a belief in heaven-on-earth. Here are the two, touring the tiny village in a busted up station wagon, stopping on the bridge at the edge of town, making a bet, I bet you stay in Alaska for a year, both staring through the windshield and down a road that just ends, both waiting for something. Here is where the story begins. Sometimes We re Always Real Same-Same is the account of two unlikely cousins and their parallel journeys through guilt and loneliness. A refreshing, coming-of-age story set in a location like no other, Cesar and Go-boy struggle with their matriarchal family and the quirky challenges of life in Unalakleet, Alaska. Inevitably, setting becomes its own character, pushing and pulling against the other characters. With his absent father and an older brother in prison for a gang murder, Cesar is badly in need of a male role model, even in this matriarchal society. In spite of being haunted by his passive involvement with an LA street gang and his older brother s involvement in a gang murder, Cesar believes his real life is waiting for him in California. He sees his time in rural Alaska as a temporary pit stop to help his mother reconnect with her estranged family. That is, until he meets Kiana, Go-boy s stepsister. Cesar muses that Kiana is the type of girl who can change everything, and after one drunken night of passion between the two, everything for Cesar does begin to change. He becomes split by his obsession for Kiana and his budding dependency on Go-boy. As Go s mental stability deteriorates, Cesar is forced to choose between fleeing Unalakleet, or staying with the family and community to help his cousin. Go believes the meaning of life is creating a heaven on earth, and he tries to rope Cesar into his cause. When Go-boy falls into a dark depression, Cesar struggles to understand Go s mental illness and the chain of events that led Go-boy to attempt suicide. It is then the two cousins realize that their strength has been in their similarity to each other, and to the community. Or as Go-boy puts, sometimes we re always real same-same. What Cesar finally discovers is how starved we are for the experience of tight-knit community, for being part of and known by a community, for better or worse, a very exhilarating and fulfilling and scary phenomenon that certainly penetrates into the DNA of Sometimes We re Always Real Same-Same.

Cover Story: What can I say, I don't like the cover. I find the colors completely unappealing, and the images say absolutely nothing to me. This is one book that absolutely should not be judged by its cover.

Disclosure: This book was sent to me by the publisher in order to give an honest review.
Posted by brizmus at 9:38 AM
Email ThisBlogThis!Share to TwitterShare to FacebookShare to Pinterest
Labels: 4 1/2 stars

Thanks for the review; I had no idea what this book was all about. I agree with you on the cover, kind of bland.

Indeed, great title and author name...! Unlike you I kinda like the cover though.

Every positive reviews I read on your blog automatically make me want to read these books right now. Love your reviews ! :)

good review. definitely something i would appreciate reading. i like the alaska setting too. you're right on the cover. it's not very appealing.

Wow, this sounds like a powerful book. I can understand why you were attracted to the title. I am too. It sounds like a hard-hitting novel but at the same time uplifting. I'll look out for it. Great review!!!