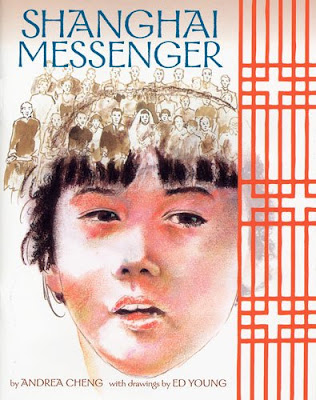 Who Should Read It? This is a great book in any multiracial classroom or for mothers with their children.

What I Have to Say:
I knew immediately that I was going to love this book. The title and the gorgeously illustrated cover were enough to tell me that. I was not disappointed. The illustrations remained beautiful and touching throughout the whole of the book, and the story itself was absolutely lovely.

It's an unfortunate fact that, even today, life can be very difficult for children of mixed American families. Often times, these children feel as if they have enough of each culture so as not to fit in anywhere. In America,they are foreign; in their "other" country, they are American. I have seen it happen time and time again that children will reject their non-American half, turning away from it, wanting to have nothing to do with it.

It is for this very reason that the existence of stories like "Shanghai Messenger" is so important. As the reader reads the story of Xao Mei's voyage to China, seeing how she slowly integrates and learns to cherish her Chinese half, he will come to understand that it is possible to be two different things at once. Just as Xao Mei comes to terms with the fact that, while she is American, she is also Chinese, readers of mixed background will learn that it is okay, and even a positive thing, to embrace their other culture as Xao Mei does.

Summary (from Good Reads):A free-verse novel about eleven-year-old Xiao Mei's visit with her extended family in China, where the Chinese-American girl finds many differences but also the similarities that bind a family together.

Cover Story: I think the illustrator did a GREAT job with this story, in general, and the cover is no exception. It is absolutely lovely!

Disclosure: This book was sent by the publisher in order to give an honest review.
Posted by brizmus at 9:34 AM
Email ThisBlogThis!Share to TwitterShare to FacebookShare to Pinterest
Labels: 5 stars, children's book

Wow, this sounds really different. It is great to see other cultures and ethnicities being represented in literature. Fab post!

I have only one thing to say: if it's a great read for a multicultural classroom, it's a great read for any classroom, even the most lily-white (esp. so). I love when teachers/parents use literature -- which by its nature allows you to really connect with the subject and the characters -- as a means of expanding children's worlds and making them realize that people are people, the world around.

Sounds awesome Briz! I love your reviews and how you're always looking for something fresh and different.