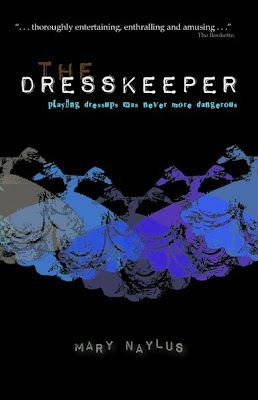 Who Should Read It: Anyone and everyone, really, as long as they are over the age of 12. It's great for its target audience, middle age girls, but I can also see it having a HUGE appeal in the YA or even adult market.

What I Have to Say: This creative, quirky story was an absolute JOY to read! Penelope aka Picky is absolutely HILARIOUS! She has no shame. She's a fat (or, as is said in the book, hefty), acne covered thirteen year old who doesn't even know what a Nazi is (I personally would have been embarrassed at 13 to not know about Nazis), and she is totally okay with it. More than okay with it. I couldn't help but laugh basically every time she reflected on something. And her brother, Ollie, whose role is very small, is also hilarious.

The premise of this book was fantastic. Picky tries on colorful, smelly, poofy (and hideous in her mind) old dresses and is miraculously transported back to the 17th century as the girl who wore the dresses. While there, she has to try to solve (and possibly stop) a murder. Naylus plays the time travel aspect expertly, and it is fun learning about the 17th century through the eyes of our shameless protagonist. The poo-covered streets, the people dying of smallpox, the hot slave boys,. . . Through Picky's eyes, we were able to see humour while at the same time understand the tragedy that was life back then. I was also kept guessing up until the very end; when the reveal came about, I was actually surprised, and that very rarely happens for me!

My only real problem with this book was all of the "Britishisms." I can't help but wonder if some of that will be changed for when the book is released in the US. There were times when I had trouble understanding some things because the expressions were totally foreign to me.

Naylus' approach to a time-traveling murder mystery was unique and fun, and the narrative itself was completely absorbing. I couldn't put this book down, and I actually had FUN reading it!

Summary (from GoodReads): This title is suitable for children of ages 12 years & over. When 13-year-old Picky's Mum forces her to look after Gran, who has dementia, she is accidentally locked in Gran's dusty old attic. There she finds a chest full of old clothes, and tomboy Picky is forced to don what appears to be a ball-gown when the freezing night temperatures hit. As soon as the dress is pinned together, Picky is transported back to the year 1700, where a man who appears to know her as Amelia is trying to kill her. Managing to get the dress off just in time, Picky returns to the present with the dress covered in blood. Did the man kill the girl called Amelia? Will wearing the other dresses in the chest take her back in time too? And will she be in danger again should she try it? "The Dresskeeper" uses a contemporary 13-year-old viewpoint to explore this murder mystery, set in the early 18th Century.

Cover Story: I like it. It's cool and creepy with the black and then the colorful poofy dresses sweeping across it. I feel like it fits the story well.
Posted by brizmus at 11:35 AM
Email ThisBlogThis!Share to TwitterShare to FacebookShare to Pinterest
Labels: 4 stars, YA

Great review! I have this sitting on my bookshelf and I definitely get what you mean by "Britishisms" - that was originally one of the reasons I held off on reading it. But it definitely sounds like a really cute story!

Wonderful review!!! I'd previously heard of this book, but now my interest in piqued and I'll see if my library can find an available copy through our shared-library Rolling Prairie system.

=D Have a Joyful Week!

Proper English is like a foreign language to me, This seems so cute

This sounds interesting and quirky. I had never heard of it.

Awesome review! I love this book, and since I'm British even the Britishisms don't faze me. Really glad to hear you liked it too.

Unexpected endings are goooood ! I love the sound of this book, been seeing it around for a while. Nice review ! :)

LOVED your review. You were spot on! This is such a funny book. I guess it is full of British phrases etc. Publishers must come up against this issue all the time.

Interesting book! I'd never heard of it before but sounds good :)

Delightful Review. This does sound like a cute read. What would a 13 yr old girl do in such a situation? Run screaming or hang on to see what happens. I really like this concept.

First I have heard of this book and it sounds like a very unusual heroine !

I check out a very more reviews and maybe I will add it to my wishlist.

I've had mixed feelings about this book, but after reading your review, I think I should pick it up :) Thanks!

Great review! I'd love to read this book!

This seems like a book I can love! LOL! Lovely review and thank you so much for introducing me to the book :)

Haven't heard of this book before but I think I should definitely take a look at it!