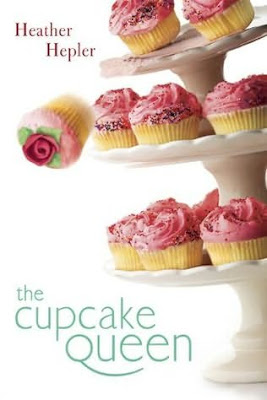 Who Should Read It? Despite Penny's age, I would recommend this more for a middle grade audience than a YA audience.

What I Have to Say: When her parents separate, Penny moves with her mother to the small town in which her mother grew up. Her mother opens a cupcake bakery, and Penny works in the bakery, mostly decorating cupcakes. It SOUNDS like a book that I should have absolutely loved. My parents are divorced, I ADORE small towns (and wish fervently that I lived in one), cupcakes are one of my favorite desserts, and I would LOVE to be able to decorate cupcakes anywhere nearly as awesome as Penny. Oh, and I love the Beatles, and Penny Lane was, of course, named after the Beatles song. So yes, all this said, I SHOULD have loved this book.

And yet, I didn't. Don't get me wrong, I really did enjoy reading it, and I smiled quite a few times throughout the book, maybe even laughing once or twice. And the story itself is definitely solid. And yet there was absolutely nothing special about it, nothing whatsoever to make me sit back and say "wow, that was great." It attempts to deal with issues such as loneliness, grief, separation, death and bullying, but really it mostly just ends up brushing over them. Penny is supposed to suffer, and she does, but I found her running back and forth from one issue another to another so much that I never really got a feeling as to what she was actually feeling and how she was dealing.

There's also the small issue of description. Even at the end of the book, I never had a clear idea as to what Penny and Tally and Blake and Marcus looked like. I spent the majority of the book wondering if Tally and Blake were actually dating, as it was never said explicitly, and there were minimal clues. And at the end, I did manage to understand why Penny and Marcus might fall for each other, but none of those reasons were actually there in the beginning when they knew nothing about each other, and I am still confused as to how they fell for each other (and why Marcus acted the way he did) when there was nothing evident about their attraction.

Already this review is getting slightly long, and I have done nothing but complain about this book, but I must give credit where credit is due. There were quite a few enjoyable scenes throughout the book, and as such, it was a very easy and enjoyable read. Also, her descriptions of the cupcakes and of Penny at the beach were vivid and beautiful.

If you've got some free time, and this book happens to be lying around, I say pick it up. You'll probably enjoy it. At the same time, I wouldn't go out of my way to try to obtain a copy. :-) I can also see, though, how this might more easily appeal to a middle grade reader than an older YA or "adult that loves YA" reader.

When her mother moves them from the city to a small town to open up a cupcake bakery, Penny’s life isn’t what she expected. Her father has stayed behind, and Mom isn’t talking about what the future holds for their family. And then there’s Charity, the girl who plays mean pranks almost daily. There are also bright spots in Hog’s Hollow—like Tally, an expert in Rock Paper Scissors, and Marcus, the boy who is always running on the beach. But just when it looks as though Penny is settling in, her parents ask her to make a choice that will turn everything upside down again. A sweet novel about love, creativity, and accepting life’s unexpected turns.

Cover Story: I love this cover! It's the reason I read the book. It makes me want to eat delicious princessy cupcakes! Yum! And the fact that they look like they are about to fall into a disaster - well, it's perfect for the book.
Posted by brizmus at 9:01 AM
Email ThisBlogThis!Share to TwitterShare to FacebookShare to Pinterest
Labels: 3 stars

That was a really interesting review to read. I sympathise with your frustration that this book just missed the mark. It does sound quaint and rather "Chocolat". Thanks for sharing. The cover is delicious.

Nice honest review. I think I'll pass on it though, not my cup of tea..

This sounds like a dangerous book to read if there is a lot of cupcake talk. It sounds like a cute book and I'm sorry you didn't enjoy it.

Yup, the cover does look tempting and delicious! I love cupcakes too! I am always amazed at how those cupcake bakers decorate the cakes so intricately beautiful. It must take them a long time to make sure the cupcakes look the same, right down to every detail!

Well, it sounds like a good book, perhaps to read on a lazy afternoon or maybe while enjoying a cupcake or two! :)

The cover is definitely a draw! I'm getting hungry just looking at it. :) I think I'll pass on this one though, and thank you for letting us know what your issues were with this book.

This book was great! But the whole time I was wondering what does Penny look like? There was no description whatsoever.

I know I never knew what Penny looks like. I think that's an important part of the book. Does she have black curly hair or blond straight hair? Does she have blue or brown eyes? Is she pretty?