Review: Sense and Sensibility and Sea Monsters by Jane Austen and Ben Winters 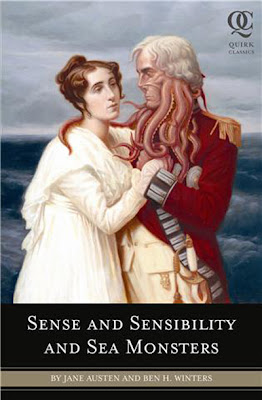 Title:Sense and Sensibility and Sea Monsters

Who Should Read It? People that enjoy mash-ups and don't mind changes to already great literature will most likely find this laugh-out-loud funny. This is a great intro to Jane Austen for those that might find her stories lacking in action.

What I Have to Say: I'm a HUGE Jane Austen fan. I've read and loved everything she ever wrote. I'm also a huge fan of monsters. I love reading books that are, in a sense, rendered ludicrous by their total lack of believability and by the overwhelming amount of monsters they contain. I was therefore sure that Sense and Sensibility and Sea Monsters was going to be a winner. Sense and Sensibility is a beautifully written masterpiece - add some sea monsters and that can do nothing but augment the awesomeness, right?

Unfortunately, wrong. It stayed just the same amount of awesome. I should have remembered that I don't normally like parodies. The sea monsters did absolutely NOTHING, in my opinion, to add to the story. Luckily, the story stuck pretty closely to the original, so I thoroughly enjoyed the reading experience, as if I was reading Sense and Sensibility all over again. The monsters, I found, just got in the way of the actual story. The biggest change for me was that I was disgusted throughout the entire thing by Colonel Brandon, whereas in Sense and Sensibility I was just slightly annoyed by him.

I also found myself getting bored with the bits that were devoted to the monsters, wishing they would hurry along so that I could get back to the actual story line of Sense and Sensibility. The added stories about Margaret and Lucy Steele were also both totally uninteresting to me, and it just seemed too obvious that they had been someone's attempt to add something unnecessary to an already fantastic story.

Still, I'm one of those crazy people that has been known to get bored from too much action, and I am sure that those that find Austen's original stories lacking in action will love these added changes and find that they help speed up the pace of the story while adding humor. I will say this for Ben Winter's added sea monsters - they did make me laugh. I enjoyed his lack of boundaries with the sea monsters he added. It seemed like anything and everything, as long as it involved water, was fair game, and this added spirit.

So, if you enjoy Jane Austen, chances are, you'll enjoy this, as I did. Whether or not you will appreciate the added sea monsters, I think, totally depends on your enjoyment of superfluous action and your sense of humor.

Summary: From the publisher of Pride and Prejudice and Zombies comes a new tale of romance, heartbreak, and tentacled mayhem. Sense and Sensibility and Sea Monsters expands the original text of the beloved Jane Austen novel with all-new scenes of giant lobsters, rampaging octopi, two-headed sea serpents, and other biological monstrosities. As our story opens, the Dashwood sisters are evicted from their childhood home and sent to live on a mysterious island full of savage creatures and dark secrets. While sensible Elinor falls in love with Edward Ferrars, her romantic sister Marianne is courted by both the handsome Willoughby and the hideous man-monster Colonel Brandon. Can the Dashwood sisters triumph over meddlesome matriarchs and unscrupulous rogues to find true love? Or will they fall prey to the tentacles that are forever snapping at their heels? This masterful portrait of Regency England blends Jane Austen’s biting social commentary with ultraviolent depictions of sea monsters biting. It’s survival of the fittest—and only the swiftest swimmers will find true love!

Cover Story: It mixes the two aspects of the book quite well, although I have to admit that it also slightly disgusts me when I look at it too closely.

Disclosure: Thanks to Anna at FSB Media for sending me a copy of this book to give an honest review.
Posted by brizmus at 7:10 AM
Email ThisBlogThis!Share to TwitterShare to FacebookShare to Pinterest
Labels: 3 stars

Did you read Pride and Prejudice and Zombies? I went into that not expecting to like it, but ended up thinking it was a hoot. Different author--maybe he did a better job?

It is hard to get my mind to accept monsters and Jane Austen. I would have to read to believe.
Should be alot of humor in the book,.

Great review. Doesn't sound like something I'd enjoy much but I did enjoy your review :)

All these adaptations scare me. I just read a book for work that will come out I-don't-know-when and of which I will not give the title, because I'm not sure I'm allowed to. Anyway, it's another free adaptation of a classic (not Austen, but known all the same) turned into a vampire story. I felt exactly the same way as you did with this one : it didn't add anything to the story. It was like reading the original novel a second time, with a few vampire things added. I thought it was way too easy, and not interesting at all.

I'm going to read Pride and Prejudice and Zombies though, I want to see how this one works out.

Thanks for the review !

Yeah, I pretty sure I'm going to be skipping this one...

I kind of expect to feel this way about these mash-ups, so it's good to read this review and realise I'm not missing out by avoiding them. I'm saving myself for one of the Little Women mashups with vampires or werewolves - because I figure just one of this type of book will be a novelty and still worth checking out. Hopefully.

I have to admit that I'm not much of Jane Austen fan so this isn't a book that appeals to me anyways, but I loved the book trailer.

Good to be back, many thanks for your best wishes.

An interesting post, I was intrigued by what you had to say. I read the zombie take on P & P and must confess that I didnt like it but, for all that, I'm very tempted to read this book just to see what this author does with the story.

I haven't read it yet, I hope to did it soon

Im also a fan of Jane Austen novels and not long ago i read Pride and Prejudice and Zombies. Its not that i didnt like it but i prefer the original novel. I might give this one a try too.

I have got this one on order from The Book Depository but it hasn't arrived yet.

I have read a similar review to yours which is also not quite sure about the parody and I must admit that is also my feeling but I though I needed to give it a try anyway and see what I think.

This book sounds interesting, but I don't really like the cover.

Oh dear, that's a bit disappointing
But as a great Jane Austen fan I would still be interested in reading it.

I really want to read this, it sounds really fun and cool.

Thanks for this. Usually I read about people loving this book but I like to hear all angles.

I quite enjoy mash ups. But this one doesn't sound as much fun as I would have wanted it to be :(

Definitely a big fan of Jane Austen but I can't say these books are for me. Probably won't be reading this.

I really enjoyed your review. But I'm not really tempted to read any of these mash-ups, except maybe the one about Abraham Lincoln as a vampire hunter. LOL

This is a fad of the moment to me. And I'm just as happy reading your review as in reading the whole book.